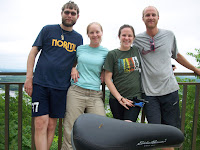 Big news!
We’ve officially made the first step of our next adventure: purchasing a one-way ticket to Bangkok, Thailand on July 21. Thus begins our South-East Asian Bicycling Adventure!

Thankfully, we’ve got over a month to finish getting ready, since there are oodles of miscellaneous things to do, nevermind that we are as busy as always enjoying life. Of late we’ve been slowly purchasing necessary items, roughly planning our route, and have begun our bicycle training in earnest.

There will be much more information to come soon, but roughly speaking here is our trip itinerary:

July 21 – Fly to Bangkok from Los Angeles (we’ll be there for a Muth family reunion)
where we’ll travel around Thailand without our bikes until we get adjusted to the humidity (ha), and wait for the other members of our bike crew to arrive

mid-December – fly back to Denver, CO

Christmas – we’ll be in Wisconsin with Liz’s family

Perhaps you’ve got (at least) two questions already…
1. What bike crew?
2. Why no travel agenda – what are you going to DO?

1. Well, after 2.5 years of traveling/working abroad as a couple, we’ve managed to convince (quite easily, actually) three of our friends to join us on our next journey.

2. Just like our prior trip, we don’t want to have an exact agenda. No plan is the best plan for long-term independent travel, because then you can be infinitely more flexible. If we like someplace, we have the luxury to stay there for a while, since we don’t have pre-set times/places we need to be. That said, our time schedule on this trip will be significantly tighter than when we went to India: not only do we have a certain return-date, but because we are traveling by bicycle, the number of days spent traveling will be exponentially higher than if we were using more usual methods of transportation.

Guess that leads to questions:

3. At home in America we are avid bikers, both as a method of transportation and for fun. Of course, we’re avid lots of things, so we don’t exactly live on our bikes, even though we do take them everywhere with us thanks to a handy bike rack.
But we wanted to do a bicycle trip as a new challenge, and at first we were thinking of doing so in America, either out west or in the southeast. Then we figured southeast ASIA would be cheaper and more our style…
We’re going to be buying “Merida bikes Matt 5V model 2009” in Thailand, though we’ll hopefully sell them back to the shop we buy them from if we haven’t completely destroyed them after 4 months on the road. We think riding bikes will not only whip us into shape extremely quickly, but will also allow us to see the four countries from a perspective often missed when traveling by our more usual modes of transport.
While perhaps viewed as a bit unusual, bicycling in SE Asia is relatively common, particularly amongst Europeans. Presumably we’re going to be covering more ground than a vacationing family, but that’s pretty irrelevant, point is this is a somewhat beaten path we’ll be treading on, so we know there will be adequate roads and hotels- which is all we really need anyway.

You can check out our complete equipment list (still being updated) here:

(to be added very soon 🙂

but we will be wearing helmets to avoid brain-splatter, and carrying a tiny netbook to stay well-connected and waste less valuable daytime sitting around in internet cafes. We learned our lesson last time, spending hours updating this, checking emails, and uploading photos. Now we can waste that same amount of time and more in the evening 🙂

So that’s what we WILL be doing, here’s what we’ve BEEN doing of late:

After our first run through the Colorado -:> Iowa -> Wisconsin loop, we found ourselves out in Utah to visit our friends Steph & Jeremy in Ogden. After five fun days with them, including some camping / hiking, disc golf, and cute puppy petting, we headed back to Colorado by way of Arches National Park. The park is mostly car accessible, although some of the stone arches require a small hike to get to the best viewpoints. It was definitely impressive, to say the least.
In Colorado we visited with lots of friends, including Emily up in Leadville (where we relaxed next to a mountain stream), Chris & Katie in Estes Park (where we fished in a stocked pond and went to Rocky Mountain National Park), and we caught some great music with Brooke & Dan.
From Colorado we drove to Illinois for the Summercamp Music Festival, over Memorial Day weekend, which was a bit underwhelming overall, although we did see some good musical performances (MSMW, Bassnectar, Umphrey’s McGee, Girl Talk to name a few). En route we stopped to see Blake & Sarah in Omaha, which provided a relaxing break from the lengthy drive, as well as a peek into the professional lifestyle we have thus far avoided – thanks guys!
We then spent about a week RV-camping (thanks Luke) out at Sugarbottom State Park near Iowa City, biking, disc golfing, canoeing, and mountain biking – when it wasn’t raining. Joni also graduated, and syringe shots in Monticello led to an awkward hot tub experience… you’d have to have been there 🙂
Next up on our tour of northern-middle-America was the city of Chicago, for a weekend with our recently-married friends Jenn & Jake. We bummed around the city, caught a US Men’s National Soccer Team match (2-1 over Honduras), celebrated Jenn’s birthday, and visited the Bahai temple there.
From Chicago we went back to Iowa, where we met Luke & Christine in Guttenberg for some serious bike training sessions. We did two days of biking, 36 miles of hilly roads between Guttenberg and McGregor for the first day, and then 30 miles of trails outside Dyersville on the second day. Not really as hard as it sounds, after the first 20 minutes or so of bike-riding your legs loosen up and it becomes mostly and unconscious action, though we were definitely still exhausted after each day!
Now we are up in Wisconsin, and we’ve already had a jam-packed 5 days. The excitement of the summer so far has been the birth of Liz’s brother, Zach, and his girlfriend Nikki’s first child. 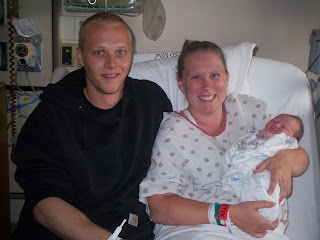 Jaksen Bradley Peet was born at 1:27pm (7lbs 10oz 19 3/4 in) on Friday, June 12, happy and healthy in Rice Lake, WI. We were in the hospital when it happened, but wisely avoided the placenta and such, showing up later for plenty of photos:
Other than the miracle of life, we’ve been catching some fish lately with our recently purchased annual WI fishing license – 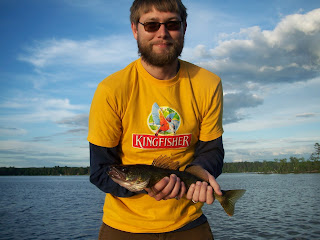 Anderson’s 17-1/2″ walleye is the highlight thus far, doing some biking (to Barron and back to see our nieces and nephews, and on the Tuscobia Trail), and we just spent the past weekend camping and fishing in the rain. It was still fun though, especially one the fire dried us out :-).
We’re about to leave now to go see our nephew in a skateboarding competition, and then next week we’re taking all the kids camping – should be an adventure!
_______

Yes, the blog’s been revamped, and it now has pictures. Bout time we get with the program, eh?