It’s been a busy few days of road-travel, as we work our way across the American Southwest. This is being typed en route, actually, so currently we’re in the desert between Flagstaff, AZ and Barstow, CA. We’ll be staying in Barstow this evening, which is exciting mostly because the hotel has a pool in addition to the wi-fi!
Today is going to primarily be a travel day, not only because we need to cover a lot of miles, but also because most of the destinations are too far off of I-40 to visit when you’re in a rush. That means we’ve decided against the Grand Canyon – four hours of driving for a few photo ops isn’t quite worth it when one travels with their parents :-). Thankfully, yesterday involved more than enough touristic activities to satisfy even us!
We started our day, departing from Grants, NM, by taking scenic by-way 53 so we could stop by a place nicknamed “Fire & Ice.” The “Fire” comes from the ancient Bandera Volcano – which we climbed – and the “Ice” comes from a perma-frozen cave-lake at the edge of a collapsed lava tube. 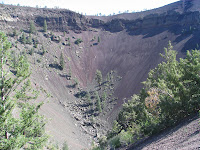 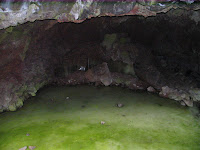 As you can see from the photos, the landscape was definitely dynamic and diverse. The volcano was quite impressive because we could see the path of the lava flow during our walk to the edge of the crater, while the ice-cave was literally freezing – a nice break from the desert heat – as we descended down into the cavern. Definitely a lucrative tourist trap for the family that owns it, but overall it was very interesting.
Next up was nearby El Morro National Monument, which features not only an impressive bluff with native American housing remains on the top of it, but also has quite the historical graffiti collection. Hundreds of signatures and drawings have been carved into the soft sandstone rock, ranging from Spanish explorers, to gold seekers, to early American travelers. There is a deep pool of water located at the base of the bluff, which certainly explained the site’s popularity! 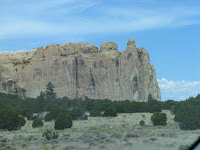 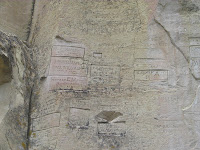 After our best meal yet, at the roadside Stagecoach Cafe in Ramah, we then drove a while to finish our tourists’ trifecta with… the Petrified Forest National Park. Located in eastern Arizona, the park combines spectacular views of the painted desert, along with a plethora of petrified wood in its natural setting, and then throws in a few native American petroglyphs for good measure. Perhaps you can tell, but all three were impressive and very photogenic! 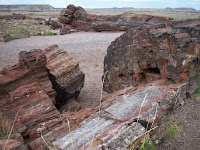 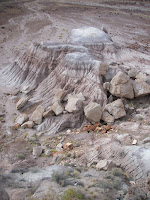 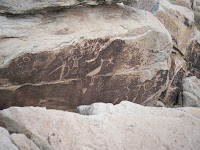 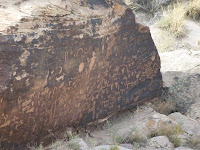 We spent last night in Winslow, Arizona – which if you’re an Eagles fan you’ve undoubtedly heard of – though virtually all of our time there was spent either eating to recover from starvation, or sleeping to recover from exhaustion. Thankfully those conditions, from our modern perspective, are nothing like what it must have been like for those intrepid adventurers whose footsteps we are so loosely following.
Coming up is a weekend of family fun in and around Redondo Beach, CA, which will undoubtedly involve a bit of touristing – currently we’re contemplating the Getty Museum in LA, and hopefully a winery on the way into the city – we shall see.

Crazy that we’ll be in Bangkok in less than a week, and riding our bikes in about three…