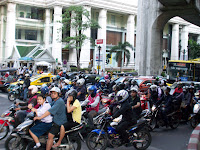 Let’s see – it’s cleaner, calmer, and cooler than initially expected. Maybe India has jaded our traveler’s eyes, but when we think “developing world” we expect to see garbage, animals, and beggars everywhere in the streets. However, so far during our brief wanderings about the city we haven’t seen much of any of them. Once jetlag has left us alone a bit more we plan on being touristic, and perhaps that will slightly alter our opinion, but today we did ride the SkyTrain to go and check out our bikes. We finally met Fausto, the owner of Bike Zone, where we are purchasing our bikes from. He’s a great guy, our bikes look fantastic, and he’s even nicely storing some of our stuff for us while we are traveling around for the next two weeks! 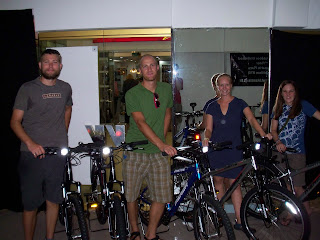 Everyone has arrived, except Blaise who will be showing up Sunday night. This means we’ve been to the airport three times already, which isn’t so bad since we can catch a bus direct to the airport from nearby our hotel. We are staying at Sukhumvit On Nut Guesthouse – the goofy name is due to the two main nearby streets. Don’t worry, we haven’t quite gotten over the fact that we’re staying “ON NUT” either :-).

All the food we’ve had so far has been spectacular, lots of fresh vegetables and spices in every dish. Luke, as a vegetarian, is having to work a bit to get his preferred style of food, but that’s primarily due to our inability to read the restaurant menus. Thai is a pretty, curvy script, but that doesn’t really help when we’re trying to decipher what has meat and what doesn’t. Thankfully pointing, looking helpless, and taking a gamble has been successful so far.

We’ll post more soon, but despite having done a minimum of adventuring, we are definitely so exhausted that going out on a Friday night doesn’t even sound appealing…