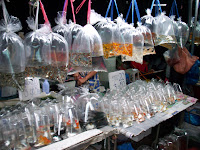 While we laid low on Friday night, we’ve ended up having a couple of crazy Bangkok days and nights since. Without divulging TOO much information, our Saturday involved the interesting dichotomy of the large traditional Chatuchak Market during the day, and some late-night adult and club adventures at night. The market was sprawling and quite impressive, not only for the variety of goods available, but also for how friendly all the sellers were. The market was quite clean, mostly devoid of gross odors, and our lunch there was delicious. Anderson’s written an article about our experiences, that obviously goes into much more detail, so hopefully that will be available on Holiday Fu shortly.
Since we stayed up until past 8am, the majority of Sunday was spent in slumber, not-so-easy given the heat and humidity, but we all managed to sleep pretty well nonetheless. Sunday night we headed back to the airport to pick up Blaise, and so by about midnight our entire team was officially assembled. Of course we (again) stayed up late, but that’s pretty much our MO until the cycling begins.
Yesterday we were again up for the challenge of exploring Bangkok’s sprawling sites. We rode the SkyTrain across the city to the Chao Phraya River, where we boarded a public boat. 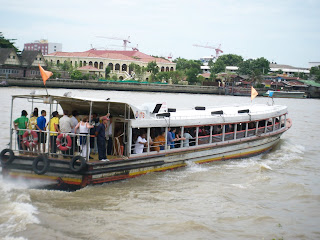 For only 30 baht we rode up about a third of the river, disembarking quite near the infamous Khao San Road. Other than plenty of touts, and the typical tourist ghetto wares, there wasn’t really much going on, so we hopped into some tuk-tuks to see some temples. We tolerantly agreed to endure some sales pitches at a tailor shop and a massive gem store, in exchange for a free ride. Our drivers were great young guys, so the whole experience was pretty fun, since we knew what we were getting ourselves into. 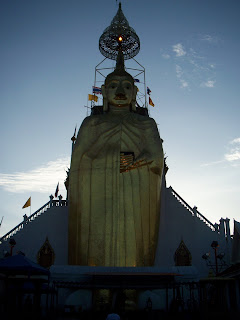 We saw the much-hyped “Big Buddha,” at Wat Indravihan, although what we wanted to see was the reclining Buddha at Wat Pho – we’re planning on heading there sometime soon.
After our temple tour, we decided that Blaise needed to experience the seedier side of Bangkok, so the tuk-tuk drivers dropped us off at a non-descript building in some random neighborhood. Inside was the infamous Ping-Pong Show. Use your imagination, and then some, and you’ll get a rough idea of what was going on. Needless to say, it was at times very far from sexual, like a low-budget Cirque Du Soleil involving certain female body parts. Not exactly entertaining, but certainly intriguing. We summed it up as something your curiosity forces you to see once, but you’d definitely never go again. Definitely.