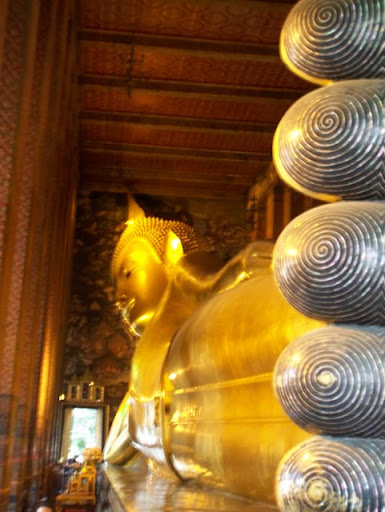 On Tuesday we finally realized our dream of laying eyes on the Reclining Buddha at Wat Pho. Part of a massive temple complex, that looks like the set from the as-yet-unfilmed Candyland film, the statue itself is housed in an enormous building. Truly, the magnitude of this religious icon is done no justice by our photos – it is simply giant. Representing the moment when the Buddha obtained nirvana, the entire Wat is very peaceful and serene, despite the omnipresent camera flashes. The remainder of the temple complex, besides being a bit complex to navigate, was also impressive, full of brightly colored spires, devotional halls with Buddha statues, and plenty of gardens to relax, contemplate, or meditate.
We did manage to wander about a bit during the rest of the day, getting traditional Thai massages in the morning, and in the evening stopping at the massively modern MBK Building where we purchased some business cards; however, our evening plans of going out were waylaid by an UNO-filled evening and a relatively early pass out. Wednesday became a bit of a business day, with us dividing up be more productive. Anderson & Luke headed to the train station to purchase our overnight tickets to Chiang Mai, while Brian, Blaise & Liz did a little cycling and suit shopping. We all reconvened mid-afternoon, loaded up our packs, and journeyed across town for our 6pm train. The key problem with traveling right now is that all of our baggage is optimized for bicycle travel, not land travel, so currently we have to awkwardly carry panniers and dry sacks slung over our shoulders!
The train was waiting at the station when we arrived, so after purchasing some important provisions, like whiskey and chips, we got onboard. 2nd Class A/C was definitely quite nice, our benches handily converting into beds for sleeping. We got dinner, not too bad at a deal at 150 Baht if the taste of the generic curries could be ignored. Everyone on the train went to bed pretty early, as did we when exhaustion kicked in around 10pm. We awoke at 6am, the congested city of Bangkok having been exchanged for lush, green mountainsides. Breakfast arrived soon, tasting somewhat better than dinner, so far as a cheese, lettuce, and tomato sandwich can. Disembarking, we avoided a few hotel touts, before taking a Songthaew to a somewhat randomly selected lane outside of the main tourist ghetto. Without a destination, we just divided up and checked out several guesthouses before settling on Finlay Bed & Breakfast, which at 250 Baht/person including breakfast and A/C, was definitely in our price range.
Given that our train arrived only a little while after 7 am, we were excited to actually have a full day of adventure ahead of us. The tricky part was figuring out what to do! Chiang Mai is known for its temples, and for being more relaxed than Bangkok, but it is still a large city with over one million people. So at first we considered renting some bicycles, but after talking to another traveler who was staying at our hotel, we decided that scooters, or motorbikes as they are known here, would be a better bet. More fun, only slightly more cost, and the ability to travel well up into the surrounding hills clinched it for us. 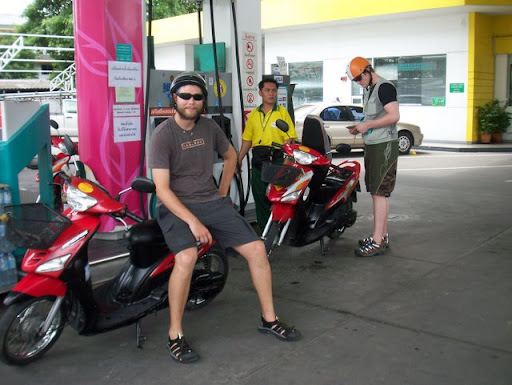 After some bartering, we got four automatic scooters for 850 Baht, which included helmets, one liter of petrol, and insurance in case anything unfortunate were to arise. Not to ruin the end of this blog post, but we didn’t need the insurance, thankfully. We’d heard that there was a fantastic temple 16km west of Chiang Mai that also would provide splendid city views. First, however, we spent time cruising around the city, getting used to being on the left-hand side of the road, and checking out a few other temples we’d read about in Lonely Planet. After a few wrong turns, and a bit of circling about, we found ourselves at Wat Phra Singh, an immense Wat full of impressive imagery and icons, as well as a large garden area with a plethora of Buddhist sayings in Thai and English. 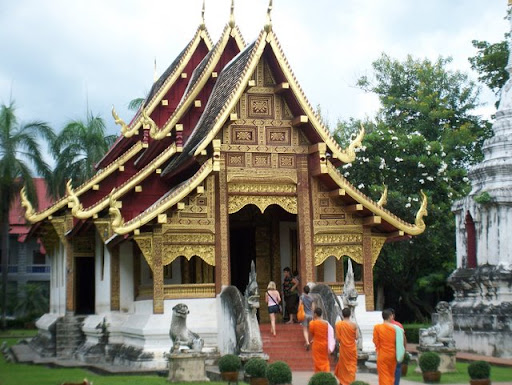 We thought there were plenty of Buddhas about, but our next destination, Wat Chiang Man, was practically overflowing with statues of Buddha. We find it iconically ironic (or ironically iconic?) that Buddha didn’t want himself worshipped as an idol, and yet Thai Buddhists did not get that memo apparently! But the statuary were all impressive, almost always at least flaked in gold, and in plenty of positions. Reclining, fasting, teaching, praying, etc. were all represented, sometimes in the same hall. Monks were usually about as well, so chanting could be heard as we walked and gawked.
Elephants played a predominate theme as well as other animals, but the former were stone while the latter were live cats and dogs. 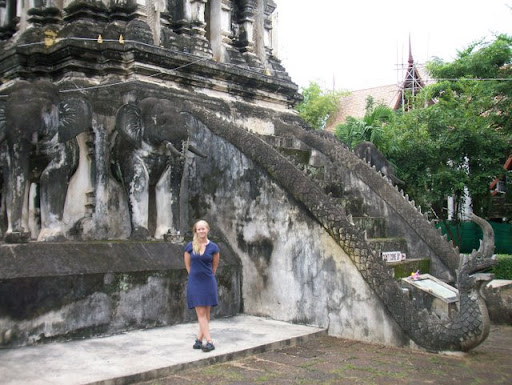 In between those two temples we enjoyed a delicious Thai lunch, full of pad thai and some spicy local noodles. We also went overboard on beverages, our table full of 25 Baht smoothies and shakes. We gotta fight dehydration whenever we can, as the humidity here is infinitely more draining than you’d think. Next up on the agenda was the long ascent into the hills to Doi Suthep temple. The climb was slow, even on motorbike, as getting past 40km/hr proved difficult. The endless S-curves were quite enjoyable, though we were glad that the weather was clear as it definitely could’ve been dangerous otherwise.

We stopped briefly at a lookout point, for the prerequisite photos, as well as an icy lemon juice, before driving up the last few kilometers. At this point the clouds all around us startled to drizzle a bit, and we were more than happy to scurry up the temples 305 steps to shelter. Thirty Baht later we were walking about barefoot and amazed. Seriously, the number of collection boxes requesting donations practically outnumbered the Buddhas, and the Buddhas numbered in the thousands. Of all shapes and sizes, the coup de grace was the stunning Emerald Buddha. 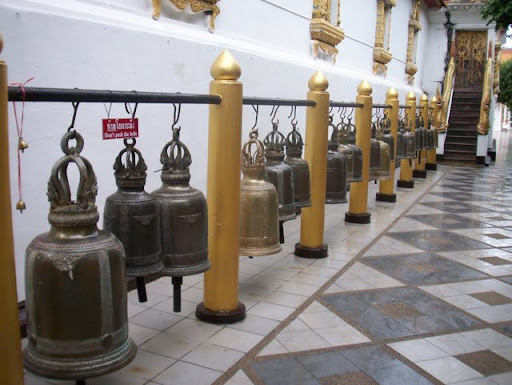 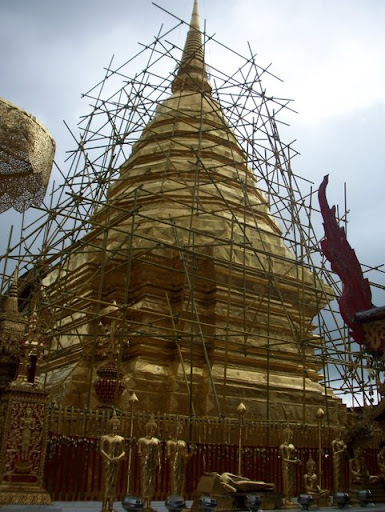 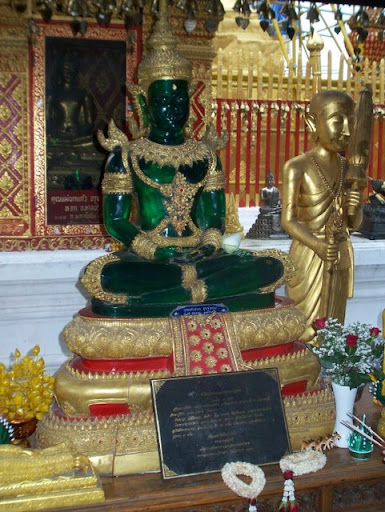 For added effect, the skies literally opened up as we arrived in its presence, rain pouring all over the gold-encrusted and under-construction central pagoda nearby. Thankfully a respite came soon enough, and we were able to emerge only damp and hungry. A nearby noodle and rice restaurant recharged us for our descent down the mountain, and despite being splattered by raindrops we rode our way down. We pulled over about halfway, since we wanted to ride an extra 3km to see a signposted waterfall.

While pausing momentarily at the entrance gate, Mother Nature took control again, and the true monsoonal onslaught began. Monsoon rain might not always fall hard, but when it pours out from the sky it drenches everything in its path. You don’t get wet when you walk around in it, you simply become soaked instantly. 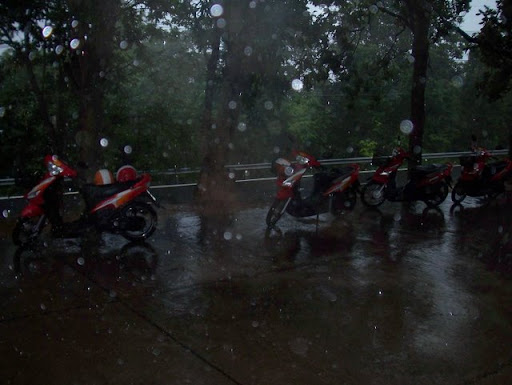 Our plan of waiting out the rain failed, as darkness started to become an issue, so despite the downpour we drove deep into a valley, curving around on a small road. The waterfall paled in comparison to the journey, for riding out of the valley bordered on downright danger. Steep hills, both up and down, were slick beyond belief, and at times our shoes became additional brake pads. Thankfully we emerged unscathed, able to laugh at our predicament, but the relief when we finally reentered Chiang Mai, and conveniently simultaneously departed the storm, was palpable. Despite getting separated, we all managed to wind our way back to our hotel decently effectively. We did definitely get some looks, as foreigners on the roads at night are pretty rare. 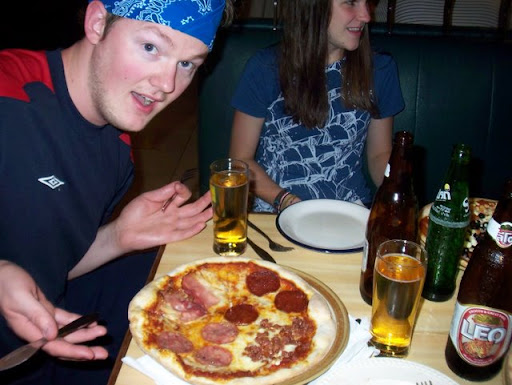 Dinner was pizza, and we managed to find more of the doxycycline (for malaria) that we all need at the low, low price of three Baht/pill, so the night was a definite success, too. Drinking beers and listening to music at our hotel made a pleasant nightcap to a day full of Thai adventure. Today, Friday, the plan is to lay low in general, but tonight we’re going to go to a Muay Thai fight. We’re not exactly fight fans (but then, we’re not necessarily all Ping-Pong fans but that didn’t stop us from seeing the infamous show while in Bangkok), though the spectacle alone, plus the fact it’s an authentic local experience, should definitely make it worth it.