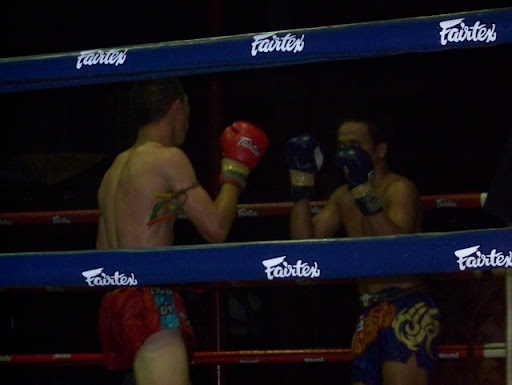 Picking up where we left off, Muay Thai ended up being quite interesting, and certainly authentic. We’ll overlook the fact Liz passed out mid-evening, or that Anderson lost 50 baht gambling, since eight fights in a row is certainly a lot to endure without distractions arising :-). Many of the fighters were very young, there was one 30kg fight between literal boys, and plenty of other battles were in the 40-45kg range. The top fight, billed as Heavyweight, was between two 90kg warriors. However, all the fights were entertaining, and while foreigners outnumbered local fans, everyone was enthusiastic and, it seemed, at least somewhat intoxicated. Singha Beer was the official stadium sponsor, and Thai culture is certainly relaxed about drinking – like Korea it is literally available everywhere. 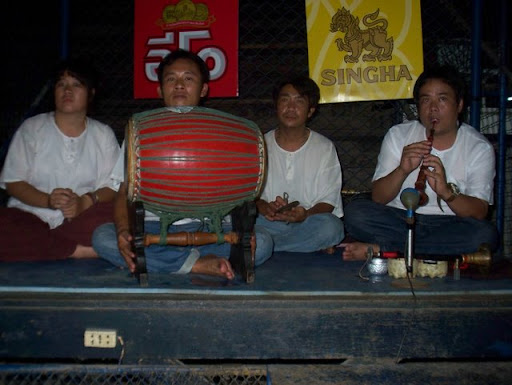 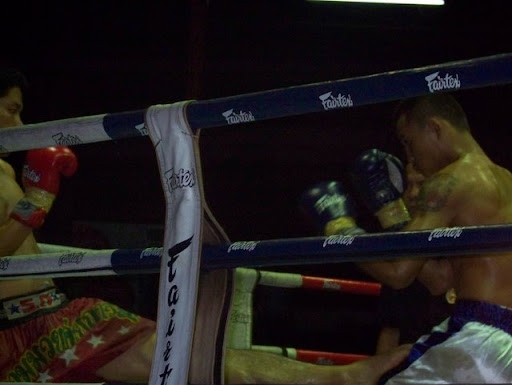 After the Muay Thai, Blaise and Anderson ended up wandering the streets for a while, which resulted in them witnessing a stopped tuk-tuk getting smashed into by a woman on a speeding motorbike. From about 10 feet away, it definitely was a bit of a shock, and ruined any chances of them getting a ride. Thankfully the woman appeared to be alright, although she probably wasn’t going to be driving anywhere for a while…
Earlier in the day we’d wandered around, stopping at a few travel shops, looking to book a “Hill Tribe Tour.” There are a plethora of options here in Chiang Mai, but we wanted a lot of bang for our buck, even if it meant being uber-touristic. The tour we wanted was a one-day trip, including two hill tribes (Karen & Hmong), plus a one-hour elephant ride and a one-hour bamboo raft ride. After some price shopping, we got it down to 600 Baht/person, with Mr. Whiskey Tours. So Saturday we awoke around 7:30, sleepily showering and downing breakfast in silence. After a short walk to the travel shop, and a water pickup (sorry, no whiskey) at 7-11 (they have the best deal, 1.5 liters for 12 Baht), we were ready to go when the minivan pulled up. Our guide was a man named Po, who not only spoke excellent English, but was very fun-loving and informative once we’d warmed up to each other. 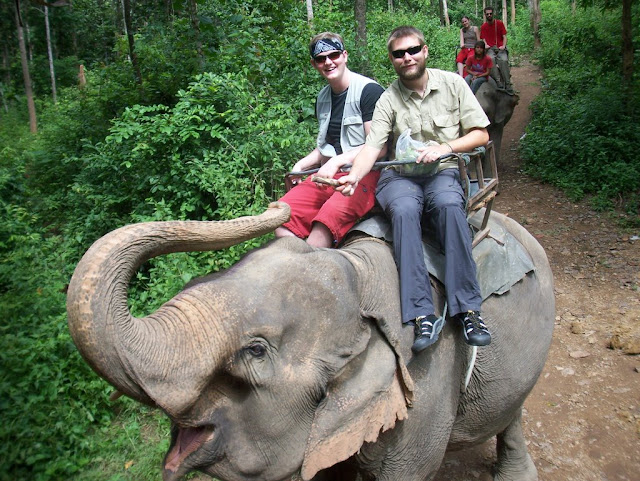 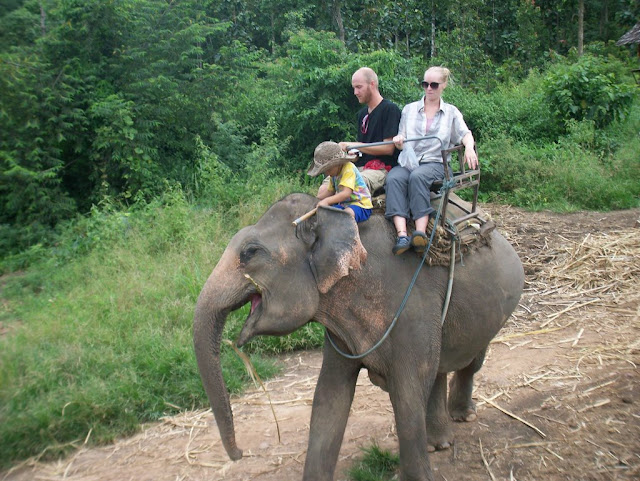 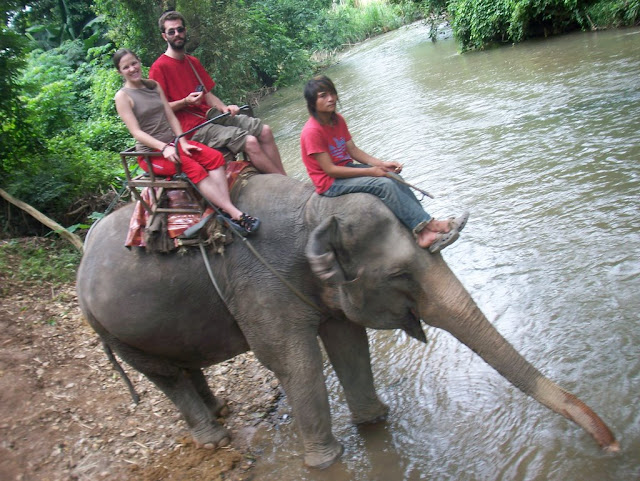 First on our busy agenda was our elephant ride, which is about the most awesome way to start a day. Elephants are spectacular, and even if you’re riding around on an established track, with vendors along the way selling bags of bananas

and sugarcane (20 Baht), its still an incredible ride. Liz & Luke had the cutest driver, a boy of no more than 4 or 5, who nonetheless drove the elephant with sufficient skill. The elephants have become a bit

greedy – helps sell more fruit – but how can you refuse a trunk curling up needfully in your face? With plenty of photos taken, our next stop was our the Karen village, which was empty except for pigs, chickens, a spicy chili pepper plant, and one woman selling beautiful traditional woven handicrafts. We might have bought a few, its true…

From there we did a bit of jungle walking, it was impossible to call 30 minutes on a wide path ‘trekking,’ but we ended up at a very nice waterfall, where we got to go swimming for a while. The water felt great in contrast to the hot, humid air, so even our guide took a dip. The swimming hole was located right at the waterfall’s base, so when we would jump in the current would immediately push us downstream – not much swimming was actually required. 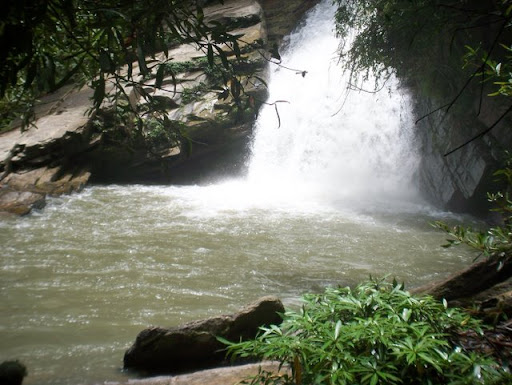 Our next village stop, the Hmong people, was even more touristed-out, as all we saw was a row of houses next to a row of handicrafts for sale. Thankfully lunch was next, as our stomach’s were in need of sustenance. The food was actually quite delicious, always a concern on any type of package tour, but we got a decent Massaman curry, plenty of fresh veggies with fried rice, and a variety of cold beverages were available as well. The grand finale was bamboo-rafting, which ended up being pretty awesome as the river we were on at least had some semblance of rapids, and the raft drivers were more than willing to make it a good time, engaging in water and fruit fights. Yep, we were picking up fruit from the river and throwing it at each other!
Saturday night we split up, LLC going out earlier, while ABB relaxed for a while before journeying out to find food and beers around midnight. LLC perhaps lucked out, getting to watch a real elephant dance around outside the bars, keeping beat surprising well, and making some new friends who gave them a motorbike ride to Spicy, one of the biggest clubs in town for late-night dancing. ABB ended up eating tasty fried mystery meat and an equally mysterious-but-tasty fruit and vegetable dish. At least the Beer Changs were without a veil of secrecy!
Sunday we had a different animal experience, as we all piled into a songthaew in the later afternoon to go to Tiger Kingdom. Basically its a place where you pay money to be able to touch real tigers – there’s a perhaps more famous Tiger Temple outside of Bangkok, however this place, only 15 minutes (versus 3 hours) away, was much more convenient, and actually turned out to be less expensive, too. Liz and Brian chose the 520 Baht “Smallest” option, while the rest of us picked “Medium” for 200 fewer Baht. So that’s $10 or $16 to spend 15 minutes with real, live tigers. Yeah, we know – it was a great deal. We got to pet and pose away, the tigers were definitely awake and not drugged, they were just relaxing as the heat of the day ended. Frankly, if the tiger’s were any more excited, it might have been a bit scary. Looking into their eyes (briefly), we knew they were happy yet still wild. After our time was up, we then got to watch an employee play with a group of five juvenile tigers, who were more than happy to chase after a toy on a stick, wrestling with each other the whole time. They’d jump into a big pool of water, pull on each other’s necks and tails, and do a multitude of other cute things. Getting to watch tigers at play from so close (10 feet, just separated by a chain-link fence) was arguably cooler than actually touching the tigers – a cat feels like a cat no matter how big it is. 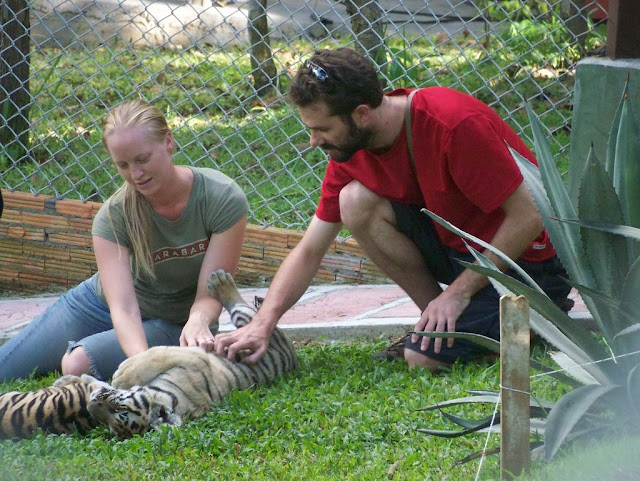 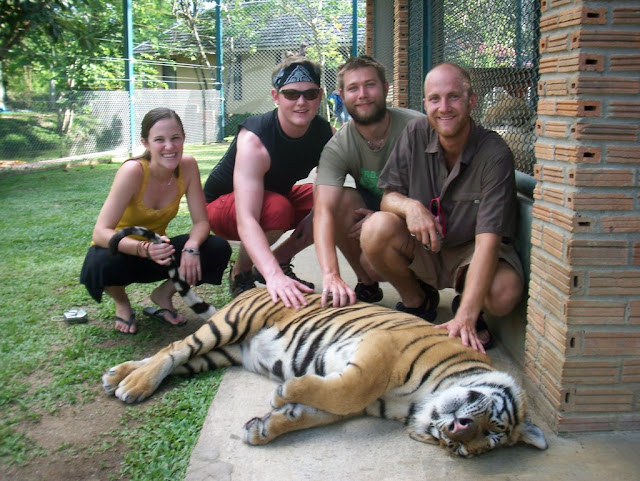 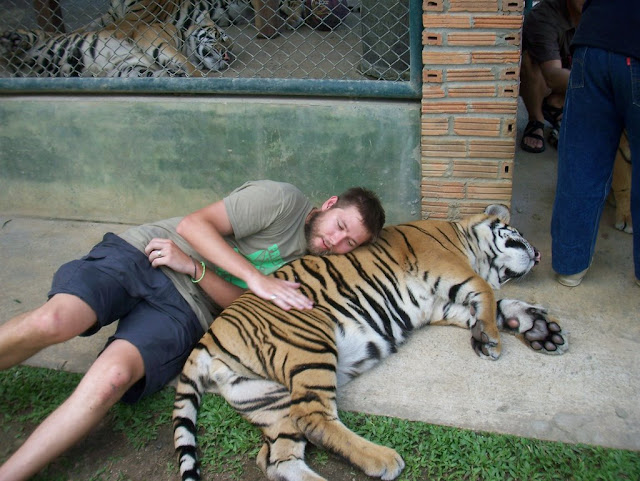 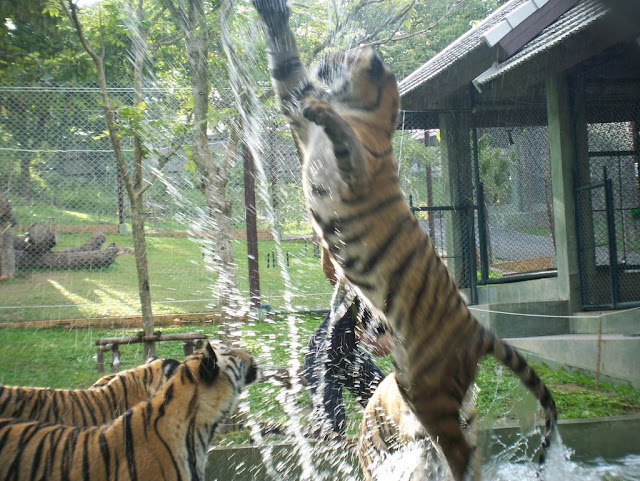 Last night was then spent wandering about, and we ended up having a chance midnight meet-up (of our different wandering groups) at a fried insect stand outside the local gay bars. The infamous ABB combo was bold enough to try grasshoppers and frogs, with Blaise even downing a cricket. They were all without doubt nasty, however the fact that enormous roaches and other ‘tree bugs’ were also available meant we were actually being pretty tame. It’s not like we’re on ‘Man Vs. Wild’ or anything over here – our lunch today at Subway (daily special 6″ sandwich = 59 Baht) was very satisfying! The gay bars were understandably lowkey on a Sunday night, though the pulsating electronic dance music and the lady-boy bartender made for quite the atmosphere. We were surprised to hear some of our own favorite songs, ‘Dhoom Utchali’ from India, as well as ‘Tell Me’ & ‘Nobody’ from Korea, blasting on the stereo – though the bar-staff swore they were Thai in origin. A song’s still a song even if the name’s wrong…
Today’s been a day of relaxation, though Luke & Christine are currently at the Chiang Mai zoo, and we remaining boys made a ticket run to the train station, but we’ve mostly been reading, writing, and packing for our 9pm overnight train back to Bangkok. Unfortunately sleeper class wasn’t available this time around, so we’re just going to have to stay up most of the night – good thing we’re oh so flexible! Tuesday will be spent doing final biking preparation, and then Brian will fly out Wednesday afternoon, so hopefully we can get a decent night of sleep Wednesday before our planned departure early Thursday morning. We want to leave early to beat both the heat and the traffic, almost half of our first day will be escaping metro-Bangkok – wish us luck on that, please!
For a different perspective on our travels, make sure to check out Blaise’s blog: Keep On Keepin’ On. It’s been added to our link list for easy accessibility, just make sure to be ready to laugh while you read, since his writing is definitely quite hilarious!
There is also a new Holiday Fu article up, called 24 Hours in Bangkok, while a Chiang Mai/Muay Thai piece is also in production. To give fair warning, these articles are definitely much more gritty and ‘real’ than this blog, if you want to keep viewing our adventures through Disney-glasses, then you should probably stick to the blog only :-).