Ko Samet, Our Beloved Mama Dog, Waiting in the Rain… 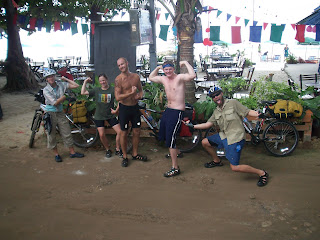 This was written yesterday (Tuesday) morning, but a further update will appear very soon, we promise!
It’s just been a touch difficult to find functioning internet over the past few days, but that’s what happens when you’re out in the Thai/Khmer boonies. But all is well, have no fear, other than tired legs and a bit more that you’ll have to read about below, all is going fantastically.

We’re currently beneath a yellow rain shelter, approximately 7 (or 8) km from the Cambodian border. Internet access isn’t exactly available here, so the actual posting shall occur later, but given that the rain doesn’t look like it’s going to let up anytime soon, typing seems like a good way to pass some time. 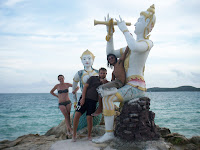 If you’re at all familiar with Thai geography, you’re realizing that we’re nowhere Ko Samet, and that’s definitely true. We were delayed from departing the island first by our love of sand and sea, and then second by Blaise’s recent illness of the liquid-out-both-ends variety. Thankfully he’s being quite the trooper, despite our rather brutal cycling schedule over the past two days.
We (finally) left Ko Samet mid-morning on Sunday, hearts heavy as our adopted dog, Mama â€“ ‘ma’ conveniently means ‘dog’ in Thai, so when we called her ‘Mama dog’ we were sorta calling her ‘dog dog dog’ â€“ 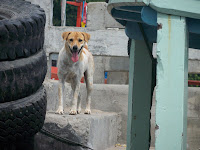 stood by the pier and watched our ferry depart. Unlike our arrival, our departure was smooth sailing as the waters were very calm. After breakfast in Ban Phae, and the acquisition of a reasonably cheap used Lonely Planet Cambodia, we then headed due east on the beach road, opting for better scenery and fewer cars for as long as we could. We eventually rejoined Highway 3 (Sukhumvit Road, still) in the town of Klaeng, but since it was only mid-afternoon we decided to soldier on for at least a few dozen more kilometers. As darkness began approaching, and no hotels were on the horizon, we stopped at a random gas station to inquire about a hotel.
Between our gestures for sleep, the word hotel, and some broken Thai phrases that Yan had written down for us the week before, we eventually made our request clear, but when the lengthy Thai explanation failed to be understood, a kindly woman on a scooter agreed to escort us to our lodging. A half kilo up was an intersection, called Na Yai Am, and then a further kilo off of the main road, essentially completely out in the countryside, was a nice modern (for Thailand) hotel, with A/C and a fridge, for 400 Baht/night. It was exactly what we needed, and without the woman’s help we would never have found it. We imagine her directions, that we failed to comprehend, went something like this: go straight until you see a 7-11; at the next intersection turn left, then go straight for at least a kilometer; then turn right at the enormous poster of the King, go straight on that road until you see the panda bear statues and it’s on the right. Duh.
Anyways, after showering everyone but Blaise (lounging in internal agony) went out to the night market for dinner â€“ but only after the amazing lightning performance had pretty much concluded, and several bouts of rain had been waited out. Dinner was great, the cheapest food we’ve had yet, and quality was not sacrificed for price. Coming from a well-touristed island, 15 Baht pad thai was literally Â¼ the price we had been paying! One beer was all we could handle with dinner, something about sweating out liters of liquid makes barley and hops a bit less appealing.
A decent night of sleep ensued, and the next morning came all too soon, but at least we’d bought breakfast provisions the night before (all hail the mighty 7-11) so we had pastries and coffee in addition to our usual Lara Bars. That’s right Stacy, we really eat Lara Bars for breakfast :-). And they are delicious!
Little did we know that our most brutal day yet was beginning, for it felt quite low-key and easy cruising through the Thai lowlands on flat well-paved roads. We skirted around Chanthaburi, opting to keep a more direct route to head into the mountains rather than seeing an unnecessary city. To our female members’ dismay we later learned C-Town is arguably one of the diamond capitols of the world, supposedly one-third of all the world’s shiny see-through gems pass through the town en route to all the globe’s jewelry stores. 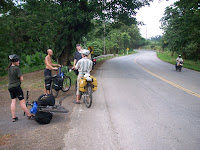 Turning north on Highway 317, the countryside immediately changed, as cool, lush, and cloudy hills were visible on all sides of the still flat road. Pushing onwards, we set our goal for Khamen, a town we eventually realized was imaginary. On the map, but not on the road. To seek solace we checked out a beekeeping site, part of Thailand’s apparently growing Agro-Tourism industry. 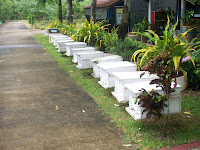 The beehives themselves were perhaps not the most exciting, but the lotions, shampoos, and lip balms made from honey â€“ and priced for local Thais and not foreign tourists â€“ were spectacular. We got to sample the two varieties of honey, as well as the uber-pricey and uber-healthy yet uber-nasty Royal Jelly.
Then the hills began. And they were rough.
Having already biked around 75km, the last ten proved excruciating and sweat-soaked. 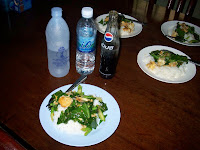 The climate was at least cool (we’d waited out the now-daily monsoon at our lunchtime eatery: rice, egg, and spinach never tasted as good), though the incline was nasty. And lengthy. But we’re hardcore, apparently (!), and we had no choice but to continue up the mountain to Pong Nam Ron, the last Thai town before the border at Ban Pakkard / Psar Phrom. Arriving energy-less, the 7-11 was a welcome and familiar neon glow. And then a miracle occurred â€“ we met, in the rural mountains, the one local foreigner (from the UK) and his kindly Thai wife. We got helpful directions for the town’s two hotel options â€“ we opted for the cheaper bungalows, the satin sheets were a nice touch â€“ and then ended up having a great dinner with them at a local restaurant where people go to ‘eat street.’ The food was super spicy, so much that the smoke from other people’s food literally choked us. But it was also super tasty, so the trade-off was worth it.
He regaled us with stories of enormous spitting cobras, his dog that was stolen by Cambodian fruit pickers to eat for dinner, and the general joys and pains of running an almost self-sufficient fruit farm in Thailand. It was a quite enjoyable dinner for everyone, since he usually doesn’t get to speak much English, and we were pleased to have some company so far off the beaten track.
Whoa, we just saw a car accident as I’m typing this. Car on truck, but both people are full of smiles as they sort it out. The damage seems minimal, though the car’s grille is currently unattached, and the truck definitely has a huge dent in its side, but apparently all is well today in Thailand. Must be the rain chilling everyone out!

That’s what was typed previously, there will be another post soon to get you all caught up â€“ we’ve definitely covered a lot of ground, albeit bumpy ground, over the past 2 days, but you’ll have to be patient to learn exactly where we are in the Kingdom of Cambodia!

One Response to Ko Samet, Our Beloved Mama Dog, Waiting in the Rain…