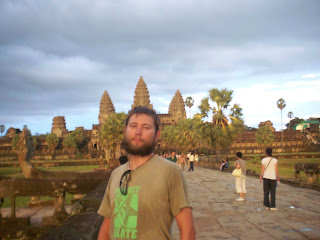 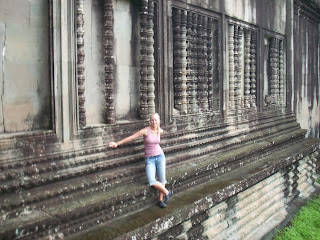 We have entered the wild world of Angkorian temples, and thus far we are very glad to have the bicycles at our disposal. They’ve made getting to and from the temples quite simple, and besides the $60 week-long pass, quite cheap. Otherwise we’d be paying tuk-tuk or van drivers $20 or $30 per day to haul us around, but instead we can stay sweat-free so long as we are moving rapidly through the humid air. We are definitely undertaking our Angkorian odyssey slowly, we very intentionally got the seven day punch-card (rather than the continuous week pass), so that we could take things at our own pace. Today has been spent resting, recovering from Christine’s birthday yesterday, and avoiding temple burnout. Seeing amazing sights doesn’t matter so much if you are too frazzled to appreciate them!
We’ve spent three days at the temples, working our way from some lesser known and older temples up to Angkor Wat itself for the birthday celebration. Sunset there was simply an amazing experience, such that we hardly even cared that some street kid stole Liz’s watch off of her bicycle!
Siem Reap, the town from which everyone accesses Angkor, is located 6km south of the ancient monument itself. For our first day, after buying our official tickets from the well-organized ticket booth, we headed due east of Siem Reap to a temple group called Roluous, that was actually built several hundred years before most of Angkor. 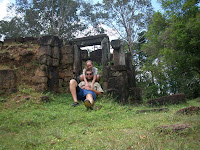 As you can see, it was a pretty relaxing spot, once we managed to ignore the horde of attacking beverage saleswomen. As with many of the temples we have seen, the Roluos Group was in differing states of ruin and repair, as almost everywhere is undergoing some sort of conservation. 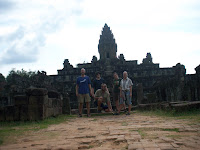 Here we are (a bit blurrily) in front of a temple called Bakong. After a leisurely evening ride through the surrounding paddy fields, the obligatory “hello” of course being quite common, we ended our first day of temple glory. 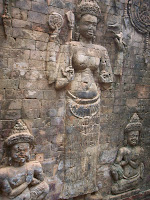 Our next day involved much more cycling, 47km instead of the previous days’ 32km, but also included several spectacular temples, ending with a great sunset at Phnom Bok. Along the way we cruised around Angkor Wat’s massive moat (but avoided seeing it, in an attempt to save “the best for later” – we made it one more day), before stopping at several temples within the main cluster. There are temples literally all over the place, and our plan was to ride a ways out into the countryside, but we couldn’t just ride past fascinating ruins without stopping at them!
So we stopped and saw:
Prasat Kravan – a few small chambers with some nice carvings, like the woman shown above. 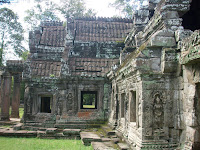 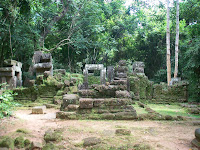 Banteay Kdel – a seemingly endless series of hallways, with plenty of disrepair within its massively long complex, though the small serene pile of moss-covered remnants at the entrance were equally photogenic.

Sras Srang – now just a giant water tank, with only the temple’s platform remaining, we relaxed here for a while to enjoy some peace and quiet.

Pre Rup – a large, climbable set of ruins, with plenty of towers of all sizes, and great jungle views to the north.
Banteay Samre – another large complex, with very intact walls and a proper entrance gate.

Phnom Bok – accessible by a serious stair climb, these ruins are well-renowned for the pair of trees growing out of the tops of two dilapidated buildings.

We rode back in the dark, no big deal on the smooth roads somewhat lit by our headlamps, but all the traffic drives slowly around here since there are plenty of other local cyclists that need to be watched out for. We were definitely exhausted from our long day – getting up the next morning was far from a priority – but we wanted to do something spectacular for Christine’s birthday, and sunset at Angkor Wat certainly did not disappoint!
A photo collage is most certainly in order, and it will make an appearance soon, we promise!