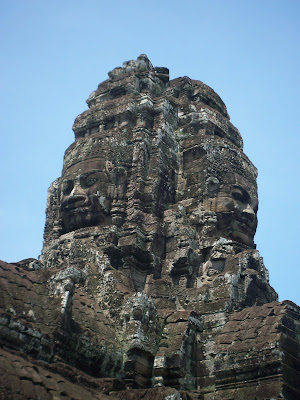 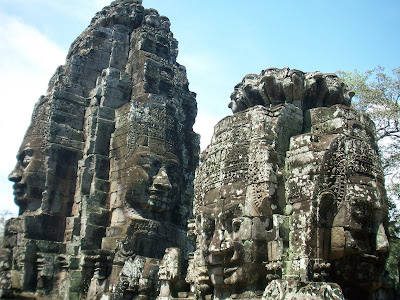 We are taking one final relaxation day, in order to avoid temple overload, before our last two days of temple exploration. Our seven-day punch-card is nearing its end, sadly, but given that our time in Cambodia is almost half finished, we need to get a move on to go and see the rest of this amazing country. Tomorrow will be an early morning, with a sunrise at Angkor Wat preceding a full day of adventure by van, in order to see some outer-lying places. Banteay Srei, Kbal Spean, and the mighty Beng Mealea are hopefully going to blow our minds with their respective finest carvings, 1000 river lingas, and jungle overgrowth. We’ll give you the well-splattered report once we’ve written it.
Since the last blog post, we’ve spent two more tiring but great days exploring, seeing some of the most impressive temples besides Angkor Wat itself. The first day was dedicated to Angkor Thom, a massive gated city with numerous buildings still standing, including the dazzling Bayon. Known for its hundreds of carved heads, staring out protectively in all directions, it also holds some very well preserved carvings of the life of its former inhabitants. The faces were everywhere, noses or ears poking out into the blue sky behind them, making the temple’s rubble-strewn exterior easily forgotten. Like many temples Bayon is currently undergoing restoration, meaning it is as active a construction site as an archeological one, though presumably the magnitude of the location isn’t even lost on the workers.
We spent a long time at Bayon, it was too amazing not to, but the other nearby highlights of Angkor Thom – once we’d eaten a nice fried rice lunch – were also impressive:

Baphuon is also being repaired, so much so that only its lengthy walkway is really currently open, but it was still interesting to see such an enormous salvage job in progress.

The Terrace of the Elephants stretches for over 300 meters, a seemingly endless carved wall full of elephants, with statues guarding either entrance. 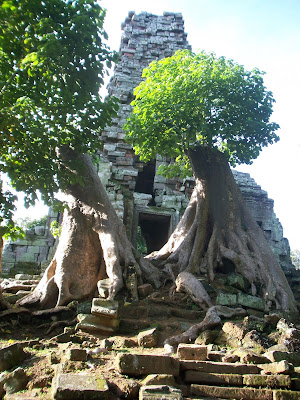 Hidden behind the main road, lies Preah Palilay, a smaller temple that is slowly being overgrown. Trees emerged from all sides of the main temple, which looked as though it were on a hill from all the surrounding flora and greenery.

We then went through another gate, not as impressive as the main southern entrance from earlier in the day, but still imposing with faces looking in every cardinal direction and statues pulling an enormous naga on either side of the road. 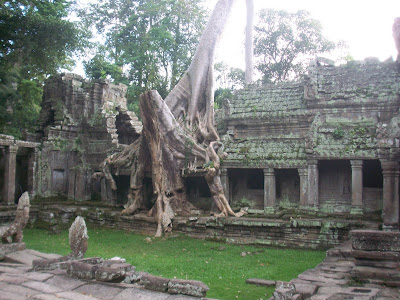 The end of the day was spent at Preah Kahn, a sprawling temple partially collapsing and overgrown, despite extensive restoration efforts. Featuring an unusual two-story building that may have once held the king’s sword, it was a peaceful ending to a tiring day. 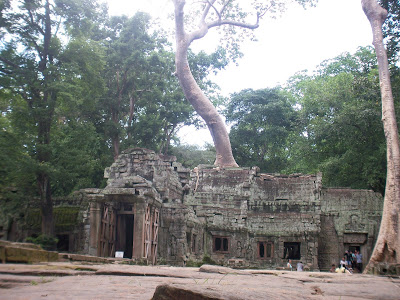 We had initially planned on tacking the infamous Ta Prohm on at the end of the day, but time flies when you are seeing temples, and as we found out it was more than worthy of its own day of exploration. Ta Prohm has always been well-known since it has been partially conceded to the jungle, but its recent popularity is primarily due to it’s featured role in the movie Tomb Raider.

To say the least, the trees were more exciting than the temple, and it was pretty intense. A massive complex, with the majority of outer walls still intact, and plenty of passages to wander about in search of carvings and great photo ops. However, tourism has taken its toll, primarily in the form of wooden walkways and roped-off sections. Those help in getting around easily, but really detract from the intended â€œwildâ€ ambiance, as does the almost constant crowd. Classic photos can still be taken, but sometimes there’s a wait for other tourists to clear out of the frame. 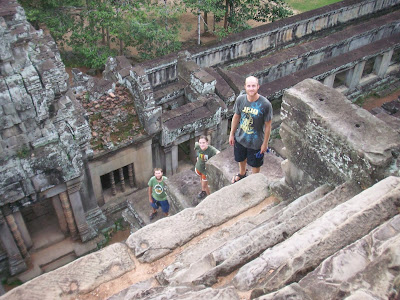 Nonetheless, the remainder of the day paled in comparison, though the heights of Ta Keo were frighteningly impressive to climb, and both Thommanon and Chau Say Tevoda were interesting despite ensuing twilight. We also squeezed in the Victory Gate, though it seemed virtually identical to the more intact (and therefore spectacular) South Gate that we’d cycled through the day before. 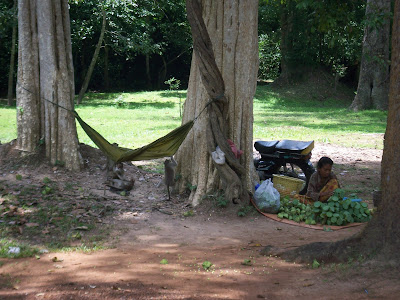 Another exciting feature of Angkor Thom, which was somehow almost forgotten is…. monkeys! Technically macaques, they are all over the grounds, especially near the primary entrance to the city. We saw them scurrying about, relaxing in trees, and playing in hammocks â€“ how cute!

Now for some other news: as you may (or may not) have noticed, there have been a lack of recent Holiday Fu articles by Anderson. Our friend Iain, who runs the website, has been laid off, and consequently Anderson’s series left in a state of limbo. That has just about resolved itself, and once things have been finalized there should be an exciting announcement. Just have to wait…

That’s the news for now, off to book our van trip for tomorrow, and then do a little shopping before dinner: the traveler’s life, ever so rough!