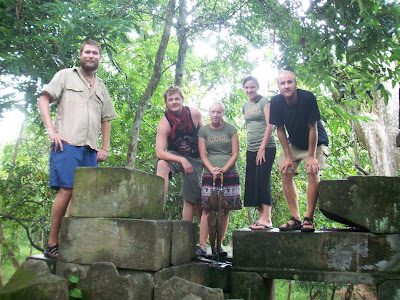 Right now we’re in the midst of a somewhat hilarious journey with our bikes, on a bus. What? Why are we not cycling but instead riding another form of transportation?
The crux of the matter is the remaining time on our visa, steadily decreasing until we must leave Cambodia on the 18th of September, and the multitude of things we’d like to do in the remaining 16 days. Cycling the almost 300km to Phnom Penh would take, even with exhausting 80+km days of riding, four full days, never-mind that in cycling such a distance there ought to be some exciting cultural stops to consume even more time. But wait, there aren’t really any exciting cultural stops along the way (National Highway 6), except for â€œyet another templeâ€ in the form of Sambor Prei Kuk? Sad but true, unless we were to ride several additional days further, to add either Koh Ker’s temples, Kratie’s river dolphins, or another full week to get to Rattanakiri’s indigenous tribes, for all our work and days spent pedaling, we would only visit one place. Now surely we’d see plenty of interesting things, and presumably meet some kindly people, but the unfortunate reality is that, especially with the time involved in cycling from the capitol to Cambodia’s south-eastern coast, we are barely going to have time to squeeze in our currently-planned agenda. Instead then, we’re taking a six-hour bus ride, with our bikes rather hilariously stuffed into their own seats in the back row. With our â€œgainâ€ of three extra days, we plan on seeing Phnom Penh, before hitting the road again. 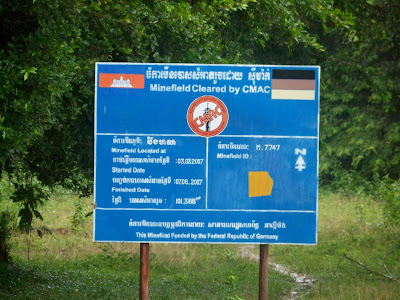 After the city we plan on visiting some national parks and beaches, probably spot more of these signs, see animals and eat sea animals, and of course cycle a few hundred kilometers on our way to Vietnam. While in Phnom Penh then, one of our primary concerns is visiting the Vietnamese consulate in order to obtain our visas, since they are currently not available at the border. That’s both good and bad; it may be a bit of a hassle to go to the consulate’s office, but on the other hand there is minimal headache at the actual border and the chance of previously-unknown â€œfeesâ€ being charged are much less likely.
Thus, we have left Siem Reap and the mighty glory of Angkor behind us, a bit sadly after eleven nights of fun in Cambodia’s tourist headquarters. We spent six days of templing, and honestly we were too templed-out to attempt day seven, though the impression the ancient buildings made on us will not soon be forgotten. Angkor Wat, Bayan, Phnom Bok, Ta Prohm, Beng Mealea, Kbal Spean, Banteay Srei, and the multitude of other Angkorian sites we saw were impressive, dazzling, and generally and absolute joy to explore, the occasional crowd of foreigners or sales-children aside.
Yet we didn’t even see a fraction of things, in one sense, since plenty of other temples lie in wait all across Cambodia, the majority of the places we did visit were simply too vast to thoroughly explore even when granted several hours of thoughtful wandering, and the research required to put ancient Khmer culture into context is no easy task.
Does that make us bad travelers, apparently failing to fully appreciate our exotic destinations? How can it, when the entire point of travel is to experience the unknown, the foreign, the confusing, the different, the frustrating, the fantastic, the uncomfortable, the insert your word here, and attempt to understand it and relate it to your own life. By bridging that gap, hopefully understanding can increase between people and cultures brought together by an interest in the world that is broader than their own daily life. If nothing else, by exploring the world, that which was once unimaginable becomes better understood, and everyone stands to benefit from that.
OK, OK, enough philosophical rants, time for awesome pictures from our final temple day. As previously mentioned we rented a van for the day, in order to see everything we wanted to, especially the isolated and overgrown temple of Beng Mealea. 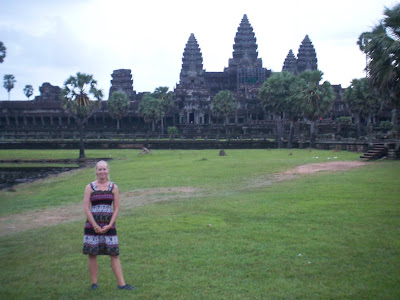 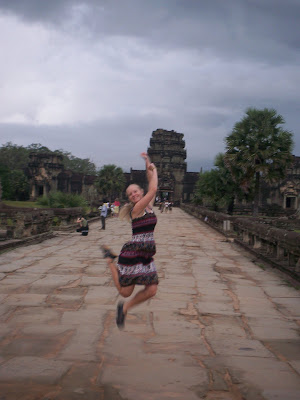 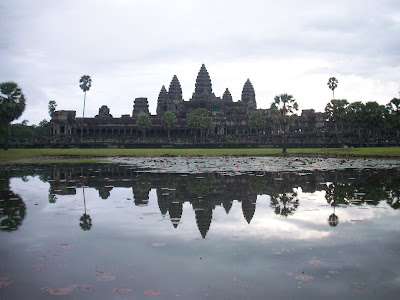 First up was sunrise at Angkor Wat, somewhat diminished by clouds and the early hour, but still fantastic in the cool and calm morning air. Then the real driving began, as we headed to Banteay Srei. 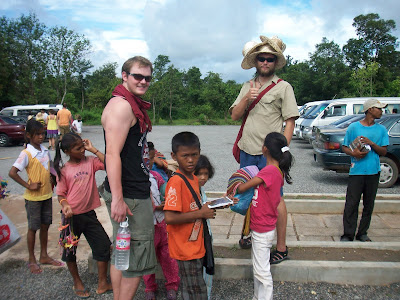 We managed to beat both the crowds (not of children selling though) and the heat, which made the small temple’s multitude of impressive carvings all that much more enjoyable. 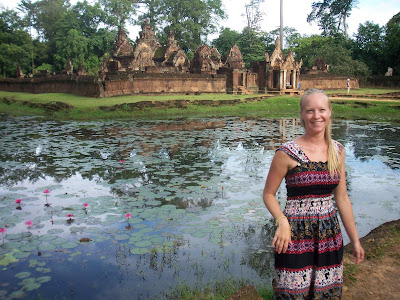 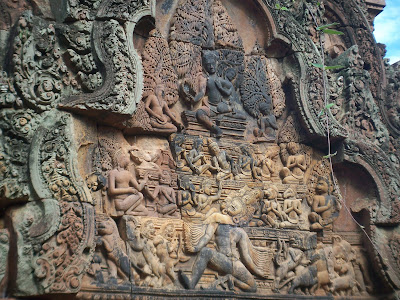 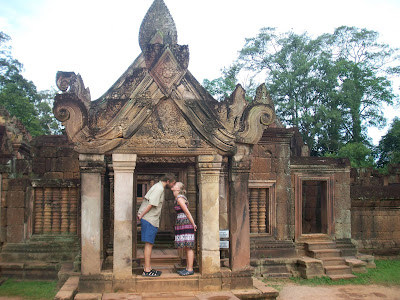 It was a romantic setting for sure, so we did the best we could! After the first of two overpriced meals, we then drove to Kbal Spean, which was the easy part. 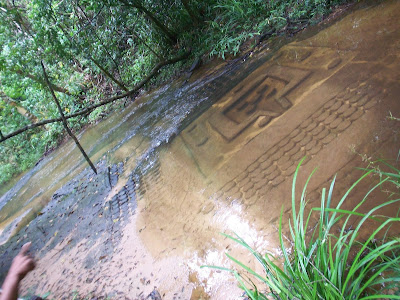 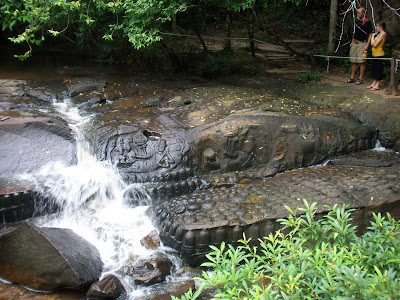 What followed was a 3km round-trip jungle hike, which was very enjoyable though hot. The carvings themselves, and the lingas as well, were impressively located directly in the river. Another round of $2 noodles (or rice) followed, conveniently at our driver’s friend’s restaurant. 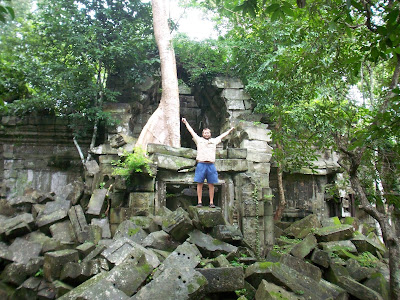 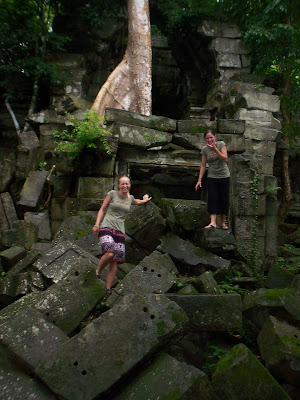 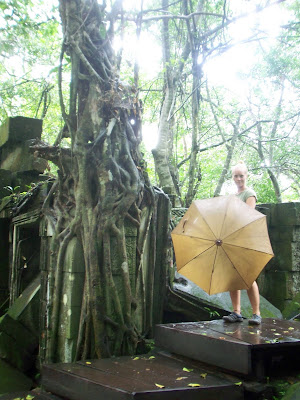 Then we began the journey out to Beng Mealea, which for our part involved a lot of dozing amidst some intense downpours, and in one section a pretty intense road. The rain was pretty much over by the time we arrived, and as we walked down the long path to the temple itself, we could already tell that it was far more ruined than anything else we’d seen. Tragically, the presence of two supposed, unwanted, and ultimately unneeded police/guides somewhat marred the experience. Yes, the temple is literally collapsing, but the paths to go around are reasonably in place, and the whole purpose of journeying out so far was to be alone in an ancient collapsing temple, not be escorted about in one. Plus there are walkways, left over from the filming of the movie Two Brothers, throughout the center of the temple, so all-and-all it still felt rather touristic, even though only a few other people were there and the place looked amazing.
Stones lay everywhere, as massive trees have uprooted entire walls, and almost every doorway is destroyed by collapse. The trees are running wild in Beng Mealea, even though they are somewhat noticeably less photogenic than their counterparts at Ta Prohm. But the general sense of isolation, coupled with the somewhat forlorn feeling of the impending jungle takeover, made the temple very atmospheric, in some sort of post-post-apocalyptic way. 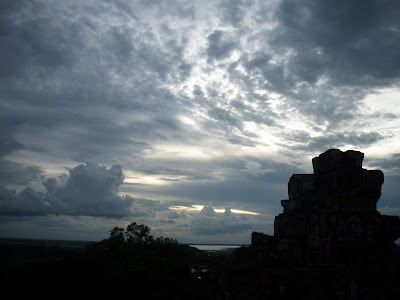 That ended up being our last real Angkor experience, as the sunset later at Phnom Bakong was pretty much a bust, much to the disappointment of the large crowd surrounding the highest point in the area. Nonetheless, from Angkor Wat on down, all the temples we were fortunate enough to visit were spectacular. If you’re reading this, you owe it to yourself to come and visit Cambodia when you can â€“ you won’t be disappointed, unless you hate abandoned old stone buildings in the relative middle of nowhere.
By now we’ve made it to a guesthouse in Phnom Penh; it’s called Green Lake, but the water is most definitely brown. We’re staying in bungalows on the water, $6/night, but don’t plan on being here for more than three or four days. Tomorrow, when this will hopefully get posted, should be a busy day full of â€¦ as yet undecided!

Just have to wait,
Peace
A&E+3