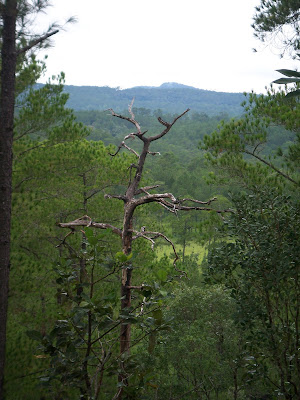 The monsoon has become more of a “monnow,” which has definitely been dictating our travel plans over the past couple of days, to the point that we have even ended up in a city we weren’t planning on visiting. While Sihanoukville does have decent beaches, and plenty of foreigner-friendly nightlife, due to its distance from the Vietnamese border, we had decided to cut it out of our travel plans and focus instead on spending time in Kampot and Kep. Kampot used to be known for its pepper, while Kep is arguably Cambodia’s seafood capitol. Plus around each is the usual array of touristic endeavors (temples, national parks, etc.), so the remaining 9 days on our visa could be spent quite easily.
However, fate and Mother Nature united to make alternate plans for us, though the downside of that is we are now getting poured on further west then we had any real desire to be. So how’d we get to a place we didn’t plan on seeing? Well, it all started from Kirirom National Park…
After leaving Kompong Speu, we began a 50+ km ride, primarily on National Highway 4. After a vegetarian lunch, served with delicious iced coffees, we then headed 11km off into the wilderness on a muddy and at times flooded dirt road. At the base of the national park we found one of the two available hotels, Kirirom Hillside Resort. We knew it would be a bit swanky by Khmer standards, but we’d read that it had tents available, which was a) more our style and b) more our price. Cycling into the massive compound, it was clear we were in some sort of nice Cambodian resort. In addition to a plethora of rooms, with prices up to $200/night, there was a swimming pool, sauna, zoo, zip-line, and all sorts of other accouterments. Of course their tents were gone for repair, and upon finding out that the next available hotel was 17km up a steep mountain, given that it was already 4pm we had to work something out. 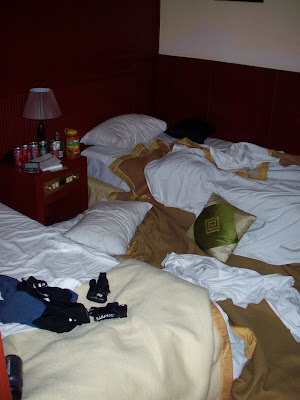 Thankfully, the General Manager was most kind and understanding of tourists on a budget, and with some negotiations we worked out quite the deal: rather than paying $50/room/night, with us needing two rooms plus an extra cot ($17), which comes out to $117 night â€“ about $100 more than we usually spend â€“ we were graciously allowed to all pack in to only one room, with the additional mattress provided for free. And they dropped the price to $40, all five of us got the included breakfast, and we could use all the facilities as much as we wanted. 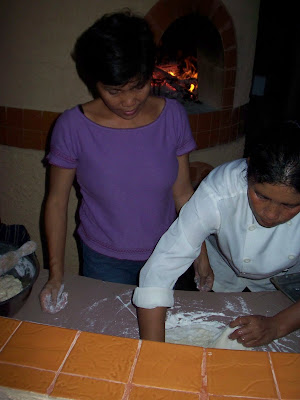 So for $8/person, we got to stay in deluxe but cramped accommodations, eat fantastic food (especially the wood-oven pizzas), drink $2 beers poolside, and enjoy a relaxing sauna in the evenings! Probably going to the best deal on lodging we’ll ever find on this trip, so at least we got to enjoy it for two nights.
During the day, we rode up the intimidating mountain that makes up Kirirom, which meant we literally pedaled uphill for about four straight hours. The winds that were often against on the main highway were at least not a factor, but the rain oozing out of the heavy clouds certainly kept us chilly and focused. 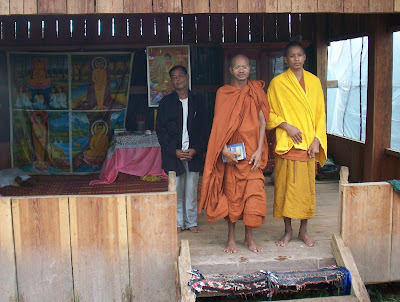 But, without our heavy packs the ride really wasn’t too bad, we found drinks at the top, and even got to talk with a friendly monk at one of the hilltop pagodas. We also found the other hotel, and at $20/room/night it was a grimy, moldy rip-off. 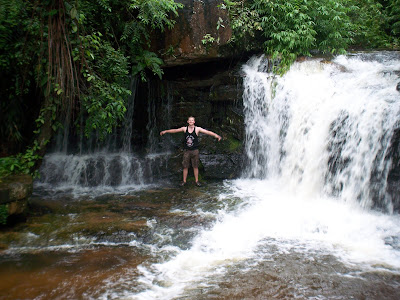 The park does offer trekking, however due to the rain and the length of our ride we opted to skip them, but we did find our way to a pretty decent waterfall where we were able to relax in solitude. 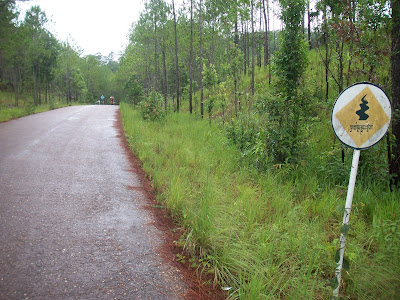 Afterward, as evening began to approach, we headed down the mountain â€“ which ended up being absolutely fantastic. We certainly hit our top speed ever, flying downwards so fast that it caused our brakes to sizzle. All our hard work getting up was repaid by the scant 30 minutes it took us to return home, as the agonizing ascent turned into quite a joyride, and to top it off we were able to head directly to the waiting pool! 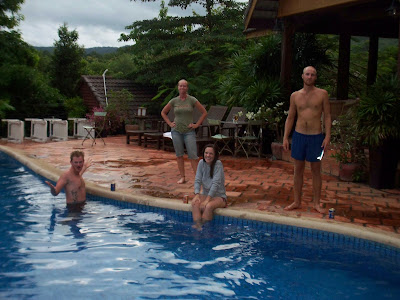 By total random chance a cycling tour group, foreigners traveling for one week in a somewhat pampered, if not completely pampered, fashion, were also descending the mountain when we were. Whether they actually rode up the mountain, or if their transport cars and trucks dropped them off at the top, was up for debate. Some of the group were at least reasonably nice, though many seemed rather angry at having their every whim catered to, bordering on rude and disrespectful to the hotel staff. The experience certainly puts a different perspective on how you can travel, what money really gets you, and overall made us very appreciative to be traveling our pace, our style, on our terms.
That idea segues nicely into our next day, which began fantastically at our hotel, with a morning dip in the pool following breakfast, a jaunt through the zoo to see the monkeys again, and then our complimentary zip-line ride. Except for Anderson and Blaise, both too big for the Khmer-sized harness, everyone had a blast cruising through the tree for a 30-second adrenaline rush. Departing at noon, with kilometers of cycling in our heads, we retraced our path out of the park area, and ate at the same restaurant we had two days before. This time the vegetarian cuisine was even more impressive, a cold salad nicely complimented the stir-fried main courses and rice.
Getting back on the road became rain-delayed, as the skies literally opened up as we ate. We waited patiently for about 30 minutes, but it soon became apparent that no end was in sight, but darkness is always approaching, a relentless enemy of the laid-back cyclist. So off we pedaled into the rain, in search of a guesthouse we’d read about on the internet, located around the 90km-signpost. Of course the guesthouse proved to be a phantom, and as the weather got worse no alternative presented themselves, until we finally sought shelter at a petrol station to try and sort things out. The facts became readily apparent: no guesthouses anywhere, perhaps a temple we could stay in, and not very much English could be spoken. We looked into getting a ride to a place to stay, but everyone said either Phnom Penh or Sihanoukville. Problem being, of course, we were coming from the former and had no desire to go to the latter, since it overshot our planned destination (after another day of riding) of Kampot by a good day of cycling. So, faced with waiting forever for the rain to cease, attempting to sleep while soaked at the temple, or heading to Sihanoukville, we picked the scruffy beach-town.
Liz managed to chase down a passing mini-bus, the main method of transportation in a country that has just been getting reliably paved roads over the past five years, and for only $25 total, the five of us and our bikes could ride the 125km. When the journey gets ridiculous, the wise traveler has to reconsider the options and make the best choice, even if is far from the original plan.
So here we are in S-town, near a garbage-strewn beach, where it is still raining much of the time, making it hard for our clothes to dry amongst other things. Today we’re relaxing, getting some much-needed internet time in, and attempting to reconsider our remaining Cambodia schedule, but we will most likely be departing somewhat early tomorrow to get a move-on back east. We shall see, we shall see… 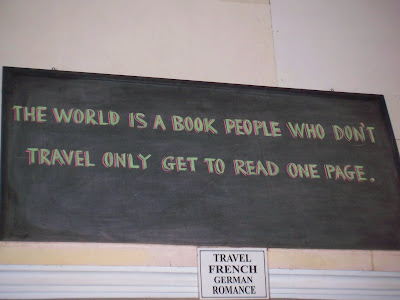