From Sihanoukville to Kampot 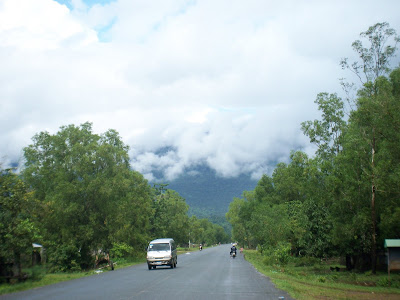 Most surprisingly, the monsoon actually cooperated with us, enabling us to leave Sihanoukville as planned early on Friday. We had a somewhat hilarious breakfast at a restaurant owned by an absent-minded and cantankerous French-Canadian, before departing in a cool breeze for a long day of cycling. The first 15km out of S-town were hilly, but our fresh legs and morning enthusiasm enabled us to conquer them with relative ease. We kept up a good pace, managing to arrive in Veal Renh for lunch just before the rain. For ten minutes a flood emerged from the sky, and then that was it â€“ the day of monsoon (for us at least) was finished!
After lunch, once we’d switched from NH 4 to NH 3, we did see some rain in the distance, but it managed to outrun us, despite our best efforts to catch up to it and get soaked. 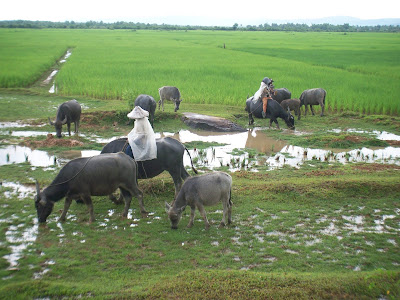 Riding through endless paddy fields was interesting, we saw boys on buffaloes and all too many dead snakes, but the lush cloud-filled hills looming over all the other scenery were definitely the most interesting. 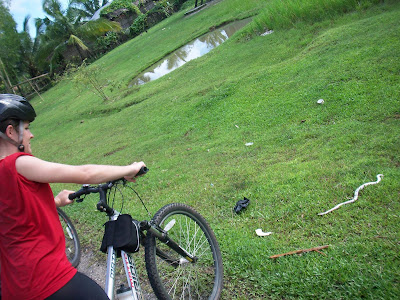 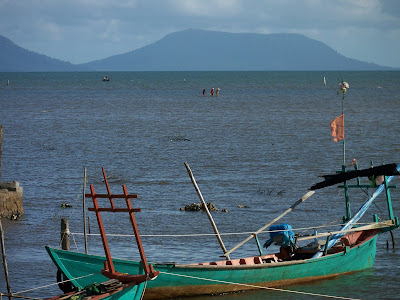 Soon enough rice turned to water, as the mangrove-filled coastline appeared. Plenty of boats, out catching seafood, were visible from the road, and at times we saw mixed piles of crabs and shrimp laying out to dry.

We finally got to Kampot before sunrise, so our jaunt through town to find a hotel was blessed with a fantastic pink sky, as it appears every night here is. We looked at several sleeping options, but finally decided on a cheapie by the river, only $5/room, with a restaurant right on the water, and 4-foot-high flood marks on all the walls. The entire town apparently flooded earlier in the week, a dam up-river was opened up and a deluge of water followed. So things smell a bit of mildew, but we like the location and plan on leaving town tomorrow anyways.
The reality is there’s not much to do in Kampot itself, other than the proverbial chillaxing, though there are several activities available outside the town. We’ve actually chosen to skip the main attraction, Bokor National Park, because the road is entirely closed, so we cannot cycle up it like we had planned on. We could’ve taken a pricey ($20 each) group tour, starting with hiking and then riding up the 2nd part of the mountain in a truck, but that’s just not our style. Plus, after seeing the photos of the abandoned French hotel at the top (the main reason for going), we were a bit unimpressed to say the least. Maybe next time, when we can explore it on our own terms, but we don’t feel like we’re missing out on much. Blaise, Christine, & Luke did decide to book an alternate tour, a cycling/hiking trip to a nearby waterfall, but we Muths opted out in order to relax, read, write, and get a blind-massage. All over Cambodia there are blind massage parlors, we’ve just been putting it off until now, but Kampot is our last chance, and as verified yesterday by Luke & Christine, it’s certainly an experience not to be missed.
Tomorrow then, the plan is to leisurely cycle the 25km to Kep, Cambodia’s unofficial seafood capitol, and on the way visit one of Kampot’s famed pepper fields and an ancient 7th century Funan cave temple. Just another day :-).
Right now we’re relaxing in Blissful Guesthouse’s restaurant, taking advantage of their $2 all-day internet. Safe to say we’ve been chilling here for a while, after enjoying some scrumptious food: a burrito and a salad ($4 each). Cambodia’s food prices might not be as cheap as India’s, but the diversity of dishes that is available more than makes up for the slightly steeper price tag.

Keep on keepin’ on wherever you are,
Peace
A&E+3

Here’s your moment of zen, our bikes getting loaded up last week into a shared van-taxi during the rain somewhere outside of Kirirom Nat’l Park: 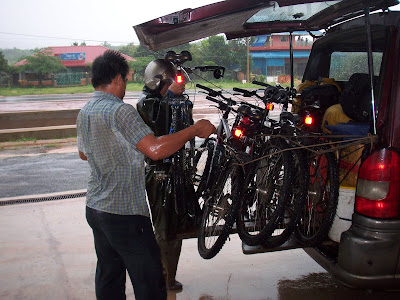