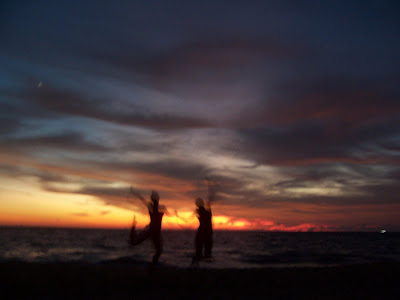 Or, perhaps more accurately, we’ve arrived in Vietnam â€“ it’s been here for a good while, after all. As indicated by the sidebar, it has yet to completely â€œwowâ€ us, although yesterday was a very enjoyable day. But chronology, that cursed literary beast, must be obeyed, so let’s rewind back to our Cambodian departure:
We left Kep rather late, partially due to our activities the night before, partially due to Luke unexpectedly feeling ill, and undoubtedly partially because we didn’t really want to go. There’s something magical about Cambodia; maybe its the rugged rawness, or the endless amazing places, though surely the delightful people and delicious food are also quite key. Whatever it may be, we miss it already, and urge you to go experience it for yourself, before the country changes even more than it already has. The government is literally selling the land away to foreign investors for development, so waiting a mere five years may make all the difference.
As for Vietnam, the road getting there alone was quite hellacious. 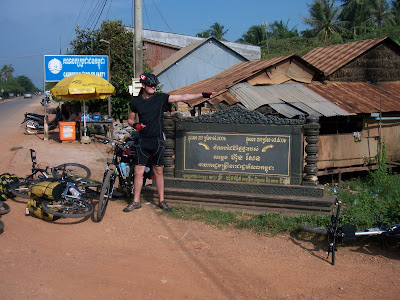 From Kep to Kampong Trach was paved and reasonable, but as we turned south towards the border (and then Ha Tien on the Vietnamese side), the disaster began. At times the road was merely full of enormous potholes, the type that slow even a bicycle down to a wobbly crawl, but more often than not what was supposed to be red-dirt road was actually a muddy sea. 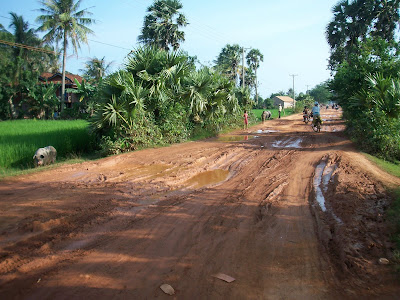 With plenty of other traffic coming from both directions, avoiding the muck proved impossible, and as the 20km slowly passed by we only got dirtier and dirtier. By the time we finally reached the border, our bikes were virtually completely covered in mud, our packs were too, and we riders were filthy, especially our shoes. 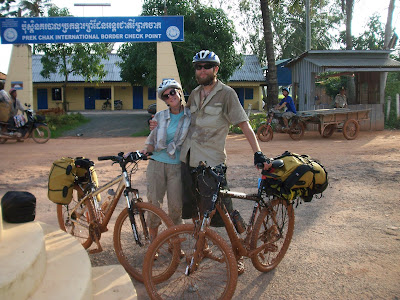 The Cambodian border police were definitely amused, but after we were officially checked out they nicely showed us a water tank where we could clean ourselves off a bit. Only ‘a bit’ because without a pressure-washer cleanliness was only a fantasy, but at least our shoes were a color besides brown, and our brake-pads were able to make somewhat proper contact with our wheels once again. 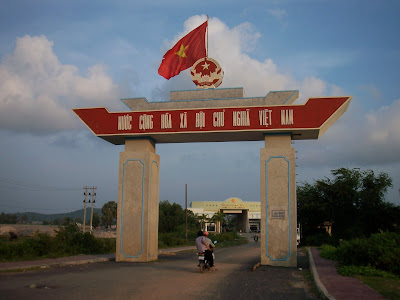 Getting into Vietnam, despite having already obtained our visas, proved more time-consuming since the guard was initially off grocery shopping, and then we had to wait even longer as socialist bureaucracy apparently demanded a very lengthy check-in process. 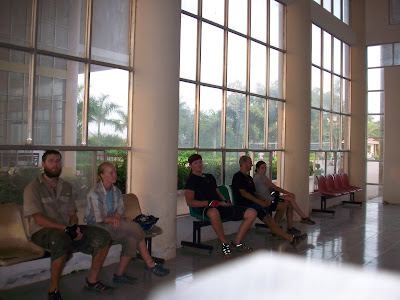 At least there was a military volleyball game happening right across the road, so between that and our exhaustion we didn’t mind sitting around for a while.
Our approach to Ha Tien, about 8km from the border, quickly became shrouded in darkness, but thankfully the road to the center of town was easy to find. After checking out a few hotels, we found a good deal, along with a friendly, helpful, and English-speaking owner. One big room, with three huge beds, cost 300,000 Dong, about $18. The initial change of currency is always confusing, and it doesn’t help when the exchange rate is hard to calculate: about 18,000 Dong â€“ yes, that’s really what Vietnamese money is called â€“ is $1, though since we get most of our money from ATMs we are never quite sure of the exact rate. The owner recommended a tasty nearby restaurant, where we were able to tiredly celebrate our 5th wedding anniversary, still muddy since food decisively took precedence over showering. 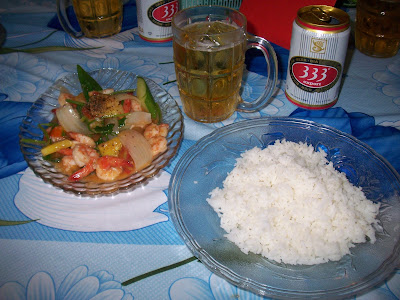 One beer and a few toasts was all we could manage, but that’s how life goes sometimes. At least all of our anniversaries have been more than exciting:

1st â€“ Iowa City, IA, USA (saw a Shakespearean play)
2nd â€“ Hamburg, Germany (partied it up on the Reeperbahn)
3rd â€“ Kathmandu, Nepal (relaxing with our cousin Reannon)
4th â€“ Busan, Korea (oddly enough, this is the one we can’t quite remember)
5th â€“ you have been reading this whole thing, right?

Anyways, after dinner we managed a brief walk about, during which we found some snacks and stumbled upon a crazy â€œadventure-landâ€ for children, the highlight of which was a tiny skating rink, packed with talented youngsters doing all sorts of impressive moves. Made our previously exciting peanuts and chips seem rather tame. Showers and then bed ensued, an early boat-ride to Phu Quoc awaited us.
The boat ride, â€œlocalâ€ because the high-speed boat was undergoing repairs, was affordable at $9/person (including bikes), and thanks to Liz’s early morning initiative we not only got the last seats, but also managed to get our bikes cleaned to avoid being â€œthose dirty foreignersâ€ anymore than we already are. 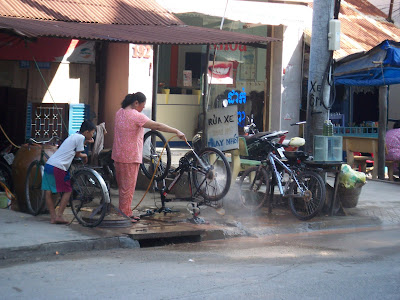 Our bicycles were thrown on the roof of the deck, along with all sorts of other miscellaneous cargo, while we sat below on the uncomfortable benches with the twenty or so other passengers.

We later learned that most whities just fly into Phu Quoc, but at the time we were a bit surprised to be the only foreigners on the boat. The promised 4+ hour journey proved delightfully short at only 2.5 hours, though we then spent that remaining 90 minutes cycling across the island, in the mid-day heat, to get to our destination: Long Beach.
Yes, we’d already been to Long Beach (California) the day we left the States, but here on Phu Quoc the beach is much longer and very relaxed. At least right now in the off-season, when it borders on dead. For sure, there are a decent number of people around at all times, but in general things are quite empty. Based on the advice of a Vietnamese man on the side of the road, who later turned out to be a rather infamous Phu Quoc character named Tony â€“ who operates a snorkeling company amongst other ventures (what a foreshadowing… 🙂 â€“ we sought out a resort called Tropicana in the middle of Long Beach’s hotel row. For $50/night total, we got a private family bungalow, complimentary breakfast, free wifi, as well as easy beach access and a 24-hour pool. Not as cheap as we usually roll, but in this case the amenities have well been worth the additional expense.
Truth be told, our love of the resort has been on a steady decrease since we arrived, something about rats in the room eating food left out, shoddy breakfasts and the food in general being pricey, plus the friendly cleaning staff waking us on several occasions all adding up to be a bit frustrating, though we are still happy to be here! The staff is nice and helpful, the pool is clean and warm, and the far-from-straight pool table is at least fun enough to play. When you’re traveling, the bad comes with the good whether you want it to or not…
As for Phu Quoc, there’s not much to do but relax, in the sun when it’s around, or like today in the shade. So we’ve been reading a decent amount, and now that the moon is waxing, we’ve finally been able to do some great bodysurfing â€“ it was so fun last night that it was the main motivator for us staying for another night. But we’ve bought boat tickets to Rach Gia for tomorrow morning, so we are definitely leaving in about 20 hours… what a sad countdown. Phu Quoc also has a great night market, with plenty of tasty and cheap food, plus an amazing smoothie stand, as well as some Western-style desserts that really hit the spot after barbequed shrimp, scallops, or boar â€“ lots of variety on the grill here.
Yesterday was surely an island highlight, as we took an all-day snorkeling trip with Tony’s Travel. His son, who has decided to choose the hilarious English name â€œChicken,â€ was our guide for the expedition. 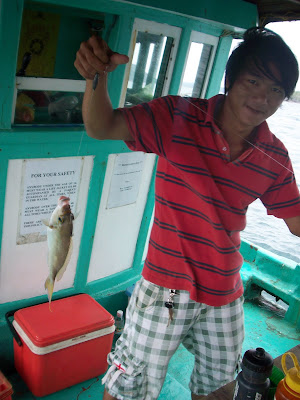 First up was a local pearl farm, which was interesting enough though most of the prices, especially when compared to the night market, were frighteningly high. But quality has a cost, even in Vietnam. After that we made our way to the dock, boarded our boat, and took off to the first of two snorkeling spots. 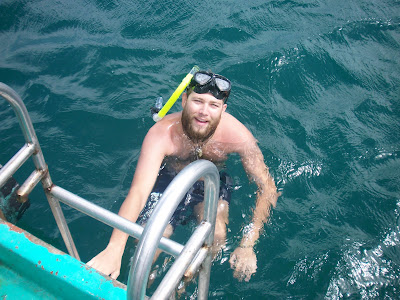 At first the water was murky, but as we swam away from the boats and closer to the rocks, a plethora of fish and coral emerged. 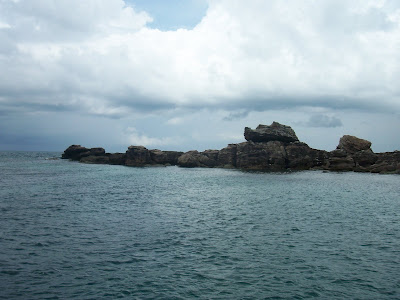 If only we had an underwater camera this part of the post would surely be much more interesting, but the undersea life was numerous and exotic. The first spot we snorkeled, Phu Bo, depressingly had too much bleached and dead coral, although the fish were still in abundance. The second spot, Shadow Island, seemed to have a healthier ecosystem, as the coral was so large and plentiful that seeing fish was actually more difficult because they had so many places to hide. The reality is that sustainable aquatic tourism is practically an impossibility, especially in a place where fourteen-year-old boys are allowed to freely catch sea urchins with hooks â€“ though those at least tasted good, and are in more than one sense a scourge of the ocean. 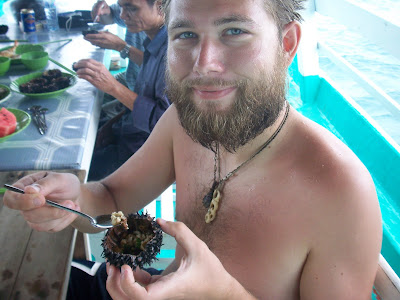 Lunch was delicious, and oddly enough the low-light of the trip was our visit to another beach, the much-hyped Sao Beach, which was actually quite, boring, and full of small urchins in the water that pricked our feet. But that was the end of the day, so we were tired from snorkeling anyways. As we approached our hotel by road, the waves looked huge, and they indeed were â€“ we spent the last hour or so until total darkness riding endless huge waves, the type that are so large you almost need a board to fully enjoy them… almost!
Today then, is lounging until the waves show up again in a couple more hours… wish us luck bodysurfing until exhaustion and darkness strike!

We don’t know how much internet access will be available in the Mekong Delta, but we just got some assistance from Tony in sorting out our route, so we will (most likely) travel from Rach Gia â†’ Tac Cau â†’ Thu Ba â†’ Thu Bay â†’ Vinh Thuan â†’ Ca Mau â†’ Nam Can (maybe, but only as a daytrip) â†’ Ca Mau â†’ Bac Lieu â†’ Soc Trang â†’ Can Tho. From Can Tho we plan on taking a four-hour high-speed boat to Saigon, avoiding several days of cycling on the notorious Highway 1… which is not exactly meant for foreign cyclists since it is the main trucking route (from China) that runs the length of Vietnam.

If you’re going to Joe & Hannah’s wedding this weekend, have a wonderful time, our happiest thoughts are with them (and you), and we all wish we could be there to celebrate!

And now for your moment of zen, ducks in bags: 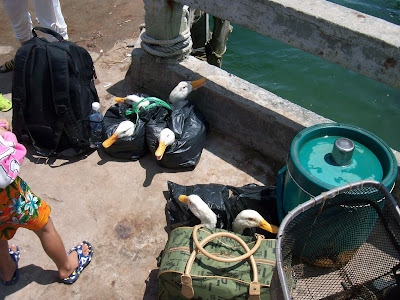