Mekong Delta: Phu Quoc to Can Tho, Floating Market 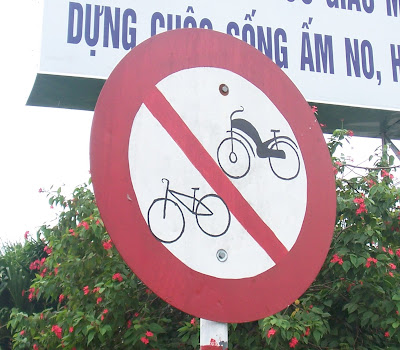 We have cycled across the Mekong Delta, and then bussed it from Can Tho to Saigon â€“ to avoid the notorious traffic of National Highway 1. Per usual, that was your one-sentence up-to-date tease, and now comes the detailed journey through the last six days of our Vietnam adventure:

Last Thursday was quite a surprising day, full of more than our usual level of frustration â€“ which actually ended up significantly altering our plans, though undoubtedly for the better. The day before was our last full day on Phu Quoc â€“ we stayed for the late afternoon body-surfing, and though the waves weren’t as ferocious as the day before, they were still definitely worth it. There’s something magical about paddling with a crashing wave, and then hitting the â€œsweet spotâ€ and getting rapidly propelled forward 10 or even 30 meters. You should try it, if somehow your life is lacking such an experience. 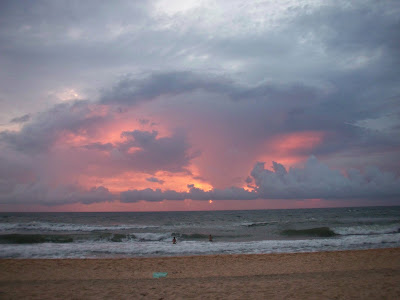 We paid our hotel at night, having to hit the ATM on our way to our final meal at Phu Quoc’s night market, and then we awoke before 6am to get an early start â€“ our ferry to Rach Gia left at 8am, and we had to cycle about 15km across the island first. Somehow we were actually ready on time, if not even early, and cruised across the island rapidly, against the flow of well-dressed students going to school. The uniforms showed their ages, though whomever picked pure white for the university girls wasn’t quite thinking things through all the way…
We pulled up at the same ferry terminal we’d arrived from Ha Tien at five days before, and after perfunctorily verifying â€œRach Gia,â€ we sat down to enjoy some breakfast â€“ though the soy sauce equally perfunctorily dumped upon our eggs didn’t quite improve the flavor at all. Soon it was past 7:30, and we pedaled down the lengthy pier, negotiated the fee to load all of our bikes (150,000 Dong, down from 300,000), got them and our luggage on the boat, and were just about to sit down, when disaster struck.
No, aliens didn’t attack, nor did crazed Phu Quoc Island dogs (they all seemed far too cute for that), but we were on the wrong boat. And at the wrong pier. Ultimately it was our fault, but our hotel told us wrong, the people we asked at the dock didn’t say anything, and how were we supposed to know that we needed to be saying â€œSuper Dongâ€ – the name of the boat company? So our tickets instantly became worthless, since the boat departed right on time, which meant instead of being in Rach Gia around noon, we had to sit at a shanty-town restaurant near the correct pier â€“ 4km away â€“ for almost five hours. Lunch was, as Liz astutely put it: â€œa feat of communication but not of culinary arts.â€ Our new tickets were even more expensive, since the boat was apparently better and faster, and the whole thing threw our entire schedule out of whack, since we’d planned on cycling at least 50km out of Rach Gia that day.
Instead the 1pm boat, which graciously only played silent Charlie Chaplin films amidst its bouncing amongst the waves, arrived on time at 3:30pm, so after we’d loaded up, gotten our bearings, and eaten some much-needed food, it was practically dark and therefore time to find a hotel. At least the hotel was decent, and we then had plenty of time to sort out our new simplified Mekong Delta route: head primarily due east through Vi Thanh en route to Can Tho, instead of our much lengthier initial plan of going much further south. By changing our path we saved 2-3 days, so with the one day â€œwastedâ€ we were still in the positive, since due to Vietnam’s enormous length, there is a definite sense of a time crunch at virtually all times. The 30 days on our visa our rapidly ticking away, and currently we only have about 20 of them left, with the vast majority of the country left to see. So we will be trying to cycle as much as we can, but will definitely have to use alternate transportation a few more times due to time constraints, and we are also weighing the possibility of even extending our visa so we can spend another week or ten days exploring the north. Don’t have to decide on that quite yet, but it is certainly on our minds.
Riding through the Mekong, thankfully, was very enjoyable, and has improved our views and opinions on Vietnam in general â€“ apparently the over-saturation of tourists has had a profound impact on the less-than-smiling island folk. But the chorus of â€œhelloâ€ returned amidst the rice patties and occasional water buffalo, and in two days we crossed the entire delta, along with its numerous bridges. 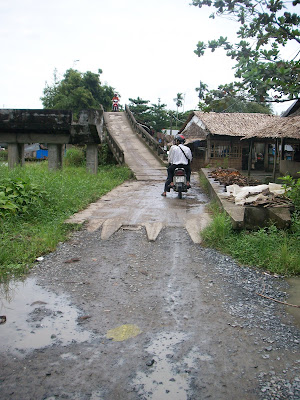 The second day, from Vi Thanh to Can Tho, was by far the best, as we rode through villages on a small single-lane paved roads, and since it is harvest time we got to see the rice crop first hand. It was all out drying on the road, in the varying stages of being processed, and the sights and sounds of real village life were a far cry from the tourism on either end.

A particular highlight was taking our bikes through a market, the path jammed with motorcycles coming the other way, such that we had ample time to enjoy the scenery: 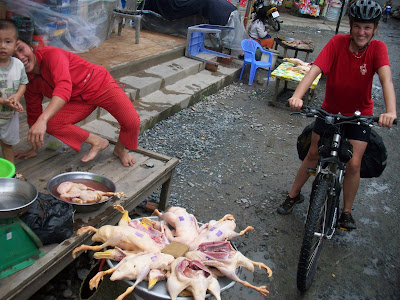 Arriving in Can Tho, it took a literal eternity to make it the tourist quarter, right by the river, from which early the next morning we took a wooden boat trip out to a floating market. Our hotel was directly across from an enormous statue of Uncle Ho, as in Ho Chi Minh, Vietnam’s Socialist/Communist hero and first leader. 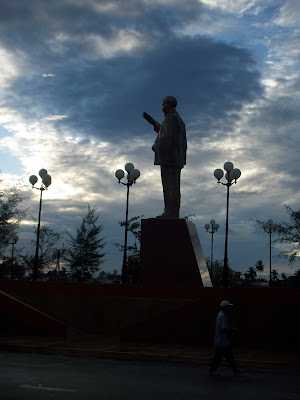 We enjoyed some snake wine with dinner – 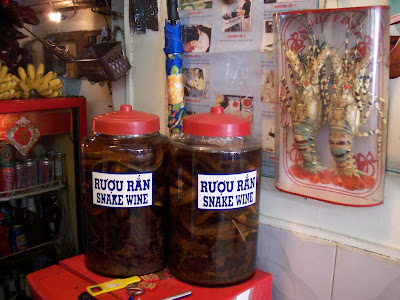 and though the canal part of our boat tour ended up being lengthy and boring, it was interesting to see all the boats bustling about, loaded up with fruit and other goods in massive quantities. 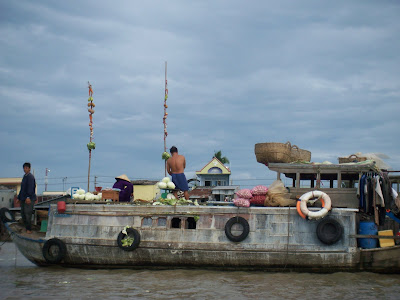 The boats displayed their wares on sticks, though as tourists coffee was the only thing we purchased â€“ buying a lifetime supply of sweet potatoes seemed a bit presumptuous and wholly unnecessary. 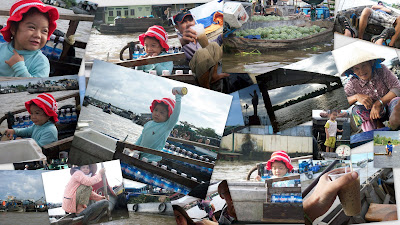 After breakfast we called our friends back home in Iowa, who were all celebrating the wedding of Joe & Hannah outside Iowa City. We luckily got to speak with the bride and groom, as well as a few other of our friends, so for a few moments at least we didn’t feel quite so far away from normal life and the people we love so much. The fact that Joe and Hannah are departing for Greece in a few days, to enjoy an amazing honeymoon, made even us globe-trotters quite jealous!
We then checked out of our hotel and cycled to the bus station, since four days of highway cycling didn’t sound that appealing or sensible. Our bikes actually cost more than us to put on the bus (we were 50,000 Dong, they were 60,000 Dong, total of about $6/person+bike), and after a strange bus-stand lunch, and getting hassled by the bathroom’s lady-boy attendant, we were on our way to Ho Chi Minh City. 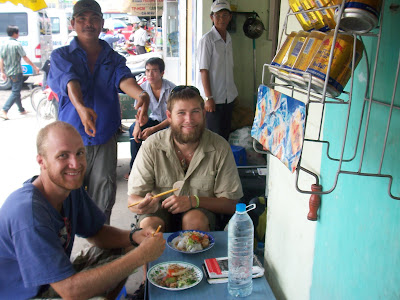 It’s probably worth noting that the entire city once known as Saigon, but renamed by the conquering Communists from the north after their deceased leader, is still usually called Saigon by its inhabitants, and the main District One is actually technically called Saigon itself. Un-digressing, our bus went about 1km before stopping and sitting in a line, for at least 20 minutes. Turned out the line was actually a queue for an enormous transport ferry that our bus and numerous others rolled onto. 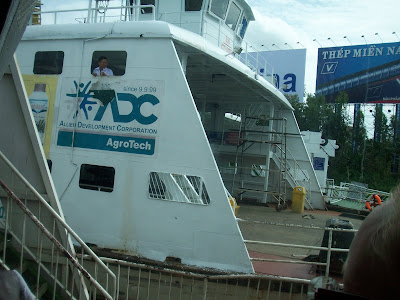 It was pretty interesting viewing the last stretch of the Mekong from on-board a ferry, though even more interesting was how a man told us to stop taking pictures. His angst was explained to us by a kindly English-speaking engineer, who said that the man didn’t want us to show the pictures back in our home country. Apparently he thought that the modern bus we were riding, with A/C and flat-screen TVs, never-mind the huge equally modern ferry and the relatively well-coordinated system of transit, was somehow embarrassingly inferior to whatever high-tech miracles must surely exist in the fantastic land of America. We quickly explained that America actually lacks most modern mass transportation, since everyone drives private cars, so the idea of a nice bus (sorry Greyhound) just doesn’t really exist, and due to our bridges almost the entire country is devoid of ferries. While we’re not sure our message was thoroughly conveyed to the man opposed to our photography, handshakes were at least exchanged as we returned back to our bus.
The remainder of the bus ride went well, though darkness and rain decided to simultaneously descend, scrapping our plans of cycling the 15km (or so) from the bus station to the main â€œtourist ghettoâ€ of Pham Ngu Lao. Instead we stayed at a slightly rundown hotel/flophouse, down the street from the station, which provided a surprisingly comfortable night of sleep, for a low 170,000 Dong/Room. The next morning we awoke, and by asking directions at many an intersection, were able to pedal our way to touristic nirvana quite easily. Now we’re staying in the land of travel agents, t-shirt boutiques, art galleries, internet cafes, guesthouses, international restaurants, eager moto drivers, book/sunglasses salespeople, etc.
We’ll be here for a couple of more days, seeing some museums, doing some shopping, eating until our bellies hurt, and on one day taking a tour out to the Cu Chi tunnels. Our post-Saigon plans aren’t totally determined, the choice seems to be either take a bus to Nha Trang, or cycle out of the city for a few days of riding on the Ho Chi Minh Trail. Either way sounds awesome, just have to make up our minds…

Trying, and failing, to avoid eye-contact with a sunglasses/lighter salesman,
Peace
A&E+3 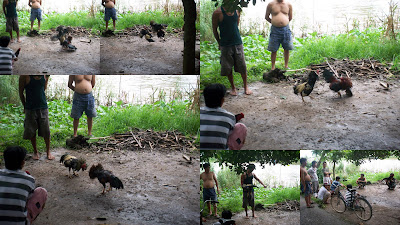 4 Responses to Mekong Delta: Phu Quoc to Can Tho, Floating Market