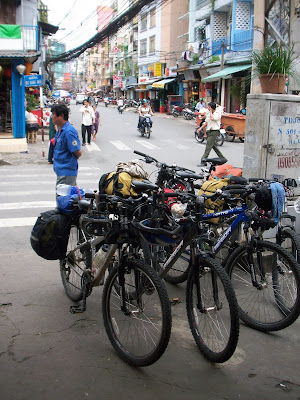 We chose to extend our stay in HCMC/Saigon, and by doing so we’ve also decided to extend our Vietnam visas (at a later, and more convenient, date). Now with only 15 days left on our visa, 7 more places we want to visit, plus the desire to cycle a decent amount of the country (including some of the Ho Chi Minh trail), and extension is essentially mandatory. Nha Trang, Danang, Hoi An, Hue, Hanoi, Halang Bay, and Sapa all sound too interesting to skip. Extending, probably for between a week and ten days (we’ll get another 30 day visa but won’t use it all), won’t negatively effect our overall time schedule, it’ll just push our Thailand entry date back a bit from the planned date of November 18th, though that assumes we spend our full month in Laos… and that is WAY too far off for us to figure out right now! Sorting out one country is complicated enough, never-mind two, but we’ve got to juggle everything to make sure we see and do all that we can, while not sacrificing riding time, but also keeping our focus to be back in Thailand â€œon timeâ€ so that we can get to the southern beaches for a little while before returning to America around December 10th.
Right now we’re on a seven-hour (maybe?) bus ride to Dalat, a so-called hill station in the central highlands of Vietnam. Our stay there will be short, probably only a day, and then we’ll take off through, and hopefully mostly down, the surrounding hills to get to Nha Trang on the coast. We’re even with the clouds right now, though the pounding rain only lasted a little while. Unlike the heat of the Mekong Delta and surrounds, it’s quite cool and comfortable here in the hills. 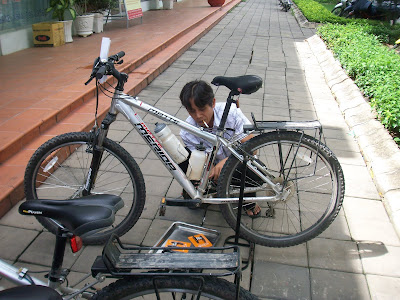 Back in HCMC, we wrapped our time there by retrieving our bicycles, fixed up quite nicely for only 100,000 Dong ($5), plus another 200,000 Dong for four new brake pads. We’ll probably destroy these new brakes when we cycle out of the hills, but at least it’ll be fun ruining them. As for our daytrip outside the city, both our destinations were pretty interesting. 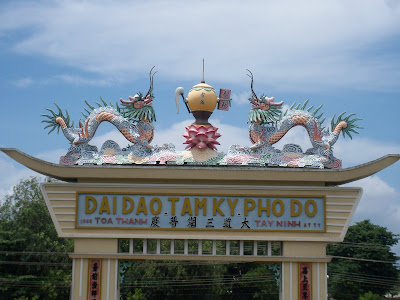 The Cao Dai Holy See was a unique religious experience, combining traditional Vietnamese music and song with a mixture of eastern and western religions. 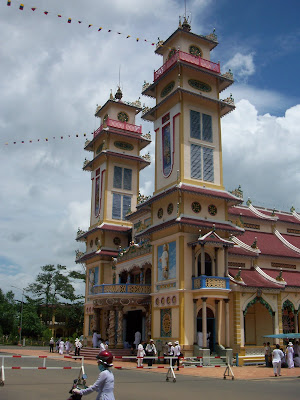 The architecture was colorful and gaudy, most everyone was dressed in white, 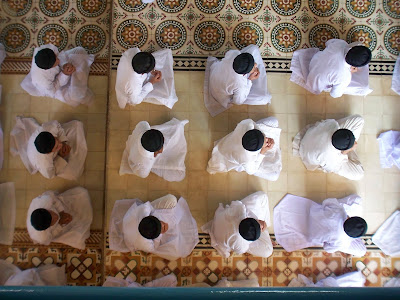 and a gallery upstairs was designated for the large amount of camera-clutching tourists, ourselves obviously included. 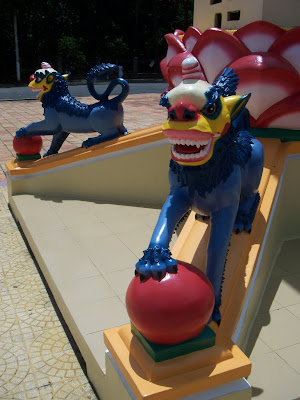 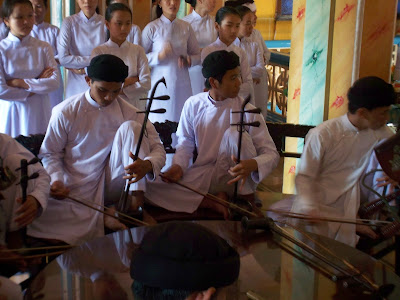 The ceremony was certainly the focus, the slight carnival atmosphere not quite interfering with the serious chants and prayer. 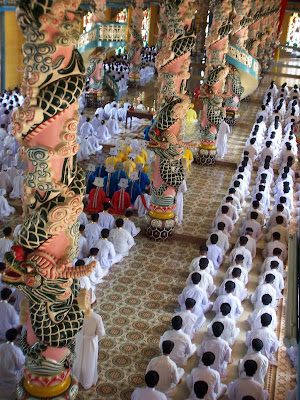 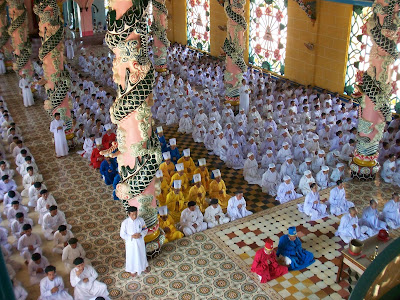 The Cu Chi Tunnels were also pretty unusual, the former Viet Cong stronghold from which Saigon was ultimately toppled. 200 km of tunnels lie underground, although only small sections are maintained for tourism. They are dark and small (though still enlarged for Western visitors), definitely claustrophobic, and at times painful to navigate since our bodies weren’t exactly designed for awkward crouch-walking.
Around the tunnels are plenty of kitschy displays, some simply morbid traps, and even a somewhat pricey shooting range. 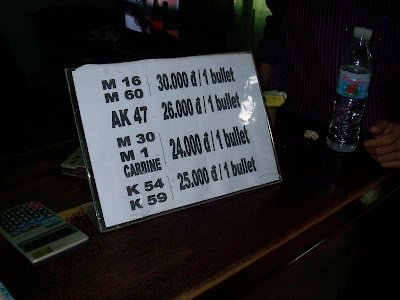 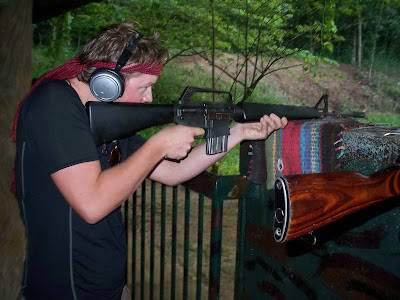 Luke was daring enough to explore an authentic and completely dark tunnel, while the rest of us were content with only the somewhat lighted and expanded main tunnel. 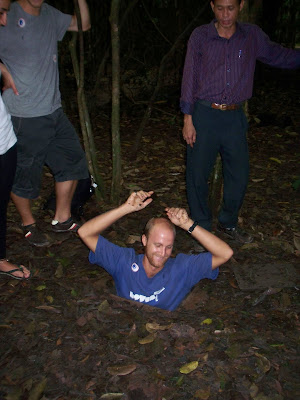 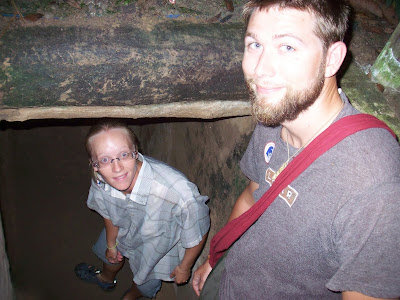 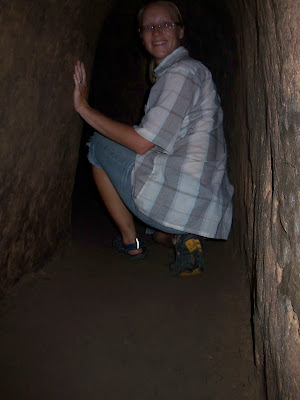 Those traps, numbering about ten, were gruesome and designed to maim and kill invading American soldiers. 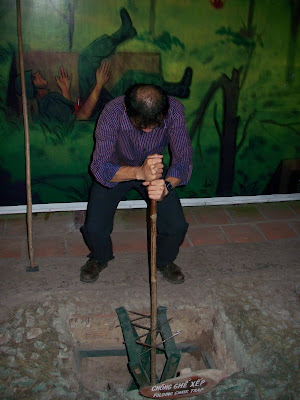 It was strange being an American tourist in a place so plainly anti-American, yet the conflict of capitalism versus communism that provoked the Vietnam War seems almost hilarious when capitalist Western visitors make up the bulk of the tourists visiting the preserved tunnels of communist resistance fighters. Plus, of course, Vietnam is still technically a Socialist state, though it really appears that the average Vietnamese person is much more a capitalist than the government wants to concede. Presumably the north will be much more socialist than the south, we’ll let you know when we get there…

But speaking of government propaganda and terrible atrocities, what of the War Remnants Museum? The ride there was certainly entertaining, though slow since we took cycle-shaws, and out front were plenty of captured American military equipment. 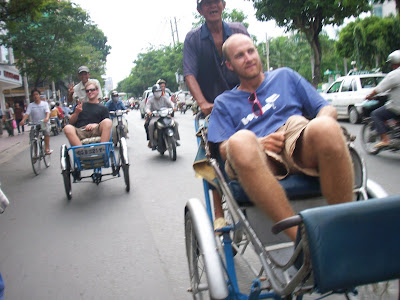 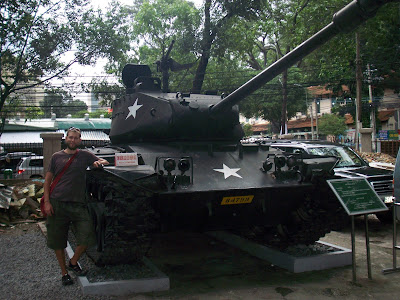 Inside were mostly photo galleries, dedicated to war victims and Agent Orange victims alike, making for a most sobering mood. Something about bloodied young soldiers and mutated even younger children puts a bit of a damper on things. But we be seekers of knowledge, even when learning it is unpleasant, and it was good to have a different perspective, from what we hurriedly learned back in high school, put on the Vietnam War.

Some moments of zen for ya: 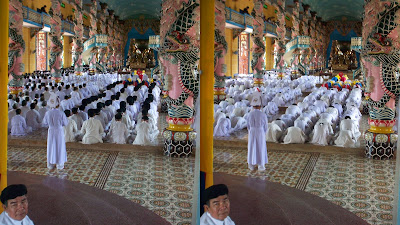 One Response to Ho Chi Minh City (aka) Saigon