It’s been a few days, evidently, since there’s oodles of things to update you all on. 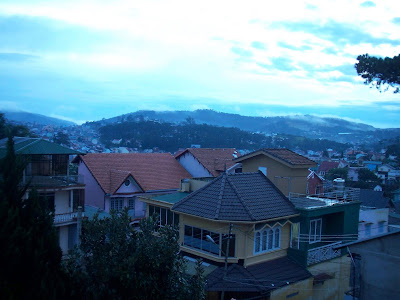 We arrived in Dalat, a former French hill station town set up in Vietnam’s Central Highlands, late in the day after numerous hours on the bus from Saigon. The cool air was a delightful contrast to the Asian heat we’ve grown oh-so-adjusted to over the past months, perhaps explaining our good mood despite the long ride. Dalat is a sprawling town, with rambling roads, so we were still adjusting our bearings when a hotel tout approached. Maybe it was because he was the only option and we weren’t sure where we were going anyways, though his excellent English probably didn’t hurt either, but we decided his $5/person rooms were at least worth a look. Thankfully, given the high hill we had to ascend, The Pink House proved quite nice indeed, and so that’s where we spent the next few nights.
Our first day was pretty much a wash, literally, since our sleeping in combined with the monsoon rains to cover pretty much the whole day. But at least we managed to locate a tasty vegetarian restaurant, much to Luke’s delight. 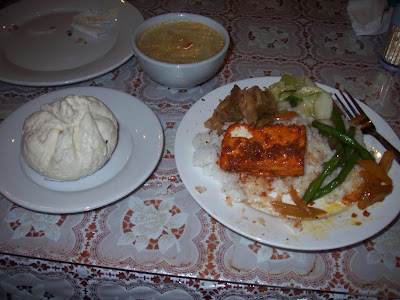 Take Two, the next morning, proved slightly more successful as we managed to see both Bao Dai’s mansion and Hang Nga Crazy House. 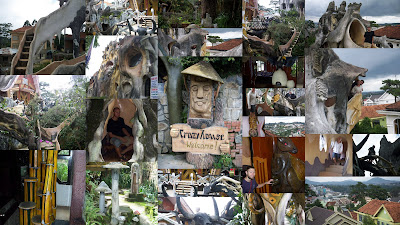 Funny names for sure, but BD was a former Emperor, and the Crazy House, built by the daughter of a former president, was certainly aptly named. The highlight of the former was the regal costumes for rent â€“ though why Anderson’s was so short will be an eternal mystery. 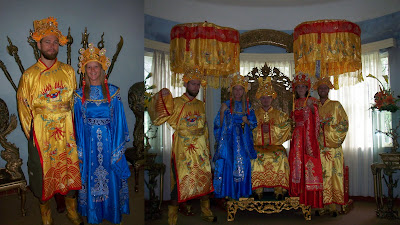 The latter, also a functioning hotel, had plenty of gaudy kitsch and concrete to satisfy the apparent needs of domestic tourists while bewildering we foreign folk. Then the rain came again, pounding us into a nearby bakery for lunch.
A very nice thing about Vietnam is the abundant bakeries. Vietnamese food is a tad simple: rice, noodles, or noodle soup (the ubiquitous pho) are the mainstays, but thanks to baked goods being so common there are also sandwich shops on almost every street corner. We have the French to thank (about time that happened about something :-), since they brought baguettes and croissants here, amongst other tasty morsels. This particular bakery also had a full restaurant, including relative rarities such as ‘macaroni & cheese’ and a very small ‘hamburger.’ 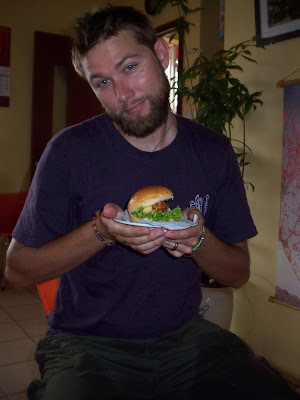 Throw in some above-average fruit shakes, and we had a veritable culinary party despite (or rather because) of the bad weather.
That night, everyone but Anderson (we all lame out sometimes) went out to see our hotel manager sing at a local bar, before trying it ourselves at a local karaoke bar.

The next morning, after our third great breakfast at a local restaurant, we began the longest day of cycling we’ve ever attempted. From Dalat to Nha Trang is almost 140km, with plenty of hellish terrain along the way. We knew it was going to be a long and challenging day, but it exceeded our expectations by quite a bit. The first 60km were all uphill, grueling and relentless with very few downhills for respite. Four hours later, exhausted (but not sweating thanks to the cool air temperature) but elated, we’d managed to pedal our way up into the clouds. Literally, they flew by us on the road, moving briskly at such a high elevation – Dalat itself is 1500 meters, and we certainly went MUCH higher than that…
Then came the best part of our day, though it came and went all too quickly. Thirty kilometers, straight downhill, with our sight initially blocked by the clouds: 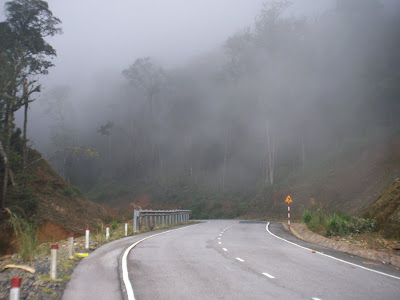 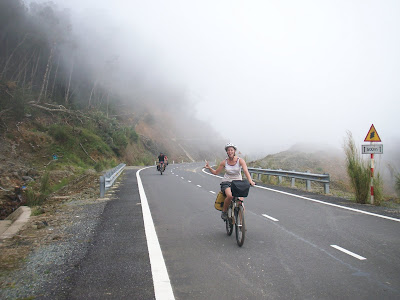 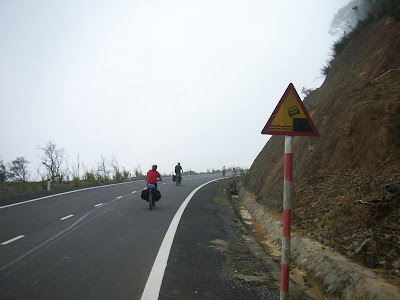 As we came around yet another curve, we finally looked out onto the vast expanse of hills, all lower than ourselves. 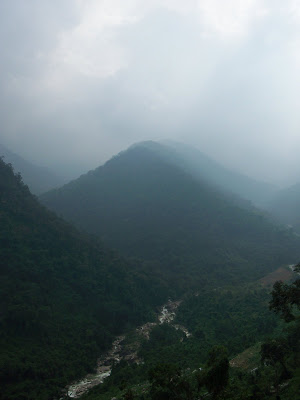 We continued to wind ourselves off the mountain, and though it took only 45 minutes of actual cycling (whizzing downwards at at least 35km/hr, twice our average speed), we stopped plenty of times to photograph the numerous waterfalls and other natural beauty. 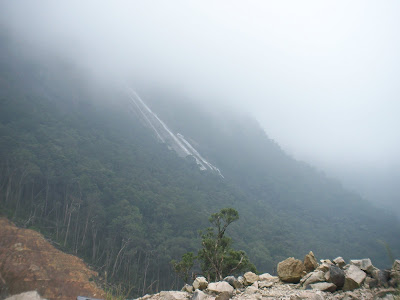 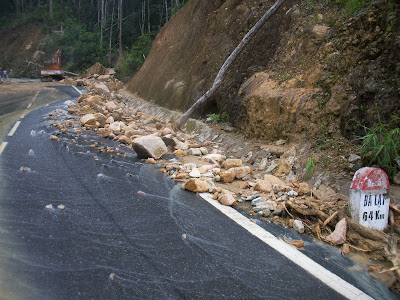 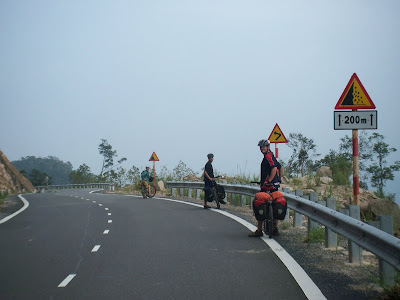 Five hours after leaving Dalat we finally found a restaurant for lunch, though there had been a few stalls selling ancient beverages and other sketchy products, no proper food had actually been available. Despite a complicated ordering process, rice hadn’t tasted so good in a while!
The third part of the epic journey proved arguably the most taxing, since our weary legs were once again exposed to uphill inclines, now smaller but numerous, and though we were on the â€œnew roadâ€ it was apparently not yet completed since sections of it were under construction or just dirt. But, we fought onwards, and eleven hours after leaving Dalat we finally pulled up in Nha Trang, practically delirious, and not just with pride. Hotel and dinner were acquired quickly, as was sleep. 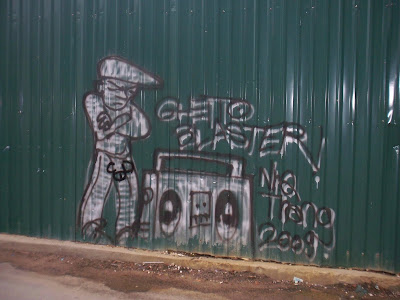 Nha Trang’s sights were taken in quickly: the beach was alright but lacked waves, the water-park was closed until the weekend, the microbrewery’s beer was all fruity and lacked full-bodied flavor, the 12th century Cham Towers were small but interesting (and in use, always a bonus when visiting a temple), the mud-bath was soothing but somewhat pricey ($5/person for 15-minutes in the mud and then 20 minutes soaking in hot water), and our snorkeling/party-boat was very fun and very cheap.
The in-water wine-party was over-the-top (and clearly enjoyable), lunch was tasty, the boat even had a band, and though the snorkeling equipment was shoddy the fish and coral were numerous and interesting. We even got to play volleyball on an island, after we paid the 10,000 Dong admission fee, of course. 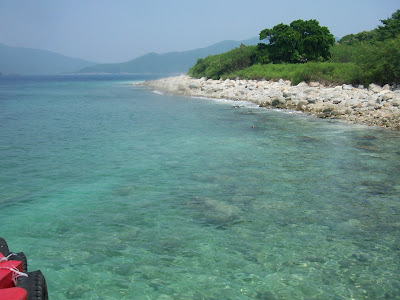 After three nights in Nha Trang we were ready to leave, however Blaise had (wisely in his case) succumbed to temptation and decided to enroll in Octopus Diving’s four-day PADI certification course. Can’t blame the guy, great price for a great experience, with a professional company, just not what we wanted to do. Christine also decided to linger longer in Nha Trang, charmed by its beaches. So ourselves and Luke have set out on a mini cycling adventure, from Nha Trang to Quy Nhon. Since our two stops along the way, Van Gia and Chi Thanh, haven’t had readily available internet access, this can’t get posted until we actually reach our destination. Chi Thanh technically has internet, our hotel’s wi-fi is just frustratingly unable to connect, and all the internet cafes were overflowing with adolescent gamers so there was no room for a bunch of old-timers like us who want to check their email.
It’s fun being totally off the tourist trail, although it means that there is little to do other than ride as much as we can each day. Yesterday we attempted to locate some hot springs shown on our map, but after backtracking several kilometers, getting conflicting directions, and then finally being taken to a pipe â€œfrom a factoryâ€ squirting out scalding hot water, we’d had enough and continued on our journey, amazed at how tough a language barrier can be sometimes. Everyone seemed to know of the hot springs, just not where they actually were!
Continuing on, a long day of riding ended with us relaxing in a nice, quiet hotel, having completed our third 100km+ day on the trip. We had a great dinner at a family-run restaurant with two kindly owners, found some tasty packaged snacks at a general store, and then were escorted to our hotel by about 30 young boys on bicycles. All the boys were having fun, it was Saturday night after all, and this town probably doesn’t get too many foreigners. They used their limited English on us, gave Liz a ride on the back-seat of one of their bicycles, and enthusiastically posed for photos with us. A nice ending to a long day!
Today we rode about 75 more kilometers to get to Quy Nhon, of which the second half had some beautiful beach scenery (though everything we’ve seen scenery-wise since we left Nha Trang has been nice and beachy), and our final destination supposedly has some Western food, which we’re intrigued to try! We’ve found a nice hotel, though not quite in time since we got rained upon, but we’ve met back up with Christine and are all relaxing in our room, showering and catching up.

More news with less waiting soon, we promise, DRAGONS & KARAOKE videos and photos will be up soon – can only squeeze so much multimedia into one post 🙂
Peace
A&E+L+C (B will meet up with us in Hoi An)

And now for your moments of zen, much-anticipated and much-deserved: 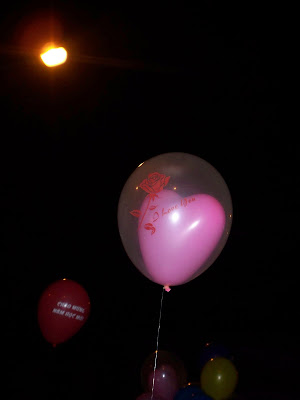 One Response to Dalat, An Epic Ride, Nha Trang