New article up on Travelfish, all about exploring the ancient glories of Angkor by bicycle.

Karaoke and dragons, how could we forget?

There were some fantastic other performances as well (Liz doing â€œHit Me Baby One More Timeâ€ for example), but the group finale was certainly a great highlight!

Back on our first night in Dalat, we ended up having perfect timing, as we arrived in town for the annual Full Moon Festival. Of course we didn’t quite know that, so we literally stumbled into a massive celebration while wandering around after dinner, and were quite impressed with what we saw. Dragons en masse, with accompanying bands of percussion, though all children. It was definitely a night of fun for the entire community, so as just about the only foreigners around, we were just fortunate to watch it. For hours dragons shook their best, drums banging loudly behind them, with crowds packed in thick on all sides. Balloons were for sale, excitement was in the air, and at times the dragons even breathed fire. Enjoy all the videos, we definitely enjoyed watching them â€œin real life.â€

Catching up to now, we’ve spent the past two nights in Hoi An. Before that our two day in Quy Nhon were enjoyable and relaxing, as was the ride there (well, it was also long, hot, and hilly). 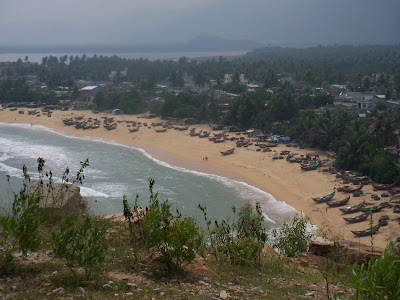 Beach time was the main priority, though Anderson managed to fit in a brief tour of the town as well. 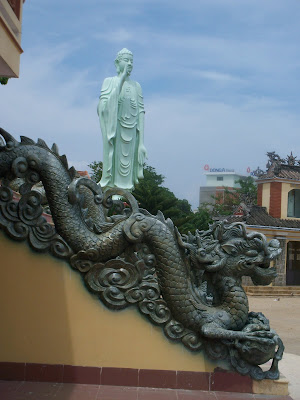 The bus ride, which we thought had to take us to Danang, resulted in us and our bicycles being dropped off at a random junction, literally in the middle of the road, 10km outside of Hoi An. 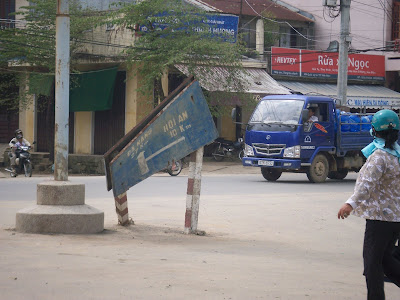 Renowned for its â€œOld Town,â€ there’s also plenty of tourist crap available for sale in this town â€œthat oozes charmâ€ according to the guidebook. So even while wandering amongst 19th century buildings that somehow survived the Vietnam War, we’re constantly offered $2 t-shirts, $10 custom-made pants, cheap shoes, or lacquered goods for varying prices. The buildings are indeed unique and interesting, and the shopping was also more exciting than usual, too â€“ none of us managed to escape without spending more than a few Dong! 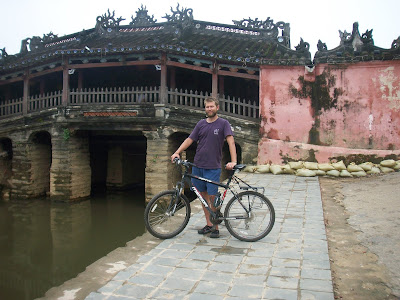 We stayed at a somewhat fancy hotel, complete with a swimming pool, free cocktail hour (more like adult-smoothies), and a breakfast buffet. All that for $10 each per night, yet for our budget that still counts as living it up :-). We have all reunited, although finding Blaise on Hoi An’s endless main drag took us a bit of time, but it all worked out in the end.
Today actually ended up being a rather hilarious day, due to us being a bit overly assumptive. We planned on cycling from Hoi An north up to Hue, about 100km or so â€“ a long day of riding for sure. We got a bit of a late start, due to both the desire to sleep in and needing to pick up some last-minute tailored clothes. Oh, and it kept pouring rain, so loud it awoke us even before the alarm went off. But the weather managed to cooperate, so around 11am we finally took off, riding along the coastal road as we were advised. The beaches between Hoi An and Danang were recently mangled by a storm, so they certainly didn’t look very nice, with displaced sand, top-less palm-trees, and damaged buildings everywhere. But the ride was nice enough, and as we skirted Danang and headed up into the hills, an enormous Buddha statue, along with dark skies, beckoned us onwards. 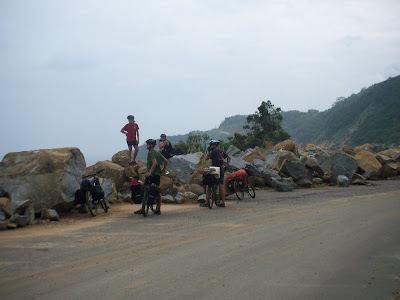 There was lots of road construction, and the hills were steep, so after a while we stopped for some lunch, finding a nice restaurant down by the ocean. The seafood was great, and very affordable since it was not a Westernized place. Refueled, we continued to ride along the coast, curving along the hilly road. Then disaster struck: the road ended, amidst piles of rocks and trucks moving dirt…
Apparently we’d missed a turn just past Danang, which would have taken us back to the main highway and onward to Hue. But, given how late it had gotten, going any further was foolish, so we backtracked the 11km we’d ridden past Danang, thankfully now mostly downhill, though we weren’t able to beat the down-pouring rain. Cycling through the entire area outside of town took a while in itself, and there ended up being a total lack of hotels. So we headed towards the city center, the big building towering over everything serving as an easy landmark. While riding across the Song Han bridge, the monsoon finally arrived in full force, conveniently within one kilometer of the main hotel district. So we got soaked, had a bit of a hassle finding an affordable hotel, but ended up at the funnily named Golden Gate II, dripping water all over their floors despite our best efforts.
Now we’re just relaxing, in our fourth floor hotel room, the corner office with a view over some of the soggy streets, as the rain continues to pour down relentlessly. We’ll try for Hue again tomorrow, should be about 60km now, and we’ll make sure to ask for directions a bit more frequently this time around!

Hope you are less wet than we are,
Peace
A&E+3

Here’s your moment of zen, the contents of Liz’s fully loaded handlebar bag: 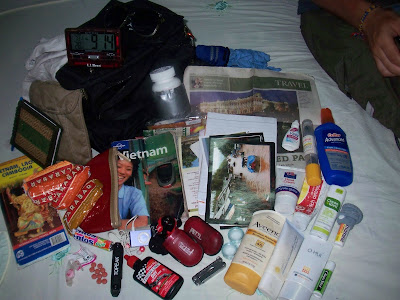