From Danang to Hue to Hanoi, Travelfish Article: Confessions of a Cheating Cyclist The newest article up on Travelfish is entitled Confessions Of A ‘Cheating’ Cyclist. It goes into some depth about all of the unexpected factors we’ve encountered while cycling.

We’ve bounced from Hue all the way up to Hanoi, and while we’ll be here for at least another day or two, there’s one final Vietnamese H-Town in our future: Halong Bay. The good news is that we should be done with bumpy buses, and are ready for tackling a massive leg of cycling. Thus far we’ve done about 1600km over the past 10 weeks, we’ll cover the same distance in the next four. So the intensity is definitely getting cranked up a few notches!
Our cycling plans from Danang to Hue earlier in the week were actually psyched out by the gray and rainy skies. We’d done too much weather-oriented internet research the night before, and the forecast seemed to signal an inevitable downpour, so we thought we were being wise by cramming ourselves into a packed minibus rather than going for a long day of riding. Of course it didn’t rain a drop until darkness fell in Hue! Plus the bus ride was tremendously bad, as were packed in tight in tiny seats with no leg room whatsoever for over three hours and our bikes were roughly manhandled. But hindsight aside, we thought we made the best decision we could and it turned out we were wrong. 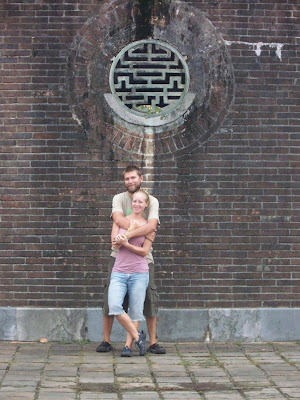 Hue was at least a decent enough place to be, we spent a fun afternoon exploring its ancient citadel before getting rained on. 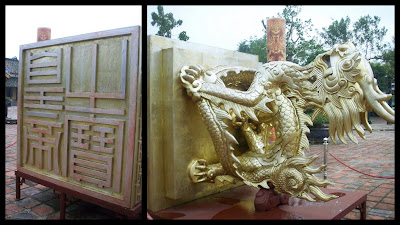 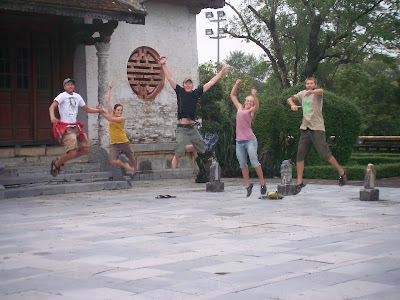 We posed for a few group photos, stared at some military equipment recovered from the American enemy, and checked out some pricy art galleries. 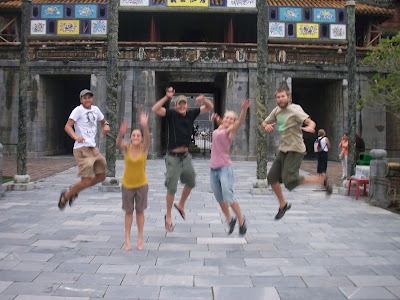 The two of us then went to a cultural performance, featuring traditional music and dance, which was short and sweet but pretty interesting. Highlights included a ‘dance for the king’ with Chinese dragons giving birth and a cheerleader-style pyramid formed in the dark except for strategically placed glowing lanterns. Pictures and a video will undoubtedly due more justice than that horrid description: 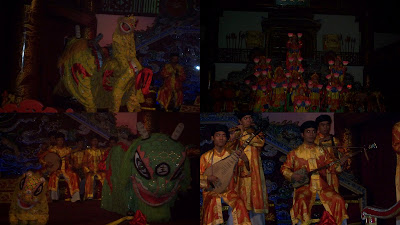 We also enjoyed an Imperial Dinner, a romantic multi-course feast that was elegant and delicious. While it wasn’t quite up to par with a similar dinner we ate in Korea, it was also a fraction of the cost. And the Dalat wine we had nicely completed the meal. 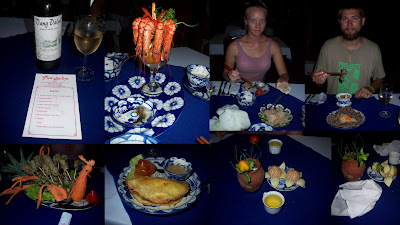 Otherwise in Hue we were mostly just ready to move onwards, as we are feeling a bit of traveler’s malaise at the current moment. It’s hard being on the road for this long, and it’s frustrating that we aren’t able to cycle quite as much as we’d like. The sheer size of Vietnam has meant we’ve had to ride many more buses than desired, and there really isn’t much we can do about that fact. Plus, to be honest, what we are seeing right now is generally a tad boring, and the gloomy weather certainly doesn’t help. While we are still enjoying ourselves, we cannot wait for the focus to return to cycling, and our current somewhat aimless wandering to be replaced by more solid adventure. We don’t really know what to expect in Laos, other than that we’ve heard great things from many people, but we are all ready for a change. At least Halong Bay should be enjoyable, as it is a beautiful and scenic location, but following that we will be beginning a stretch of about twelve days of hard cycling en route to Luang Prabang, Laos. We’ll make a stop outside Phonsovan for a day to see the Plain of Jars, but other than it’s a lot of time in the saddle. 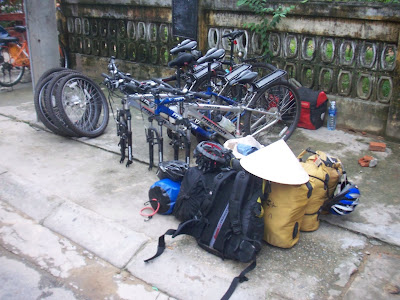 Hanoi so far has been pretty nice, after arriving here via a more than reasonable overnight sleeper bus, we spent today walking through the Old Town. 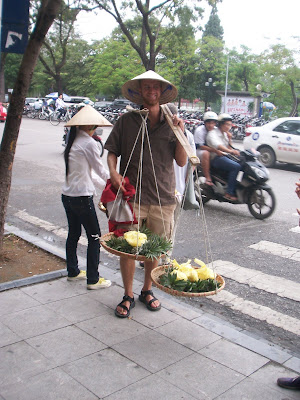 Full of old buildings and an active populace, the tourist shops seemed balanced out by ‘real’ stores. We are also staying near a large lake and a nice park: 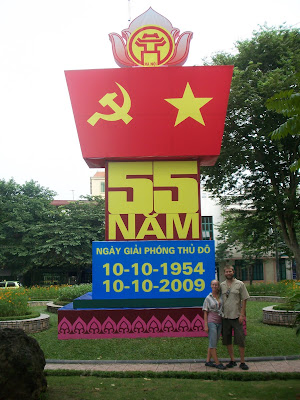 Tonight we are going to see a traditional Water Puppet Theater, which is supposed to be most impressive. We’re ready to be impressed…

Tomorrow will be spent here again, and then presumably the next day we will ride for Halong Bay, a two-day journey.

Here’s your moment of zen, from Hue: