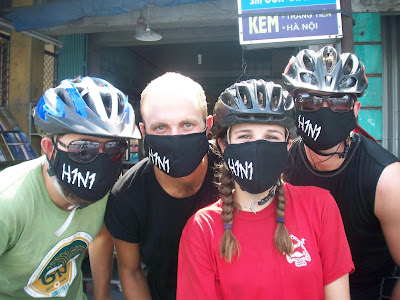 This was written two short days ago, just didn’t have internet to post it on our way back to Hanoi. Tonight we are celebrating Blaise’s 23rd birthday (technically it starts at midnight), and are mentally preparing for our departure towards Laos.

We’ve made it to Halong Bay, or rather the Bai Chay district in Halong City, and are currently relaxing in our hotel. We’ve had a few varied days since the last post, starting off with the Thang Long Puppet Theatre and concluding most recently with a Halong Bay boat tour. As for the show, the entire performance took place in the water, with a wide variety of puppets â€“ human, animal, and supernatural â€“ all part of a traditional Vietnamese legend. To the side of the aquatic stage were a group of musicians and singers, who provided both the music and the characters’ voices. Overall, despite it being their fifth performance of the day, the cast was quite enthusiastic and seemed genuine. There’s plenty more information about the art form, and a photo of the theatre on that magical source of information Wikipedia.

Our final day in Hanoi was somewhat business-oriented, as our main priority was getting more pages put into our passports. The US Embassy offered the service for free, so the only cost was the moto rides we took through the city (we opted for non-bicycle transportation for ease and a change of pace). After picking up our passports we also did a little sight-seeing at both Van Mieu (Temple of Literature) and the One Pillar Pagoda (literally a photo-op). 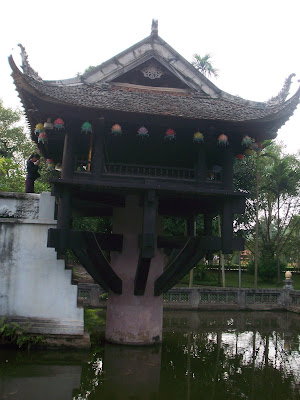 We also got some much-needed chain lube delivered for our bicycles â€“ here they only use motorcycle oil which it too thick and nasty for our sweet rides.

Speaking of our bikes, the two-day 160km ride from Hanoi to Halong City went by rather quickly since the road is smooth and slightly downhill. We had some minor difficulties actually getting out of the city, not only was it a bit complicated to find the road we wanted (ended up taking a parallel highway, so it all worked out), but we also had some bicycle issues to start the day. Just derailleur and brake issues, nothing major :-), and thankfully Blaise is a skilled mechanic!
Due to a lack of hotel options in Sau Do, the town roughly half-way through our journey, we had to stay at a somewhat sketchy place that also offered massage, but our room itself was more than reasonable. Everything in Sau Do was cheap, our dinner of pho and a Bia Ha Noi on ice was only 30,000 Dong, and our breakfast was such a good deal we had to have the seller write down the price so we could actually believe her. For 8 omelet-sandwiches (Liz eats hers without the egg, of course) and 5 coffees the total bill was 70,000 Dong, around $4 for all five us to get nice and full. At first we thought she meant 70,000 Dong each, with seemed ridiculously high, and we’re obviously unsure what exactly she thought was going on inside our brains, but it all got sorted out with smiles all around. The fresh fruit â€“ apples, pomegranates, and plums â€“ were also delicious, completely one of our most well-rounded and tasty breakfasts yet. Our second day of riding, which ended up totaling 90km, was supposed to be about 12km shorter, but we took a bit of a wrong turn. We misread our map when we were quite close to Halong City, and took an island just off the shore, which was accessible by a bridge, as Cat Ba Island, home to a national park and a small town with hotels and tourist amenities. 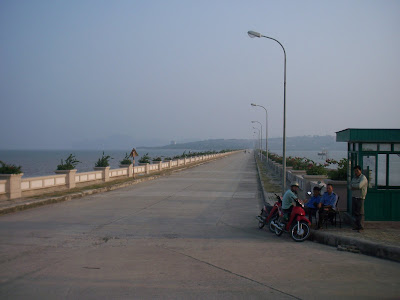 Turned out, after we’d cycled across most of the island, failed to find anything even resembling an affordable hotel, and examined the port in detail, that we were actually on Tuan Chao Island!
That meant we got to arrive in Bai Chay, the tourist-side (with hotels and seafood restaurants) of Halong City, in the dark instead of before sunset. It seems we almost always arrive at a hotel either in the dark or soaking wet, so in general darkness is the preferable choice. There is an entire block, called Vuong Dao, of hotels here, which worked to our advantage as we were able to get nice, clean rooms for a low-price. At least there was still plenty of seafood waiting for us: 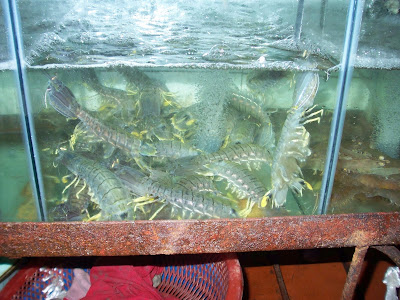 Today then, was a day of uber-touristing, since we only allotted ourselves two nights in Halong Bay. We ended up splitting up, with us and Blaise opting for an afternoon day tour, while Luke & Christine are staying overnight on a boat. We’ll meet up again at noon tomorrow, and then cycle half the distance back to Hanoi. This is the only time we’ve had to retrace our path, but we all want to focus more on cycling, and are sick of having bicycle problems created by bus rides. The hills of Laos may prove tortuous, but until then we are still craving more riding days than bus-riding days. If all works out as we hope, we will not have to take any alternate transportation throughout Laos, but obviously we have no idea what may happen… 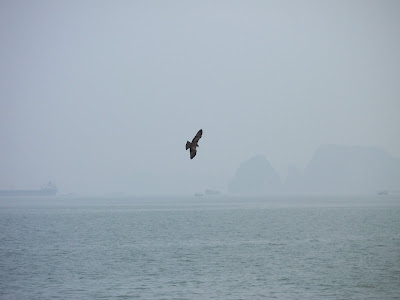 Junks and other tourist boats were numerous, all lazing along through the water. We stopped at a floating village, where seafood was being farmed and girls were selling fresh fruit from boats. 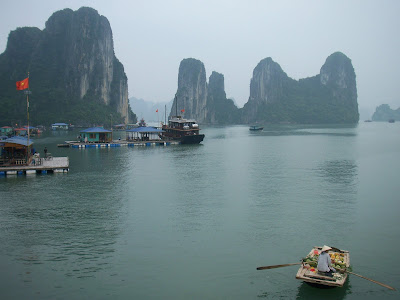 Everywhere the scenery was impressively jaw-dropping, every angle was so interesting we didn’t really know when to stop taking pictures! 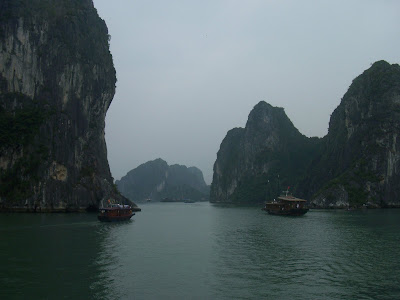 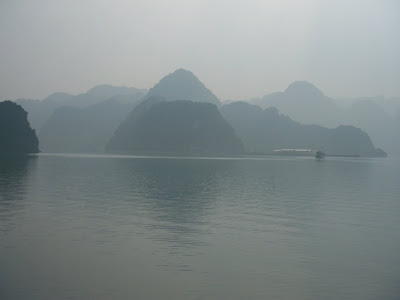 We have obviously been fortunate enough to see many natural wonders of the world, but Halong Bay is certainly near the top of the list, well worthy of its UNESCO World Heritage status. 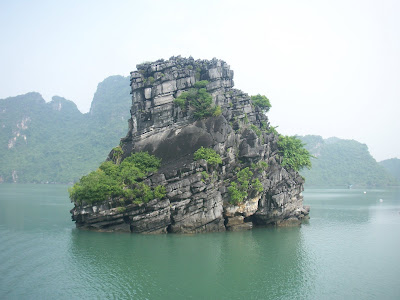 We negotiated a cheap ride on a boat that was dropping a group of tourists off at Cat Ba island, the place we’d incorrectly thought we were yesterday, so we ended up with the top deck to ourselves on the way to the island, and the entire boat to ourselves on the way back. We’d actually tried to book a private boat earlier in the day, but when we returned after lunch the guy we’d talked to had disappeared, but it all worked out as that was pretty much what we got.

And our crew were low-key and friendly, even sharing some of their banana moonshine with us. 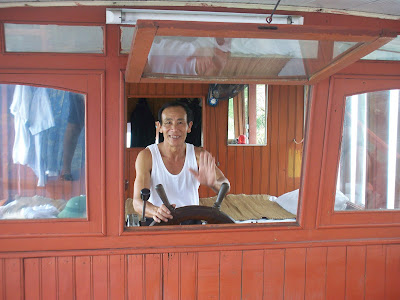 Tonight is just relaxing, we’re going to go out for a(nother) seafood dinner soon, and maybe watch a movie later, but in the meantime Nat Geo is providing sufficient entertainment/background noise… 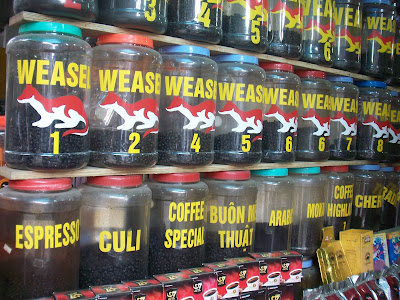 Yes, that is weasel coffee you see… eaten, digested, and excreted by ‘special’ Vietnamese weasels, which makes the coffee smoother and more deliciouser, or something.