From Hanoi, Vietnam to Sam Neua, Laos, Water Buffalo in the Mud 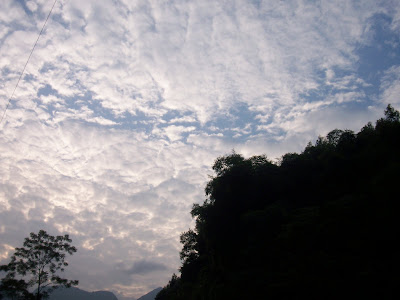 Been a while since we’ve blogged we know, but while we can easily blame the lack of available internet, the exhausting terrain that we’ve covered over the last week is equally responsible. Most nights of late we have simply eaten and then gone to bed, only to arise early the next morning and begin pedaling again. 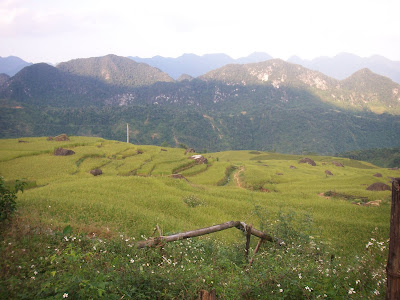 Gone are the days of flat terrain and 20km+/hr, now we climb mountains up to 2000 meters, average about 14km/hr if we are lucky, and have to push our bodies to their outer limits to merely reach our intended destinations. 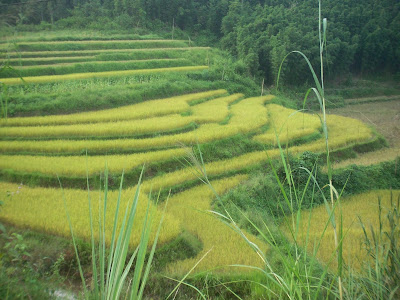 Our journey has taken us from Hanoi â†’ Hoa Binh (75.81km), Hoa Binh â†’ Mai Chau (65.35km), Mai Chau â†’ Ba Thouc (62.74km), Ba Thouc â†’ Na Meo (102.58km), and that was all just to get to the border of Laos! The quality and value of hotels has definitely decreased along the way, though the kindness of the people and the jaw-dropping-ness of the scenery has also significantly increased.

Only the first day of the four days of travel through north-western Vietnam was mostly flat, with the size and volume of massive hills increasing by the day. 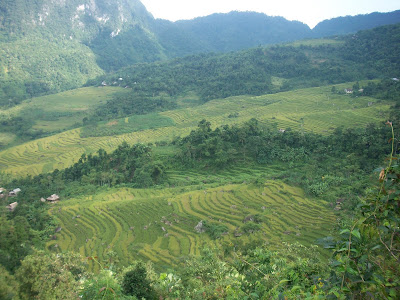 By far the most draining, both mentally and physically, was the 100km+ journey to the border at Na Meo: we began cycling shortly after 8am and didn’t finish until an hour after dark around 7pm. While our headlamps helped light the way somewhat, it was far from a triumphant finish. The day before, when we traveled to Ba Thouc, also ended in darkness, though that was at least somewhat our fault, as in choosing to follow a sign and local advice, rather than the major highway, we ended up on an extreme anti-shortcut. 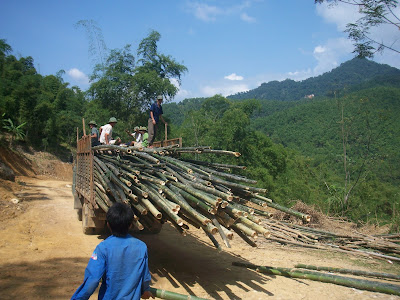 That meant that for about 50km we were stuck truly mountain-biking on a rocky dirt-path, primarily used for bamboo logging, cutting through isolated villages in a hidden and majestic valley. 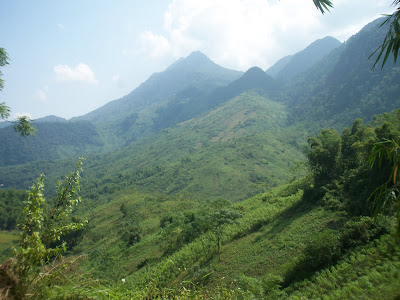 Downside was that the terrain took a definite toll on our bodies and bicycles, several of us had sore wrists from all the shaking, and Anderson’s bicycle rack actually broke in three places from all the pressure. 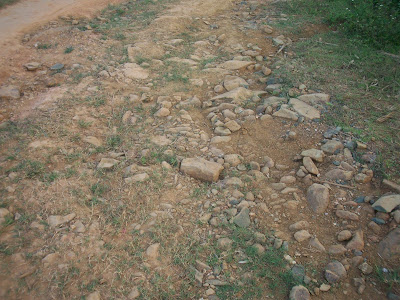 It’s still useable, but only after using a few zip-ties to reconnect everything! We’ve also managed to squeeze in a quick dip in a river, and spy on plenty of other river life as well… 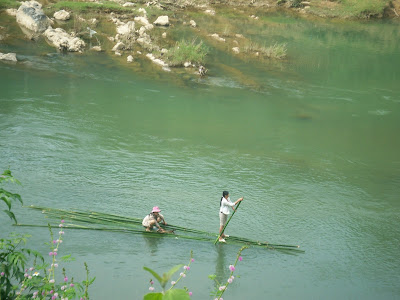 Crossing the border (Na Meo in Vietnam/ Nam Xoi in Laos), besides being time-consuming (around 1.5 hours) and expensive ($40 for Americans, $42 for Canadians), was a hassle-free process. On the Vietnam side we did have to get our bags x-rayed, though at least they chose not to actually search through any of our belongings, and on the Laos side we had to pay 2000kip (about 25 cents) for a medical exam which consisted solely of a temperature scan of our heads. After much waiting, and filling numerous forms out, we at last received our Laos visas, and so long as we walked our bicycles across the border, we were at last able to enter Laos. 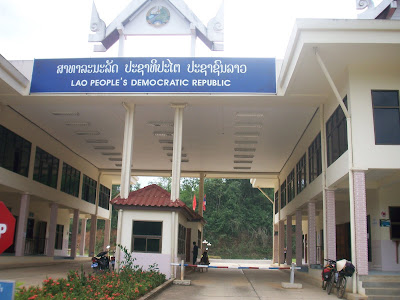 We’d exchanged US dollars (obtained at a bank in Hanoi) for stacks of kip in Na Meo before we left Vietnam, as Laos obviously does not accept Vietnamese dong. Everywhere dollars (and traveler’s checks) are usable, and Thai baht is an acceptable currency as well â€“ which is good since we have some of those left from Thailand â€“ but while Laos does have ATMs they are relatively scarce outside of the major cities and charge a hefty surcharge as well. So we’ll be mostly cashing our remaining traveler’s checks, since paying $2 for every $70 we withdraw from an ATM is not exactly a good deal. 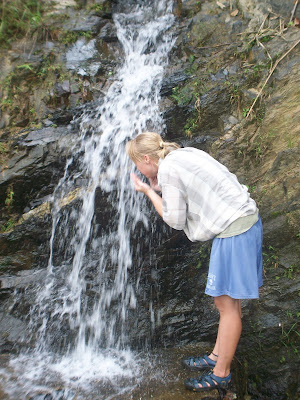 From the border we then proceeded up into the hills of Laos, which are not all that different from the hills of Vietnam (obviously). They are filled with high mountains, beautiful valleys full of farms and villages, and plenty of limestone karsts. Our first day in Laos, Na Meo â†’ Vieng Xay (58.96km) involved the toughest mountain we have climbed yet, with several sections signposted at a 12% grade, which took what seemed like forever. Again yesterday, Vieng Xay â†’ Sam Neua (30.36km) we had a massive hill, totaling around 3km of straight uphill travel, but at least the overall ride was short and relatively relaxing. The reality is that while the hills are gargantuan and time-consuming, they are almost more challenging mentally than physically, since with our bicycles dropped down to a very low gear (1-1 these days with our weary legs), the pedaling isn’t really so challenging in itself, but the sheer amount of repetition, combined with the minimal ground covered per pedal, makes for quite the challenge. But the feeling of victory, short as it may be, when we reach the top is practically incomparable, though we can only rest so long before we start to get cold. But then there’s a massive downhill reward, which is as exhilarating as the ascent is exhausting. Flying down mountains, with our hands on our brakes to maintain control, the kilometers pass by as quickly as our sweat disappears.
Laos is definitely, at least this far north and at such high elevation, quite chilly in the shade during the day, and cold everywhere at night. We’ve had to dig out out cold weather gear, stowed at the bottom of our bags until now, and the vast majority of the local people are wearing pants and hooded sweatshirts.
Today then, is a much needed day of relaxation and rest for our weary bodies, and then tomorrow we’ll be back on the road, traveling to Nam Neun, about 100km away. Sounds fun…

Internet access, and the terrain, should be more favorable within a few days when we arrive in Phonsavan, home to the famous Plain of Jars. Until then,

One Response to From Hanoi, Vietnam to Sam Neua, Laos, Water Buffalo in the Mud