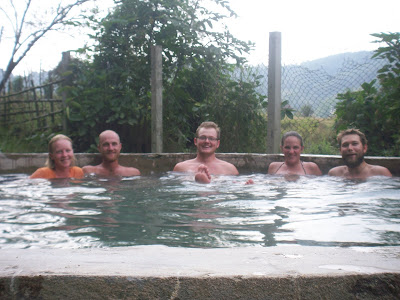 From Sam Neua to Phonsavan, just another few days in Laos, eh?

In addition to some delicious Indian food, we found at least one other distraction in Sam Neua, since the temple and weaving/handicraft stores were both letdowns. 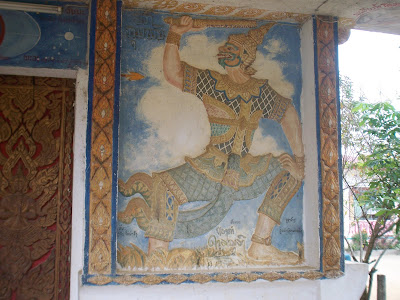 The temple was, well, lame, with cell-phone chatting monks and amateur paintings, and the shops were overpriced with somewhat generic goods. But at least the hot springs, 17km (and a $25 round-trip songthaew ride) outside of town, were therapeutic and relaxing â€“ if not the most clean/pure. For 5,000 kip (under $1) we could hardly complain, and it seemed all and all that we were in a way foolish tourists for even bathing in the large outdoor tank â€“ with a rock bottom and plenty of floating algae, it wasn’t exactly paradise â€“ since the indoor bathtubs had perfect clean water pumped into them for a more sanitary bathing experience! Nonetheless, we enjoyed our time amidst the rice fields greatly, got our soak on, and even shared our ride bank with a few thankful villagers. 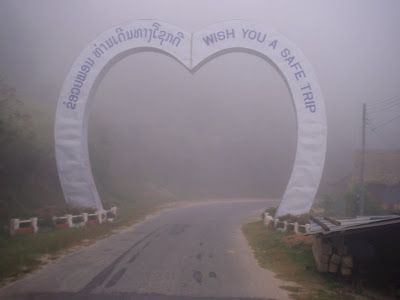 The next morning we rode off, we as in the two of us, since everyone else opted to take the bus to Nam Neun (that’s pronounced Nu-un), leaving before 7am since we had 100km of hills ahead of us. Sam Neua was chilly, as in almost frigid, when we left, with clouds sitting all about and dew quickly appearing upon our sleeves. 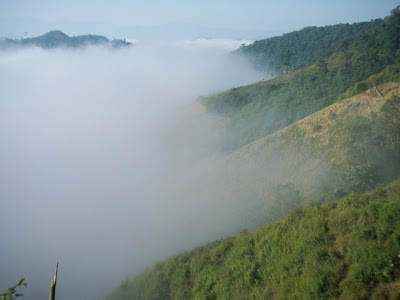 But the hills couldn’t stop us, even as the clouds melted away in what all-too-quickly became the noon-time heat. 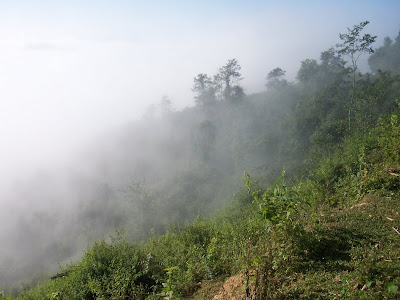 Kilometers passed, slowly and steadily, even when our friends flew by in a speeding bus. 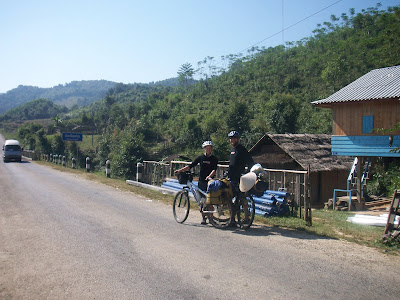 Thankfully we’d bought snacks the night before, as we never saw a ‘proper’ restaurant the entire time, though 55km into the ride we at least stopped at a store that served us some plain ramen noodles. At least they were cheap at 3000 kip, even if they were far from appetizing or filling after the 5 hours on the bicycle that we’d already completed. If only we’d known the real adventure was just ahead of us, we might have ordered a second helping. 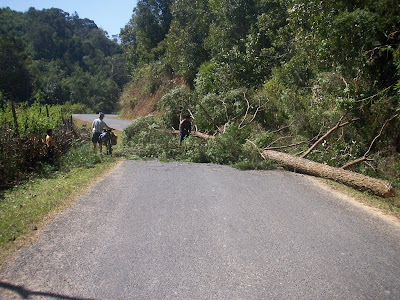 We’d read (thanks Lonely Planet), about a place called the Sin Huan Archeological Park, described as â€œbetter than it sounds,â€ which lay 6km off the main road. Compared to Stonehenge, and of the same time period as Phonsavan’s famous Plain of Jars, it sounded intriguing and worth a look. As we set off on our cycles, the dirt road quickly gave way to rock, gravel, and an insane uphill, and our interest turned to despair. Thankfully we were able to grab a ride from a passing truck, which took us the remaining 4km up the rutted, bouncy, and un-cyclable path, before dropping us off at the ruins. 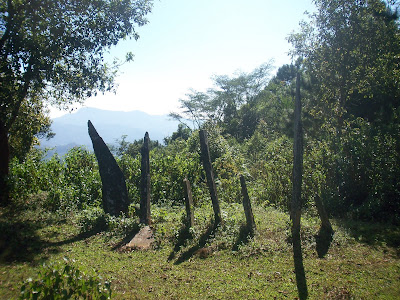 They were ruined, that’s for sure, just a bunch of rocks sticking un-impressively out of the ground, jutting out at random angles in small groups. 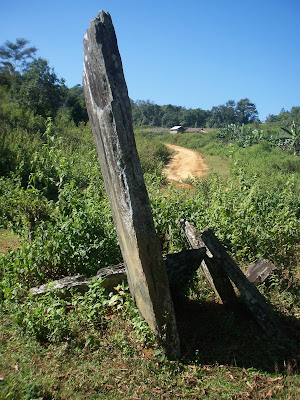 Even taking strategic photos couldn’t quite make them appear dazzling, and their close proximity to large circular burial ‘covers’ â€“ like large rock manholes â€“ did little too enliven the scene. A lost calf, mooing helplessly and too overcome by fear to let us get near it, proved more exciting, and almost more photogenic, than the stones left over from Laos’ distant past. We’re tolerant folks, but this was disappointing, and given the arduous journey it took to visit, quite a bit frustrated as well.

Fortunately luck was on our side, as approaching from the other side was a kindly English-speaking Laotian tourist, on a business trip with his wife but stopping by Sin Huan for a photo op. He gave us a ride back to the main road in the back of his pickup truck, ourselves and our bicycles both bouncing high the entire time, but at least we didn’t waste TOO much of our afternoon trudging along the awful red-dirt roads of rural Laos in search of some ancient excitement that was nowhere to be found. Apparently the sites have been nominated for World Heritage status, but if anyone at UNESCO is reading this (we’re sure most members are), there’s more exciting stuff out there in the world, we promise!
Back on the road, all was well for a few more hours, as the hills went up and down along with our gear shifting. Then, as afternoon turned to evening, a monster hill appeared, one that simply would not end. We even stopped for our fourth snack of the day â€“ Laughing Cow cheese, Larabars, and snack cakes are amazingly filling â€“ and yet the road would not stop twisting ever skyward. 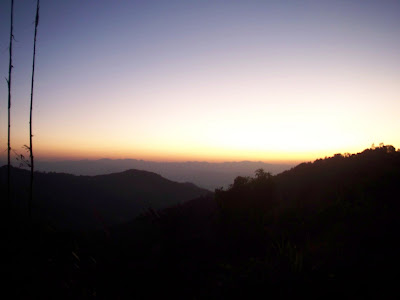 Finally we reached the top, as sunset turned the mountaintops crimson red, which meant we (once again) had to dutifully don our headlamps for a downhill wasted by darkness. Twelve kilometers later, after a stop in a village for water and to verify that the road actually kept going downwards, we finally ended up in Nam Neun, but what should have taken 15 minutes in the light ended up taking almost 45 as we had to grip our brakes tightly out of fear of going off of the road. But at least we made it, intact, our friends had a room ready for us, and unlike their dinner ours was actually delicious. Grilled boar meat, fresh foe (as in pho of Vietnamese fame), plus a warm milk carton filled us up right, in time to get back to our hotel with a few minutes to spare before they turned the generator off for the night.
Now we’re in Phonsavan, to get here we opted to take a four hour songthaew ride instead of spend two hours cycling through even more relentless hills. So we sped over the mountains, while occasionally choking on exhaust fumes, to a more tourist-friendly town, or at least strip of hotels, restaurants, and shops. Yesterday, after eating some shoddy pizza, we watched a pair of documentaries about UXO and MAG â€“ unexploded ordinance (as in bombs dropped by the USA during the secret war in Laos) and a fantastic charity respectively â€“ before eating more food, drinking more Beer Lao, and then heading off to bed. 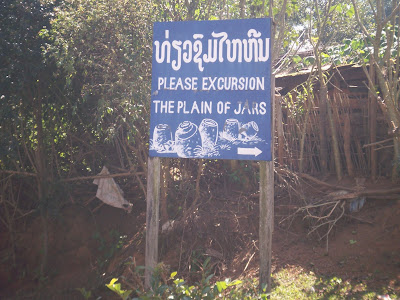 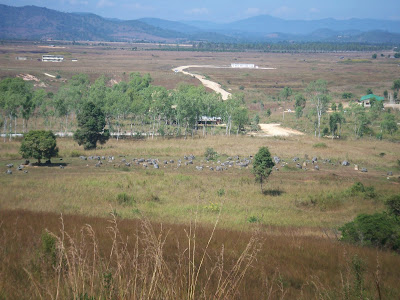 Today we cycled about 50km, on mostly flat ground â€“ although plenty of that was on dusty dirt roads â€“ and without any of our baggage, which was relatively easy and fun since it was interspersed with cool archeological remains of the large stone jar variety. 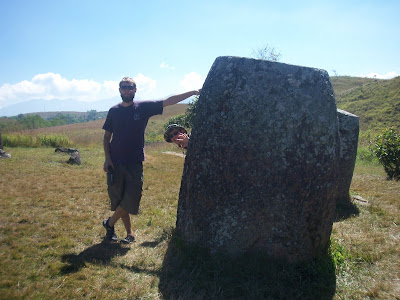 We saw two of the three major Plain of Jars sites, one can really only stare at so many large stone jars before redundancy and non-appreciation set in, both of which were pretty spectacular. 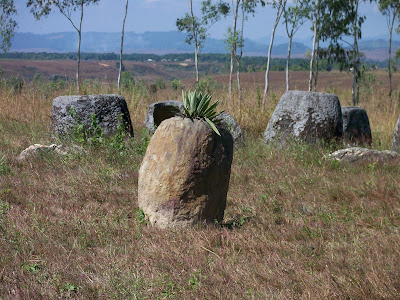 The origins and purpose of the massive containers, mostly intact despite a war being fought on the same plain in the 1970s, are essentially unknown. 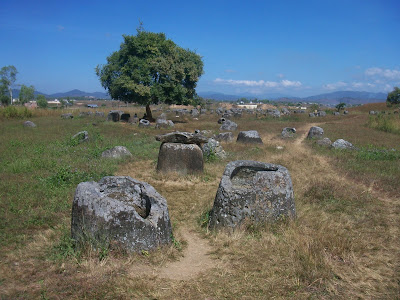 Maybe they were funerary, or perhaps storage containers for either rice wine (lao lao) or water for travelers along an ancient trade route. 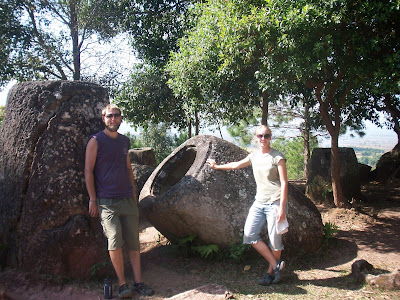 We just got back from eating some amazing, and amazingly spicy, Indian food, so the rest of the night will be spent relaxing in various forms before hitting the road again tomorrow morning. Currently we’re relaxing in almost total darkness since the power has been out all day, but supposedly that situation should be changing in the near future…

Here’s a moment of zen courtesy of Luke: 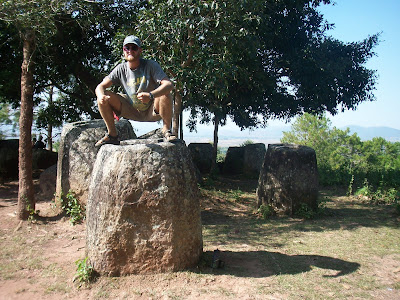 And another from some rural Laotian women:

One Response to From Sam Neua to Phonsavan, Sin Huan Archeological Park, Plain of Jars