February’s struck, as January’s disappeared all too quickly… this means our days in Wisconsin are almost finished, since we’ll be leaving here this coming Thursday. We’re taking the slow (but fun) route home in order to visit a bunch of friends in the MidWest. Our tour will take us through Milwaukee, Chicago, Iowa City, Des Moines and Omaha before we arrive back in Denver just after Valentine’s Day. So be on the lookout for some wandering Muths in your neighborhood soon!
This past weekend we went to an indoor water park with Liz’s brother and his girlfriend, as well as a bunch of kids of all ages, which was a nice break from the cold and snow. We thought we were only going to have to endure two snowstorms while we were here, but it’s been snowing for the last 12 hours or so unfortunately… 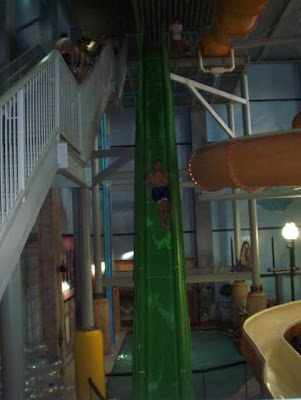 We also took a day-trip up to Gordon, a small town where Liz’s paternal great-grandfather built the Y-Go-By Bar. We went with both her grandparents, ran into a few other Peets (there’s even a Peet Drive a road or two over), took advantage of the dollar beers, and had a grand time drinking the afternoon away: 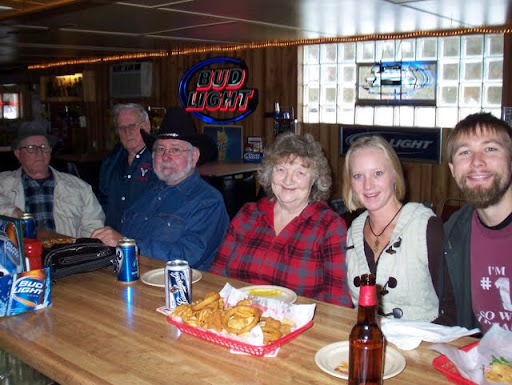 We’ve both been focusing on our online education over the past few weeks, with Anderson having just completed his TEFL certificate a few days ago, and Liz about to finish her first class (of five) for her Personal Trainer certificate. Online work is much more flexible than being in the classroom, but it’s still quite demanding, time-consuming, and challenging, but thankfully very informative as well.
Our future is still completely up in the air, since we have applied and had a phone interview for the summer resort jobs we want in Alaska, so now we are just waiting to hear back if we’ve made it to the next round of the hiring process. Regardless of that, we plan on going to South America to travel and teach ESL at some point during 2010, the question is just if it will be late spring/early summer, or not until the late fall. We’re aiming to find some semblance of regular employment while out in Colorado, so if you know of something let us know!
There’s also a couple of online updates: Anderson’s latest TravelFish article is available HERE called Tubing in the Vang Vieng. It’s all about one of SE Asia’s biggest – and certainly Laos’ only – party spots!
The SE Asian Adventure movie is now streaming: