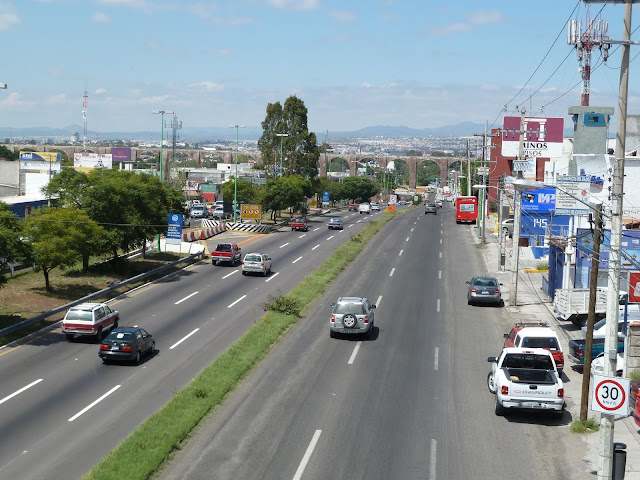 View Of Queretaro, And Los Arcos, From Near Our School 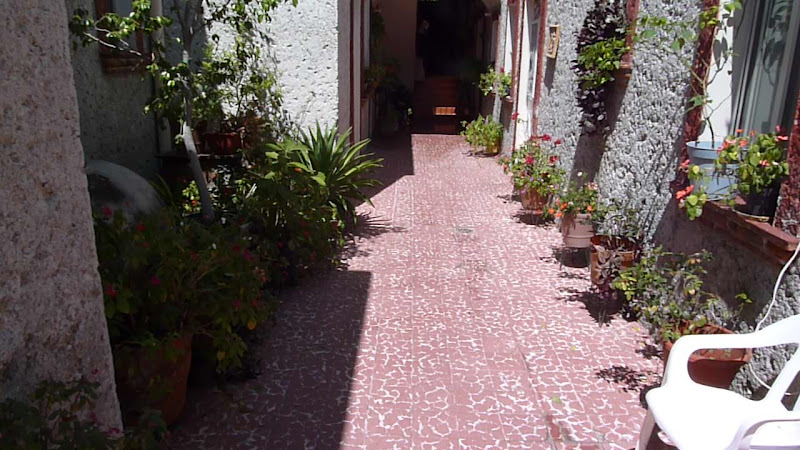 The Open-Air Courtyard Just Outside Our Room

Been a busy first week of TEFL-ing here, definitely a shock to the system in some ways!Â  That having been said, the course itself is fantastic, surprisingly devoid of busywork, and we’re learning loads of information about how to be more effective teachers.Â  Keeping all that information in our brains may be a bit more difficult, but at least we are taking copious notes!
We’ve gone over methodology aplenty, taught our first practice class, begun our first project (interview/assess a language learner and then teach them a “practice” lesson), and today we dove into the murky waters of phonology.Â  Our students, whom we will teach a total of six times, are indigenous Mexican teenagers who are sponsored by a charity group.Â  That means their families all live in the mountains outside of Queretaro, so the nine months of English classes that they’ve had so far has (mostly) been their only experience with the language.Â  Adjusting our teaching style to Spanish-speakers will definitely be an ongoing process, however they have thus far responded positively to our view of them as “older children” rather than “younger adults.”Â  Making class fun, with varied activities, seems to make the grammar and repetition much more tolerable.Â  While no day in itself is terrible, we do have a heavy load of schoolwork, for example this week there’s a lesson plan (and subsequent class to teach) for Tuesday, then a project (1000+ word paper) due Wednesday, and then another lesson plan and class for Thursday… being a student of English teaching, though perhaps easier to comprehend in some ways than learning Spanish, is definitely more time-consuming and challenging!
Our instructor, Mark, keeps things light-hearted yet professional, a difficult balance for any teacher, so while class requires intense thought at times we’re never put on the spot too directly, or expected to have all the answers – in fact, we are quickly re-discovering that teaching is much more of an art-form than a science.Â  There’s a definite focus on keeping the students as the priority, which translates to putting subtle pressure on them to be doing the work (rather than teacher-led lecturing), but that also requires us to be dynamic and inventive with our activities and lessons.Â  But of course, we still have to use the primary textbook, its exercises, and its target grammar, vocabulary, and concepts.
Of course, we’re doing plenty of fun things outside of the classroom as well!Â  Mexican food continues to amaze, while we have found several fantastic places near our house, whenever we try somewhere new it too becomes a favorite. 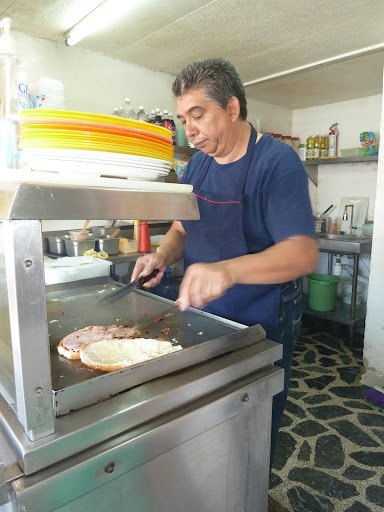 A Hawaiiana Mega-Torta On The Grill 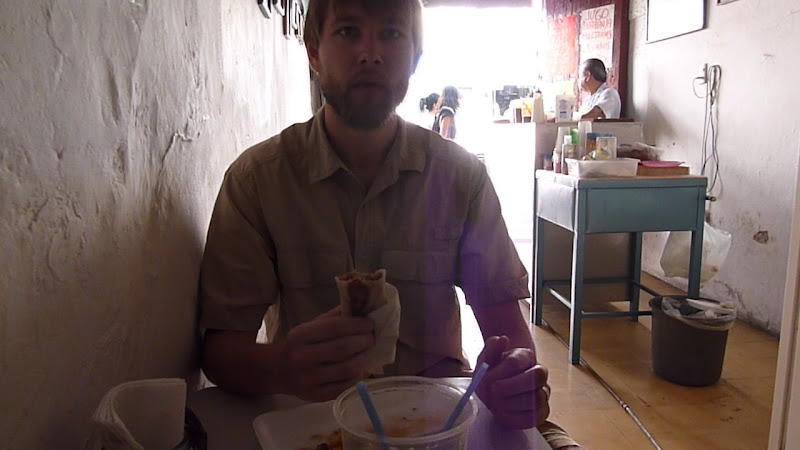 Burritos, tortas (sandwiches), tacos, chiliquiles (nachos), and gusanos (super burritos) make up most of our diet, although we often have set meals for lunch (comida corrida). 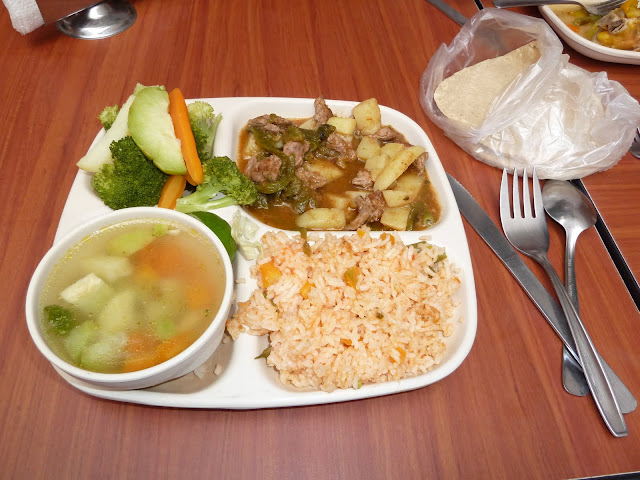 Breakfast is made by our host, Adan, and while it always includes coffee, fresh fruit, and tortillas, there’s a lot of variety for the main dish.Â  Huevos rancheros are common, as are cheese quesadillas and chiliquiles (yes, nachos for breakfast, with sour cream to drizzle on top), and one morning we even had some tamales, with salsa rojo or verde cooked in. 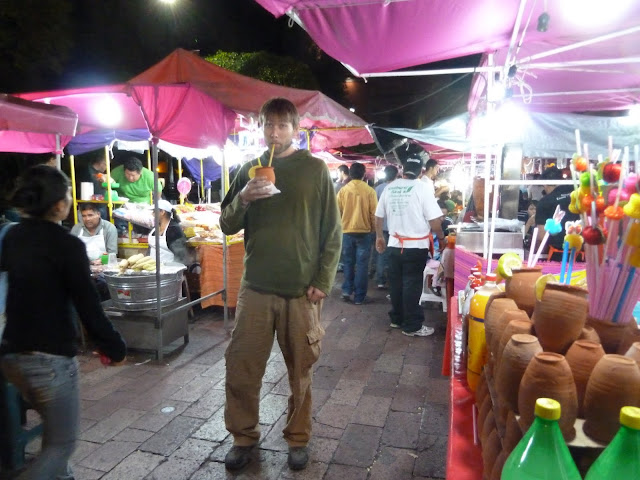 During the week we often wander about the Centro Historico, which inevitably means hearing some live music of some sort, plus plenty of people watching, although most of the time our evenings are pretty short since we have class until 5 or 6pm.Â  Our weekend was pretty jam-packed: Friday night we went to a local club for a bass-heavy reggae/dub/afrobeat/hip-hop show, featuring one Mexican and two French DJs, before the headliners, a drum-n-bass-n-more DJ and MC duo played until well past 2am.Â  The party kept going as the promoter (from France) then came on to DJ, but we had to bow out before things were done right around 3am.
Saturday we went to the local market, Mercado de La Cruz, buying a bunch of cheap snack foods and some futbol jerseys… the jerseys quickly came in handy as we went with a few friends (our housemate Tamir, our classmate Bill, and Bill’s wife Sue Ellen who came to visit for the weekend) to see the local professional soccer team, the Queretaro Gallos Blancos.Â  They were playing against a top rival, Chivas (from neighboring Guadalajara state), which meant the crowd was an enthusiastic mix of fans. 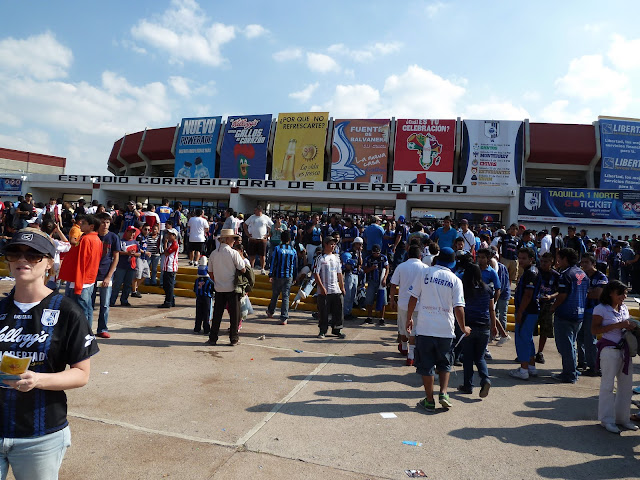 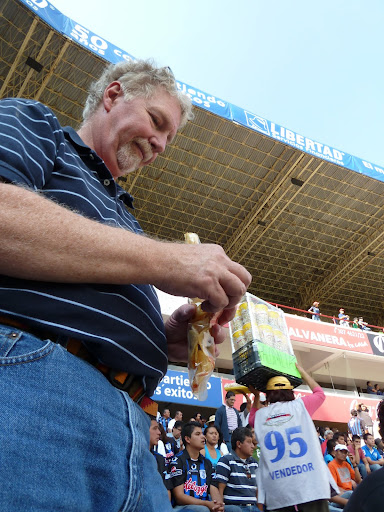 As the game went back and forth, the Queretaro aficionados never once stopped chanting or banging their drums, but in the end all we could muster was a 2-2 tie. 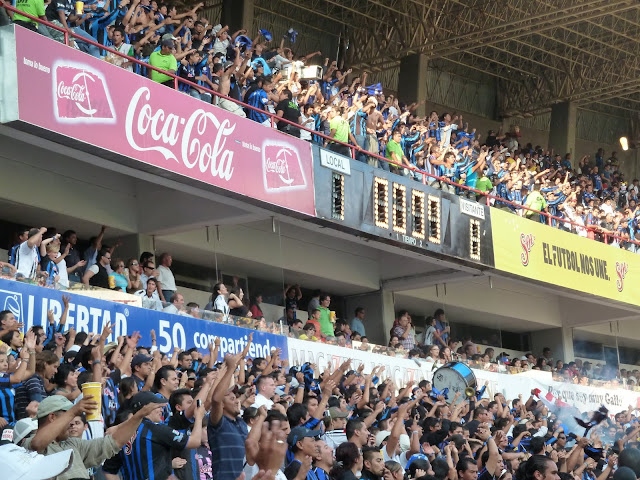 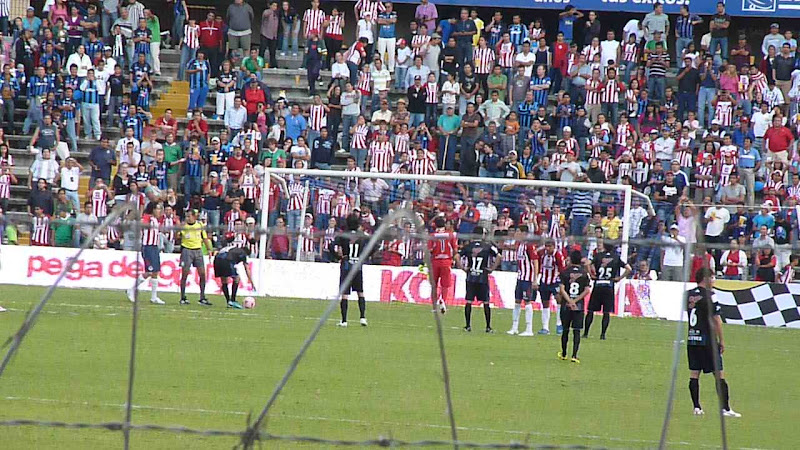 A good result against a traditionally tough team, except that currently they are both at the bottom of the rankings, 14th and 15th respectively.Â  The season’s just begun, thankfully, and we’ll hopefully get to go see them play again in two weeks.Â  We went out for a fancy dinner, trying Oaxacan cuisine (another neighboring state) at a nice restaurant near the city center, also know for it’s high-quality Mescal drinks and an elaborate ritual: 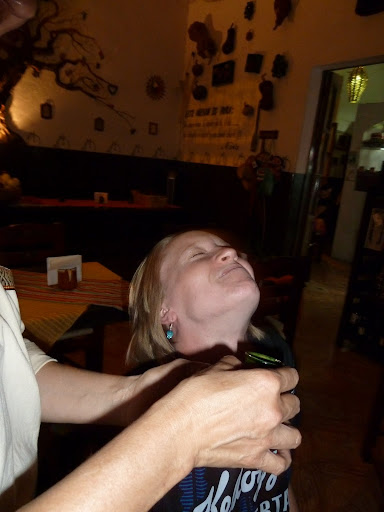 Yep, A Shot Of Mezcal Before Our Mezcal Drink 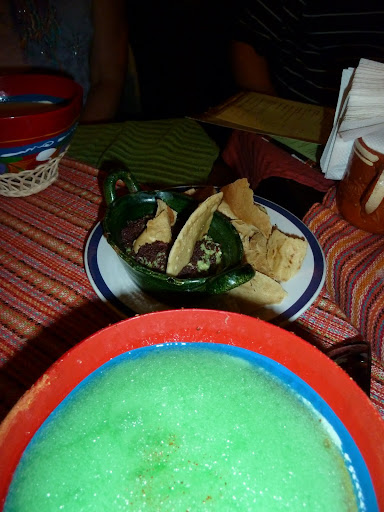 Oaxacan Cuisine: A Mezcal Drink In A Bowl & Guacamole With Ground Fried Crickets

Sunday we all decided to run, unregistered, in a local 5.4km race, since both Tamir and Sue Ellen are runners.Â  We, as you may know, aren’t, but it seemed like a fun challenge and we are definitely in need of more exercise!Â  Given that Anderson hasn’t run competitively since 6th grade, and Liz has never done an organized race, our times of 28 minutes and 39 minutes weren’t too shabby at all! Liz was certainly grateful for Sue Ellen’s motivational and conversational support throughout the race!Â  Afterward we went out for a delicious lunch buffet, in Plaza de Armas in the Centro Historico – thanks Bill! 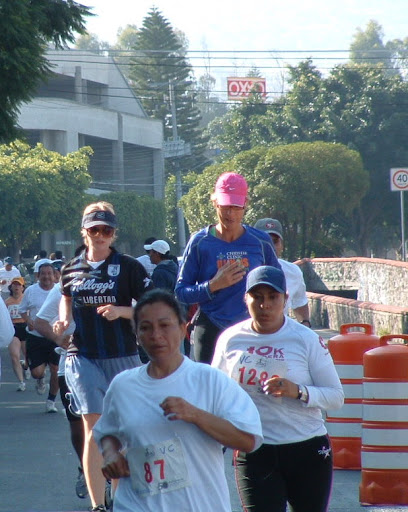 The remainder of Sunday was spent in various stages of semi-relaxation, as we got an enormous amount of laundry washed (that’s how we really know we’re back to traveling, washing piles of dirty clothes by hand on the bathroom floor), played some Carcassone, worked a bit on our lesson plans and assessment projects, and watching a bit of downloaded American TV.Â  Right now we’re keeping up on The Amazing Race, Project Runway, Weeds, and Chuck.Â  There’s a bit of drama going on in all of them… 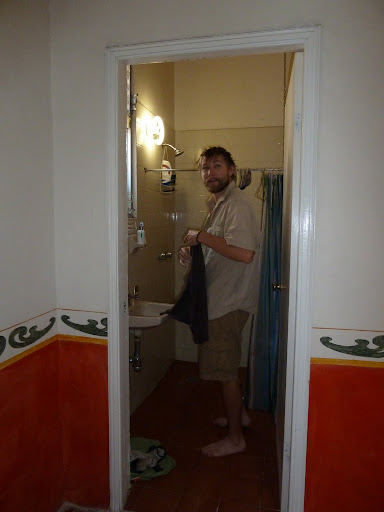 Just Getting Started On The Laundry

For dinner we found a new (to us) taco cart a few blocks away, serving up delicious food for super cheap (7 pesos each), which is great because our local late-night taco cart, while being really, really good, is also rather expensive (smaller/less-filled tacos are 10 pesos).Â  Not counting pesos quite yet, but why pay more for similar food… we’ve got plenty of time but not plenty of money. 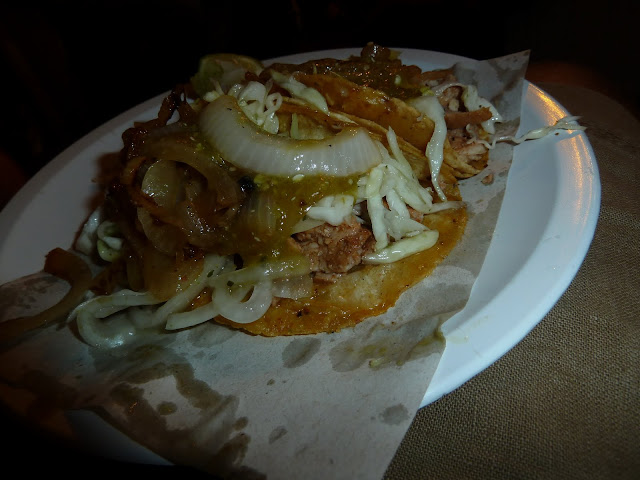 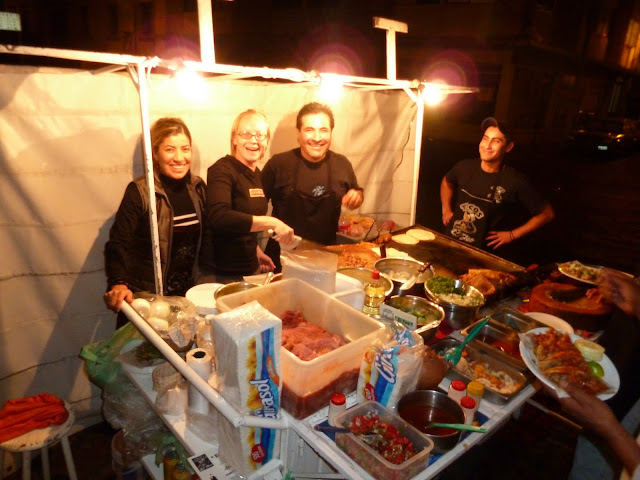 Liz Amidst The Smiling Taco Aficionados

Tonight we’re doing more homework, Anderson’s just finished his lesson plan for tomorrow while Liz is still working on hers for Wednesday, but we’ve got a few more hours of consciousness tonight since we don’t have class until 10:30 in the morning,

Hope you like the new website, plenty more updates and such to come, although most of them may not occur until we’re done getting our TEFL certificates,

And now for your moment of zen, con permisso, our dog Boss: 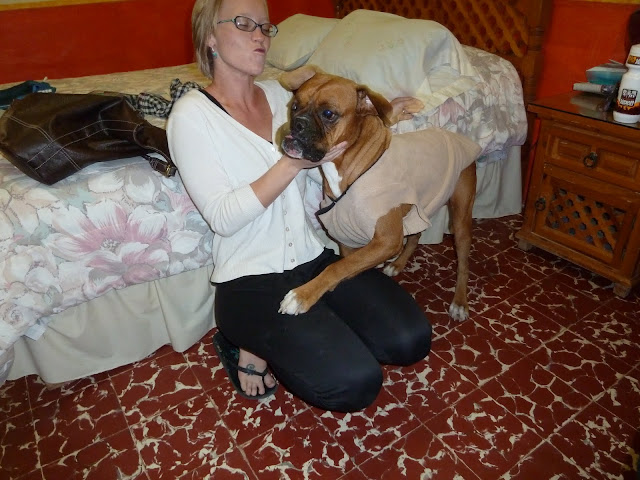 "Our" Dog Boss Shows Off His Stylish Cold-Weather Wear