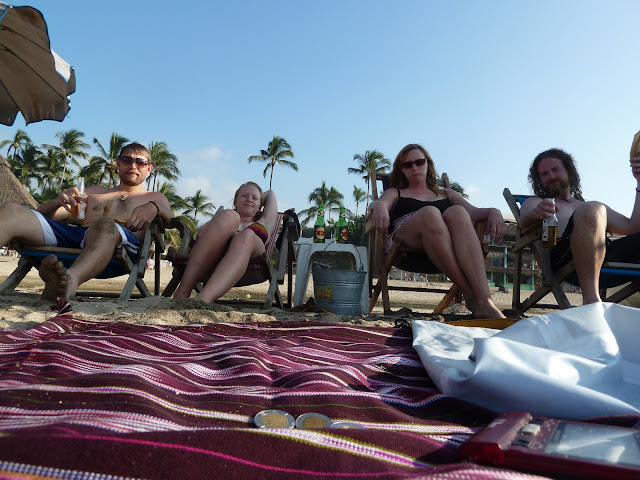 We’ve made it! From Queretaro to Sayulita, only a two-part overnight bus-trip apart, we’re now staring out at the beach from our quasi-bungalow: half condo, half bungalow… must be a condolow. We met Scott and Joni at the Puerto Vallarta airport Saturday afternoon, after accidentally riding the public bus throughout the city for about 45 minutes, but at least that meant we got to see the city before gladly fleeing to the beach.
We had a tasty fish taco meal, something that’s already become quite the culinary trend for us, before riding another public bus up the coast to Sayulita. Meandering about on the edge of town, we immediately found a sports bar (showing the Iowa beat-down over Michigan State), where we got the low-down on where to stay and what to do.
Hence why we’re right down by the beach, having thoroughly enjoyed Halloween yesterday, ready for another day of sun and fun. Sayulita’s not the perfect beach-town, though it’s hard to tell how much of the scattered wreckage is really left over from the massive storm 6 weeks ago – that succeeded in reshaping the beach – and how much of the trash and mess is a constant feature of this artificial tourist environment. In case you were concerned for our well-being: the beers are ice-cold, the seafood fresh and contained within everything, the waves reliably surfable all afternoon long, the park has nightly live music, and there’s even an affordable hookah bar… we definitely can’t complain, though we probably won’t be purchasing property in Sayulita anytime soon. Things are a bit rough around the edges and a little pricier than we’d prefer, but we’re at the beach having a great time – no room for complaints whatsoever. There’s plenty of dogs, both collared and not, though our most impressive animal encounter was with an enormous wild iguana yesterday afternoon.

We’ll have a complete write-up on Teacher Training Center soon, but we finished up our time in Queretaro just as we’d hoped – graduating from the course with distinction! It felt great to accomplish our goal, though we did so by a bit slimmer of margins than we’d initially anticipated. We felt more than a bit sad to leave Queretaro, not only did we enjoy our program and our homestay, but we’d made some great friends and still had plenty more exploring to do, since in reality our course was so time-consuming we didn’t have as much free-time as we assumed we would. But we did finally see the Gallos Blancos win a futbol game (1-0 over Estudiantes), we’re now thoroughly in love with both Mexico and Mexican food, and it obviously felt great to teach our last class for a while… being critiqued as a teacher constantly is a bit of an exhausting process.

We’ll be here in Sayulita until Wednesday, when Scott and Joni return to Los Estados Unidos, at which point we’ll begin our multi-bus journey across the width of Mexico. We’re planning on going to Oaxaca, via Mexico City Norte, and spending a few days there enjoying the food and seeing some ruined temples. Next stop will be Palenque (more ancient temples), and then we’ll cross over into Belize by then 10th of November. We want to see a bit more of Mexico’s variety (as tempting as holing up at the beach may be), since there’s much more to Mexico than just cities and beaches.

More news when the time presents itself… plus photos we promise!