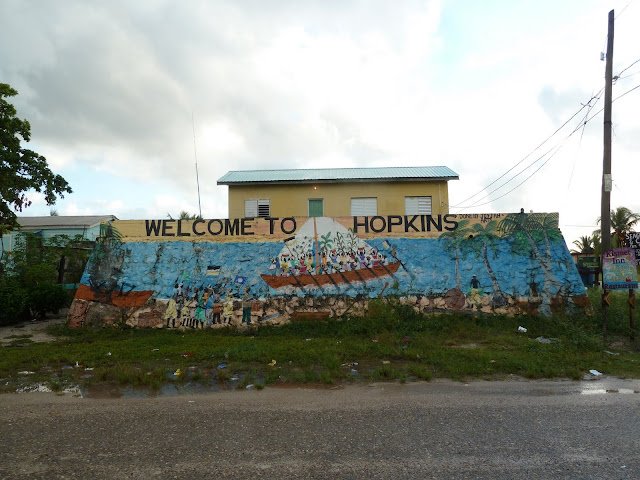 We’ve spent a lot of time in transit, a lot of time relaxing, and a lot of time exploring.Â  Keeping busy now that we’re back to being travelers!Â  Our last few days in Belize were fun, despite the rain (which initially just disrupted the satellite internet due to cloud-cover before knocking the power out several times), as we explored Hopkins more, enjoyed some of the Settlement Day festivities, and took a road trip down to Placencia on our final day.Â  Placencia was pretty cool, since it’s a long, very thin peninsula you can often see the ocean on either side during the drive down to the end.Â  We walked around a bit, did a little shopping (it was touristy while Hopkins is not), enjoyed the return of the sunshine, and had some delicious lobster burritos as our final Belizean meal.

Early the next morning we got a ride to the bus station, but once the 7am hadn’t shown up for about 45 minutes we wisely caught a ride out to the main highway.Â  Our day of travel started out well, our ride helped us overtake a bus to Belmopan, which took about 1.5 hours.Â  In Belmopan our bus to the border was just about to pull out, so we quickly transfered our bags, squeezed in a bathroom break, and made our way to Guatemala.Â  Customs was hassle-free, though changing money and finding a collectivo was not.Â  Men were all about with stacks of currency, and the bus tout was far from helpful, but we eventually made our way to the local bus stop, piled into a van, and got a ride to Santa Elena.Â  That’s the mainland town directly across from Flores, a small beautiful island in the middle of the massive Lake Peten Itza.Â  We rode a tuk-tuk onto the island, hit up a much-needed ATM, and then found a hotel with a nice rooftop view of the water! 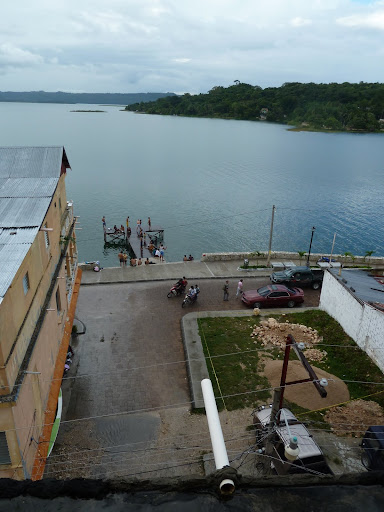 Nice View of the Lake and the Swimming Dock

Flores is a tourist town but it’s not yet the full-blown tourist season, so many places are closed and everywhere has a pretty relaxed vibe.Â  The power was out when we arrived, but after a couple of failed restarts it’s been on pretty consistently since.Â  Which is great, because we really need the high-powered fan blowing on us in our hotel room!Â  Food here is great, still need to try the local fish, but we’ve had plenty of great cart-food from vendors that set up at night along the waterfront.Â  Tacos, flautas, and tostadas have all been great, plus we’ve had some delicious banana desserts (cinnamon-sugar coated, bread, chocolate-dipped and frozen, and fried with ice cream and cinnamon).

Flores is one of several towns that serve as hubs for visits to Tikal, the massive Mayan ruins buried out in the jungle that keep the tourists coming.Â  Quite rightfully so as we discovered, but we took our first day in Flores to relax, go swimming in the lake – nice dock right off the street in front of our hotel, and wandering about.Â  That meant that yesterday was Tikal Tuesday! 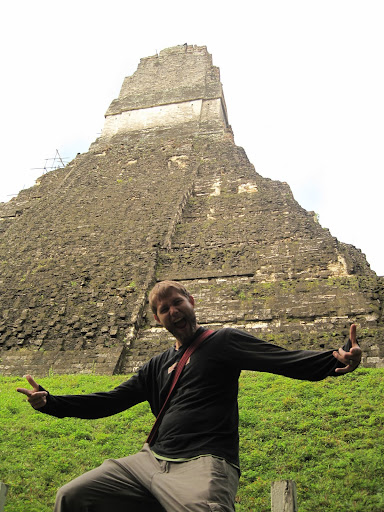 It Really Was That Awesome

We arose at 4am, met our van at 4.30, and were at Tikal around 6am.Â  Mist canceled out any chances of a spectacular sunrise, but we wandered through the jungle, seeing and hearing animals, before having our minds blown by the temple complex itself.Â  We were on a guided tour, which was nice since we learned a lot about Tikal, the Mayans, the flora and fauna, and plenty more, but we were still given ample time to explore on our own plus we often wandered behind the group to see more of the ruins.Â  As for animals we saw plenty, all sorts of birds, spider and howler monkeys (heard the latter much of our time in the park), wild turkeys, and several coatimundis, a relative of the raccoon. 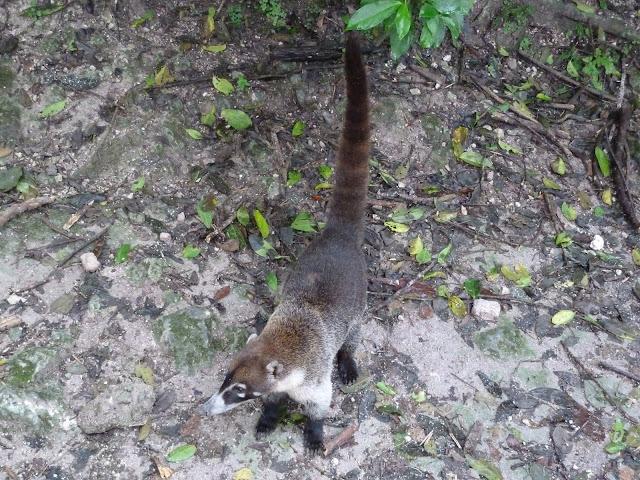 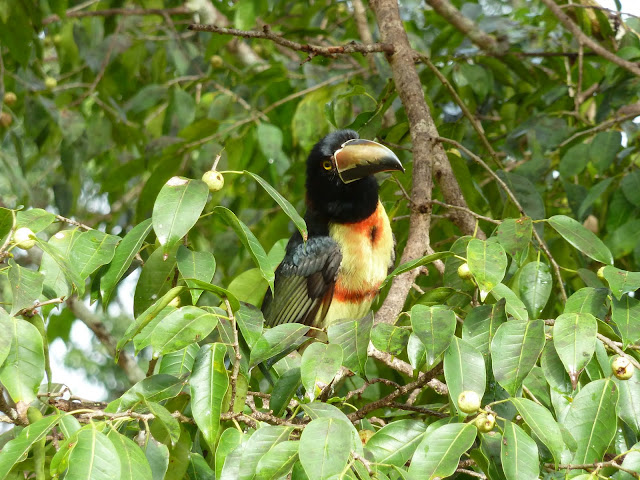 Tikal is sprawling, and only 15% of it has been unearthed, so everywhere we walked were additional temples still buried under hills of vegetation.Â  Known for the heights of its looming towers, Tikal delivered with views through and above the jungle canopy. 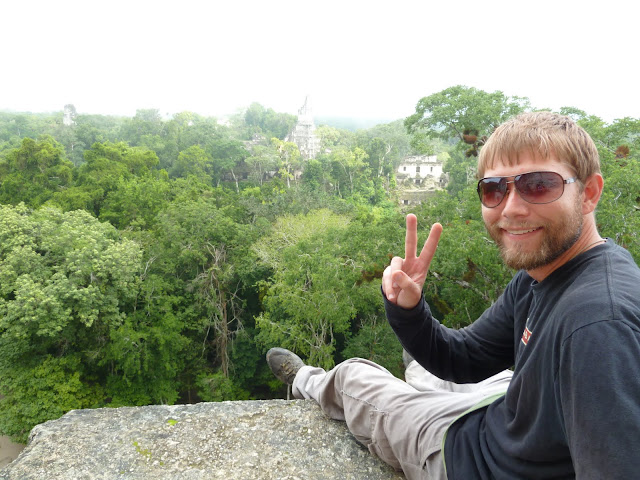 On Top Of A Templo 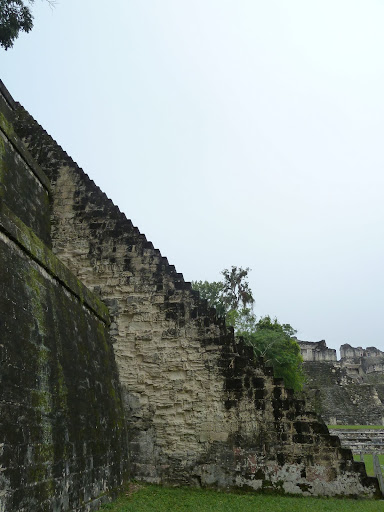 Steep wooden ladders led to open platforms looking out like man-made vistas, serene views emerging as the sun slowly burnt off the mist. 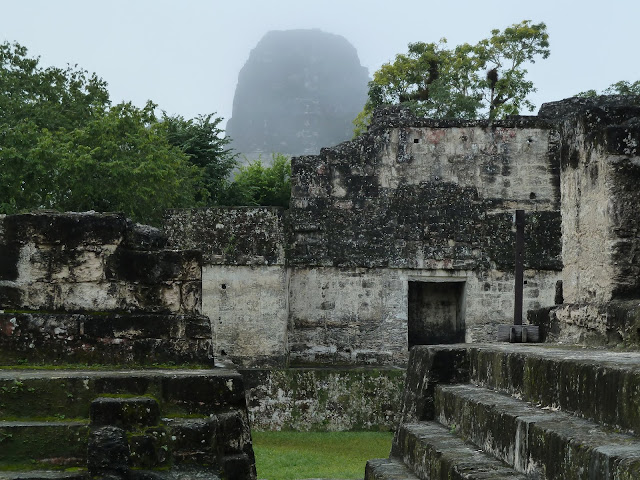 Looming In The Midst

We walked a lot, and were consistently rewarded… definitely the best temple complex we’ve seen yet, due to both the size and style of the buildings and also the natural setting – hard to remember that in Mayan times the jungle would have been completely cleared, the buildings painted in bright natural colors, thousands of people would have been living and working all around the major uncovered sights, and roads would have led in all directions (astrologically influenced) to other parts of the empire. 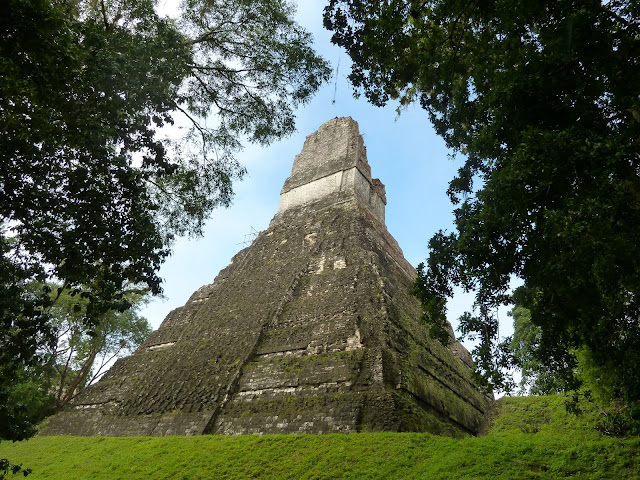 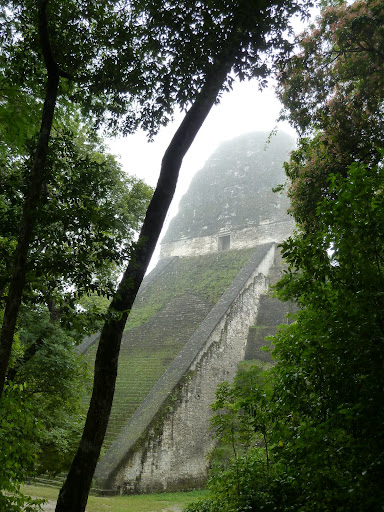 Major Mayan cities were laid-out according to the four equinoxes, set at 45 and 90 degree angles from one another, connected by the rays of the sun on the holiest days of the year. Definitely a different world than the relatively sparse remnants available for the modern tourist. 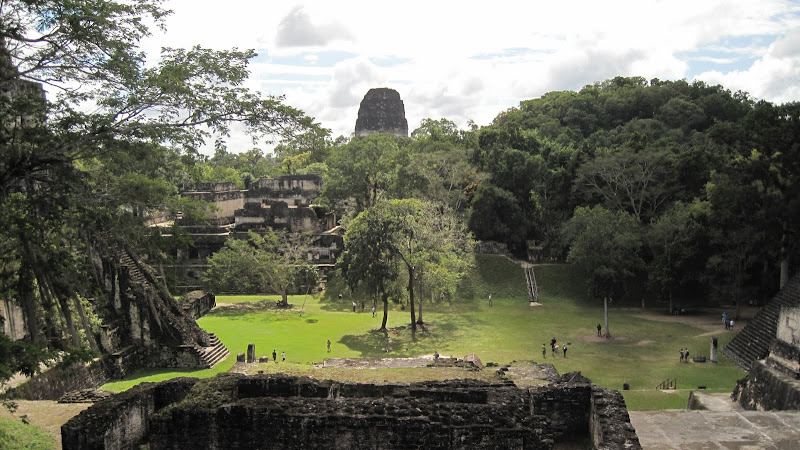 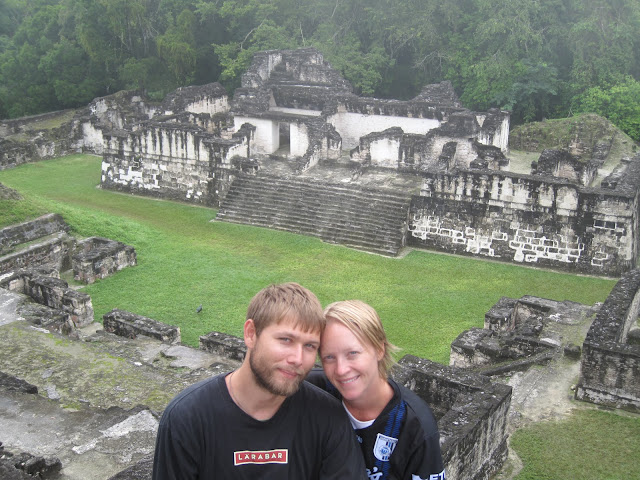 Just Us & Some Ruins

After a much-needed nap we went on a shorter hike with a nice guide that we met, checking out some very small local ruins, with only the barest of evidence available on the surface, before going to an amazing lookout point. 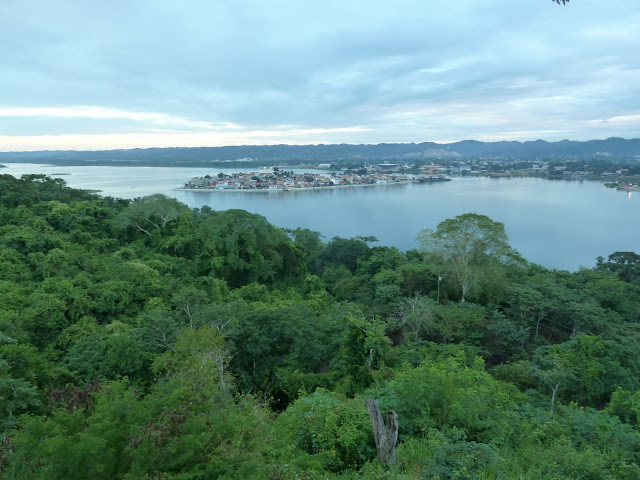 From a two-story tree-house we enjoyed the sunset over Flores before the short boat ride back to the island. 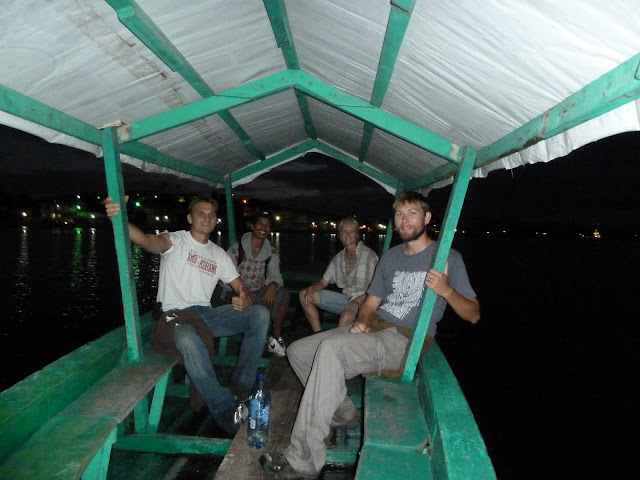 More lakeside tacos ensued, a nightly ritual with almost a dozen vendors out on the waterfront.Â  We plan on one more day here in town before heading south to Sumac Champey, a town known for caves and a river-float that at dusk becomes a bat-observation-float.Â  Liz went there her last time in Guatemala, so we know it’s worth the hype…

We’ve gotten more than a bit behind on posting these, but Reannon has written many more articles as part of her RumBum travel series about India and Nepal:

#5: High In The Himalayas

#7: Trouble at the Top of the World

#9: Trouble on the Train

Most of those feature photos by Anderson, and all are about our collective adventures, the current articles cover our time in Ladakh.

Anderson has also finished a new mix under a new moniker:
Dub Steppin’ Mini-Mix by Groovethief

Time to relax before yet another bus ride tomorrow,