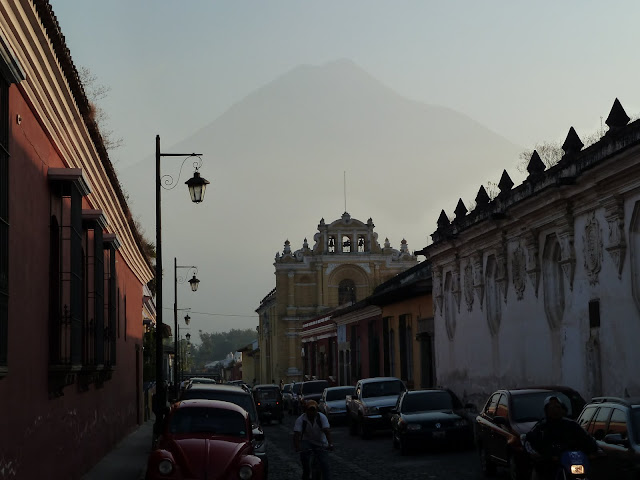 Volcan de Agua Looms Over The Streets Of Antigua

Our adventure is continuing in Guatemala, and we’re currently settled (though just temporarily) in Antigua.Â  Right now we’re all taking a week of Spanish lessons, through an all-inclusive (room, board, water, wi-fi) language school, getting all that plus 20 hours of one-on-one instruction for only $125/person.Â  We all have good teachers, and are learning enough that our brains are practically bursting.Â  A large batch of flash cards to help us remember all the new vocabulary is definitely in order!
We spent two nights on our way from Flores to Antigua, the first in a rustic jungle-set treehouse-esque hotel a few kilometers outside of Semuc Champey.Â  Definitely our roughest night yet, though the experience the next day was undoubtedly well worth it.Â  We managed to catch rides in and out of the site itself, which was pretty crucial since the walk would’ve been lengthy on a rugged dirt-track road, but that also meant we had the energy on arrival to first go up to a high viewpoint overlooking the amazing pools of turquoise water beneath it: 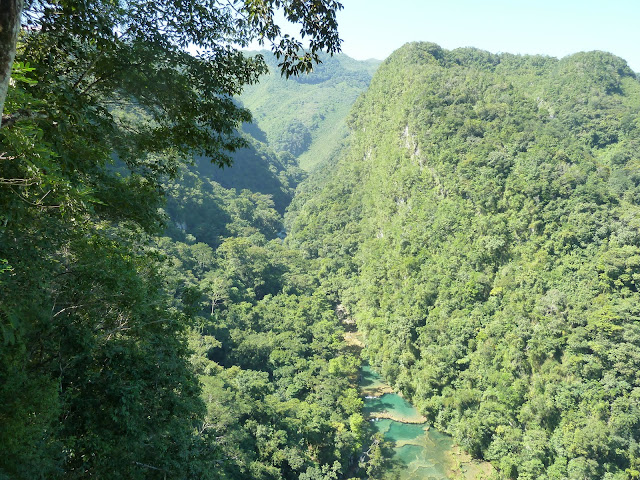 Semuc Champey Is Set Deep In A Valley 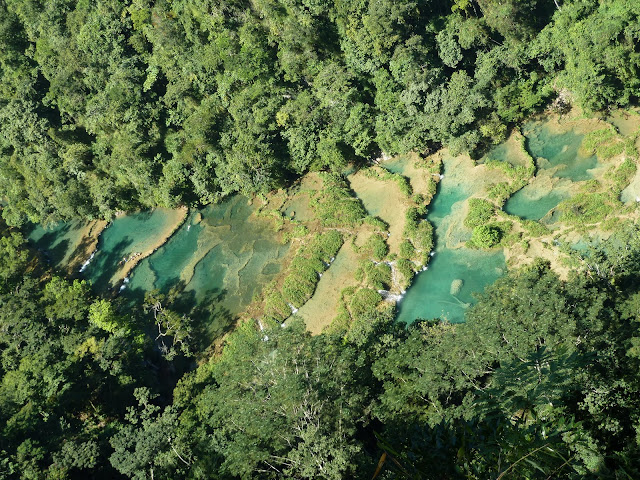 The Pools Cascade Down

Continuing down to Semuc Champey itself (a natural limestone bridge full of gorgeous pools with a raging river running beneath it), we jumped and dove into pools, and swam/walked through the whole series of them before reaching the endpoint where the river re-emerges). 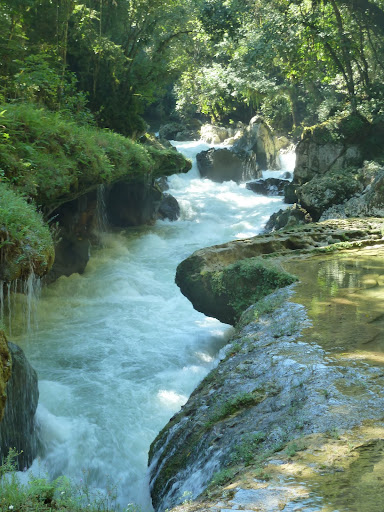 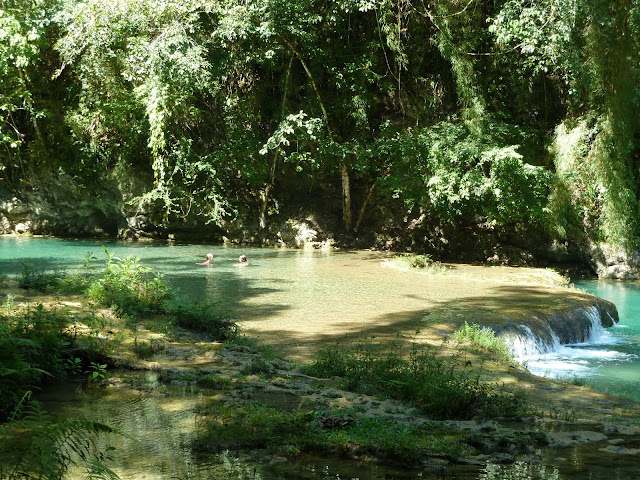 The water felt great, the setting was magical, and though there were a decent number of tourists there most weren’t there to go swimming apparently so we mostly had the water to ourselves.Â  Getting back to our hotel, we packed up and waited for a promised ride back into the town of Lanquin, but when that didn’t materialize on time we caught another ride on the road, from a friendly American family, who took us the 8km through the rough hills.Â  We found a hotel quickly, and then set off for the area’s other key attraction, the Lanquin Caves. 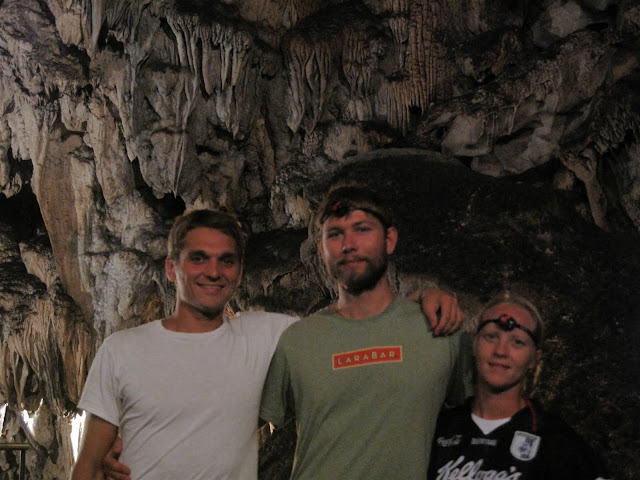 Promoting Products In A Cave...

Massive caverns, only partially lit up, they contain a ridiculous number of stalactites and other formations.Â  We got to wander through completely by ourselves before the tour groups arrived in time for the main event: the nightly departure of countless bats. 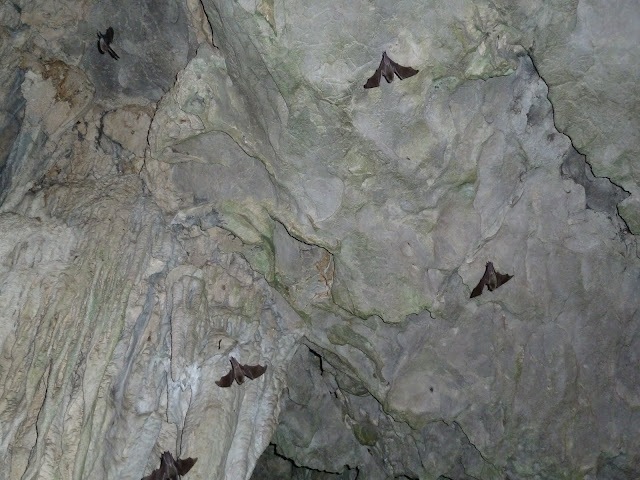 Bats Flew Just Beneath The Ceiling

It was pretty amazing to see some many bats in action, ready for their usual feeding frenzy.Â  A nice ending to a busy day of touristing, and we’re deeply appreciative for the three kindly people who stopped to give us rides!

The next day we missed the direct tourist van by 15 minutes, totally our fault for not getting tickets the night before, but that did mean our trip was broken up by multiple modes of transportation, rather than being just one excruciatingly long cramped mini-van ride.Â  Nine hours, one mini-van, one coach-bus, one tuk-tuk ride, and one chicken-bus ride later we finally arrived in Antigua.
We’ll spare you all the details of the debate, but we’ve decided that while we like Antigua, and have really been enjoying Guatemala, that rather than remain here for a while and study/teach, we’re going to revert back to our original plan (which is what we always seem to do…) and head down to Peru in the very near future.Â  We plan on continuing our Spanish studies there, but this way we have more time to set up an actual life rather than continue to live betwixt and between.Â  We bought our plane tickets today, so we’ll be flying to Lima from Guatemala City on Monday, December 13th.Â  Quite exciting!
Otherwise we have one more day of Spanish lessons, and we’ve booked a trip to the Pacaya volcano for tomorrow, which should be pretty awesome since it’s still active so hopefully we can tempt fate and see some magma.Â  We’re planning on departing Antigua on Sunday, and we’re going to check out two more destinations during our time here in Guatemala: Lake Atitlan and Monterrico.

Thanks for reading as always,

PS – Reannon has another article out:

From a local futbol match, won by the home team over Lanquin 2-1, your moment of zen is Antigua’s mascot: 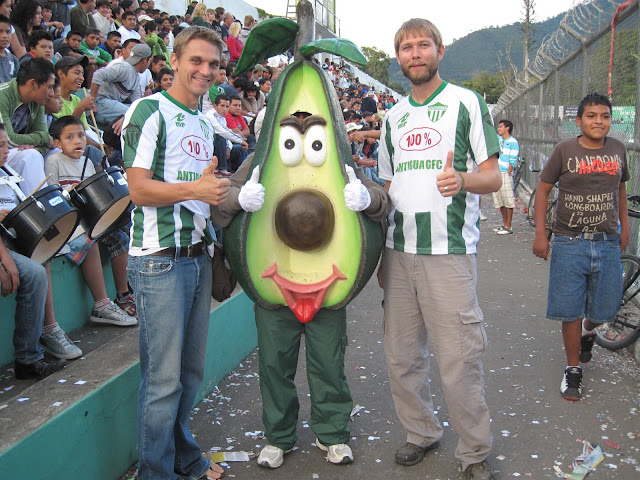