Down South In Peru: Lima, Trujillo

A bit of time has passed – our apologies, but we’ve made it safely to Peru and have been enjoying ourselves immensely!

We spent our last few days in Guatemala back in Antigua, staying with Liz’s former host family, before flying from Guatemala City to Lima Peru.Â  Both flights (via San Salvador) were on time, and we arrived for the first time in South America without any hassles.Â  We hadn’t booked a hostel, but we had written down the addresses of several within Miraflores, the happening district of Lima.Â  We found a more than reasonable place, and then spent the rest of the week exploring the city.Â  We saw most of the museums, some local mud-brick ruins, had a late night out dancing, and ate plenty of amazing food. 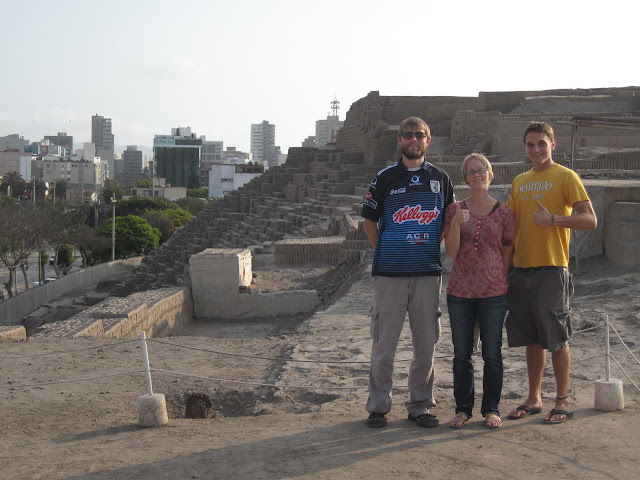 Lima’s an enormous sprawling city of nine million, so we took taxis, often for 20-25 minutes, to get to the different neighborhoods and sights.Â  Having three people kept it to about $1/person/ride. 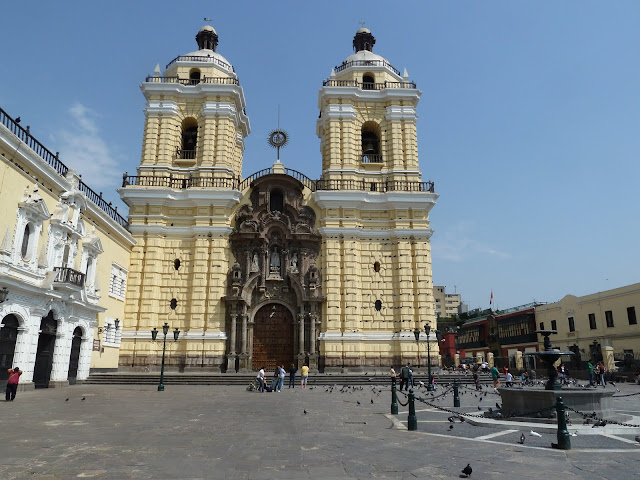 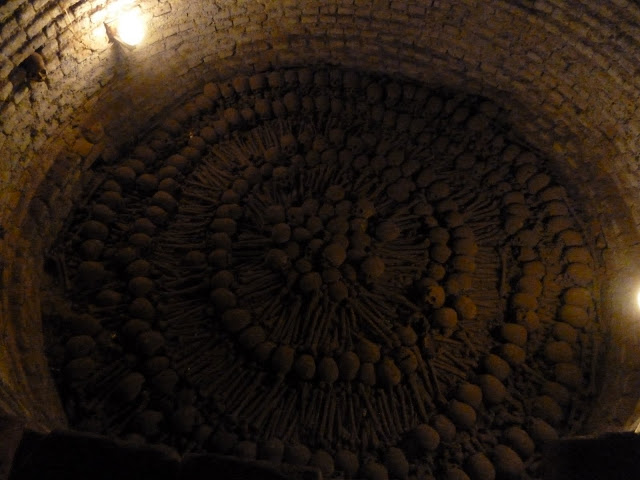 Bones In The Catacombs Beneath The Church

We walked throughout the historical center, checking out various museums, churches, and old buildings.Â  National Museum, Cathedral, Art Museum, Inquisition Museum, Archeology Museum – we touristed our best!
Plenty of interesting places, which we paired with spectacular food whenever possible. 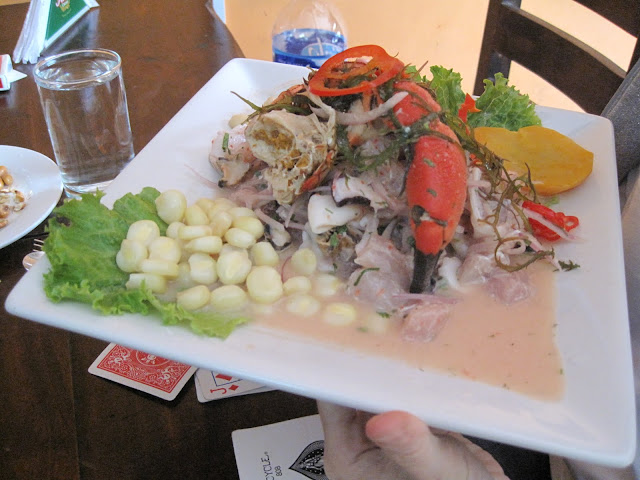 Peruvian cuisine is varied and fresh, with our favorites thus far being ceviche (raw fish or mixed seafood in a spiced lime sauce), shambar (a rich soup with rice, meat, and fresh meat), and saltado (somewhat like fajitas with meat pieces and thin hunks of vegetables, but in a different sauce served with rice and corn-off-the-cob).
We spent yesterday afternoon getting bus tickets, seeing another cool ruin, and then hacky-sacking in the Plaza De Armas here in Trujillo.Â  It’s a fun diversion and serves as a nice ice-breaker with locals, albeit usually semi-brave 15-year-old boys who can speak a bit of English! 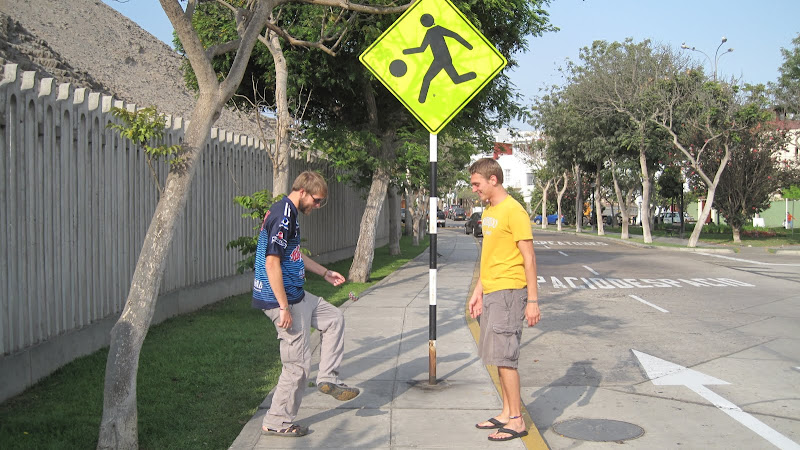 Getting Our Hack On In A Designated Location

We rode an eleven-hour bus here from Lima, and have spent the past few days exploring the town and the sights around it.Â  Chan Chan is the main attraction here, an ancient mud city endangered by changing weather patters.Â  While the walls were massive, most of the artwork and even much of the walls were recreations/restorations, which left a bit to be desired.Â  We did see another temple, as part of an alright bus tour, the so-called Rainbow Temple: 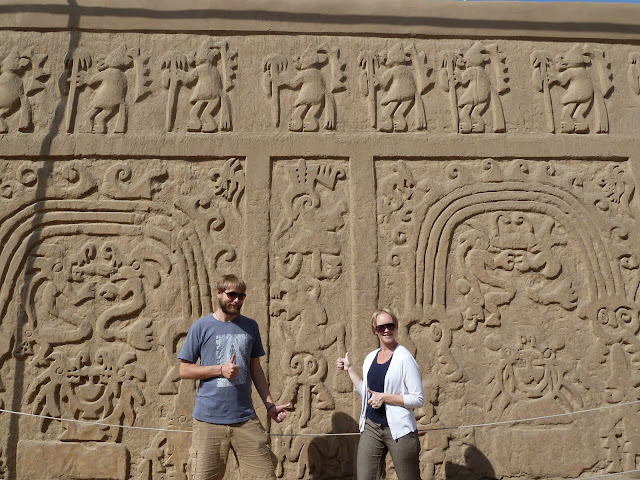 We’ve been hitting up guides and tours throughout Peru, in general they’ve been very affordable (free up to donation of about $5 total), mostly informative, and with the International Student ID cards we got with our airplane tickets (to get a cheaper rate) we’ve usually been saving more than that in admission.Â  That Trujillo tour also swung through the nearby beach town of Huanchaco, which despite the cold water seemed pretty nice – we tossed the frisbee around on the beach for a while…
Huaca de la Luna, yesterday’s spectacular temple, which we thought was much more interesting than the more famous Chan Chan, is still currently be excavated (by a 100-person archeological team we learned), but is where the capitol city of the _____ people was located between 800 – 1100 AD.Â  The site was still used afterward, and was partially looted by the Spanish, though now vast parts of the city are beneath the sand.Â  What has been uncovered is quite impressive, layered pyramids built on top of each, about half a dozen layers down.Â  Each layer was lived in and used ceremonially, to be then covered up by a future generation’s layer.Â  So the artwork and decorations buried below are in remarkable condition – once the filled-in layers of bricks have been removed – given that everything was built solely out of mud bricks.Â  Photos coming soon!
We’re heading back to Lima today, Trujillo has been nice but we’re eager (and financially motivated) to get to work in the near future, and we’re still feeling that Cusco is our best bet.Â  We know the holiday season is a busy time there, so we’re going to try and find out more information about what that really means so far as prices and hotel availability, because if it’s really going to be a hassle then we’ll wait a while and see another few places in Peru first… decisions, decisions.

If we don’t post again soon beforehand we hope everyone has a fantastic Christmas and holiday season – not sure yet where we’ll be but maybe we’ll make it “authentic” Peruvian Navidad and eat some coy, as in guinea pig…