Our Journey To Machu Picchu 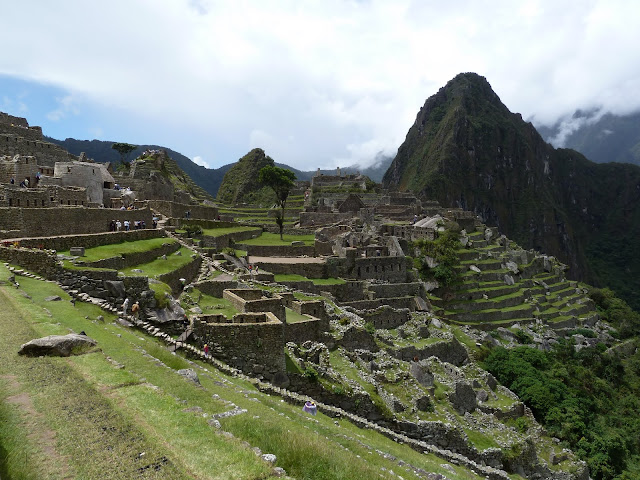 An adventure to Machu Picchu (“New Mountain” – not the Incan name) defines most trips to Peru, and it certainly is the nation’s star attraction despite it’s relative inaccessibility, somewhat pricey tour options, and the fact that is is merely the best surviving Incan ruin and not necessarily their most impressive work. However, high atop a precarious mountain, hemmed in by a raging river and a hydroelectric power station, sits an impressive and well-preserved city-state amidst swirling clouds and ample rains.
There are several ways to access Machu Picchu, but of course being the thrifty vagabonds we are we chose the cheaper yet semi-adventurous option. The government-run Incan Trail was prohibitively expensive, while solely taking the train lacked adventure, so we opted for the 3-day 4-night Inca Jungle trip. Offered by virtually every travel agent in town, the whole tour was mysteriously disconnected from the operator, and we felt the effects of the shoe-string price often. For $165 (saving ~$30 on our admission thanks to our ISIC student cards) we got a lot of promises that were mostly delivered.
We departed from Cusco*, in a packed 12-person tourist van, along with our fellow adventurers from across the globe: two Argentinians, an Australian, two Brits, two Chileans, two Germans, and we three Americans. We ended up meshing quite well and had a lot of fun together, despite the language barrier with the South Americans. 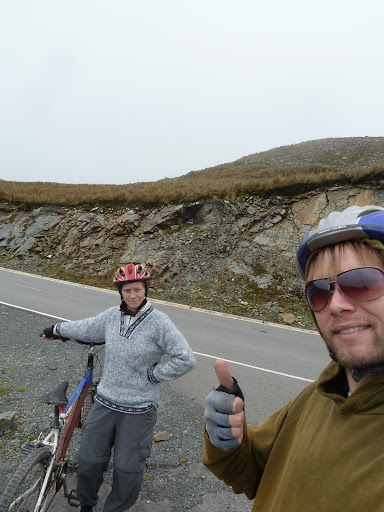 Ready To Conquer The Mountain (Downhill)

Our first day ended up being 4+ hours in a van and a 2-hour downhill mountain bike ride, essentially the opposite of what our travel agent had said. The mountain scenery was rugged, and we started our descent from Abra Malaga (4350m) amidst the clouds, however soon the chilly air added a bit of a drizzle, which then turned into a torrential downpour. 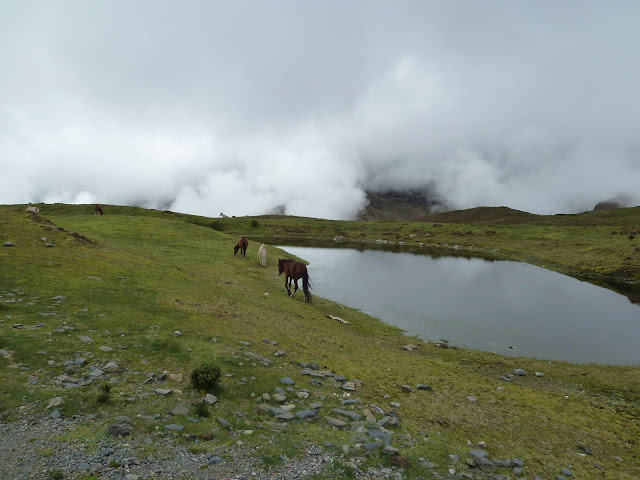 We would’ve been wet regardless due to the numerous streams we had to cross, some of which were several inches deep, but we ended up being completely drenched when we finally reached the bottom of the mountain in the town of Alfamayo. The ride was still fun, but the weather dampened things a bit (ha), and then that was compounded by the fact that our driver insisted on our departure without giving us time to change out of our wet clothes. We slowly dried up a bit in the back of the van, especially after a hospital stop in a neighboring village for one of the Argentinians to get his arm stitched up, but everyone was still damp by the time we finally arrived in the village of Santa Maria. The hostel and food, two key concerns, ended up being more than adequate, though one of the Germans had her hiking boots stolen out of the hostel window while we were gone to dinner. 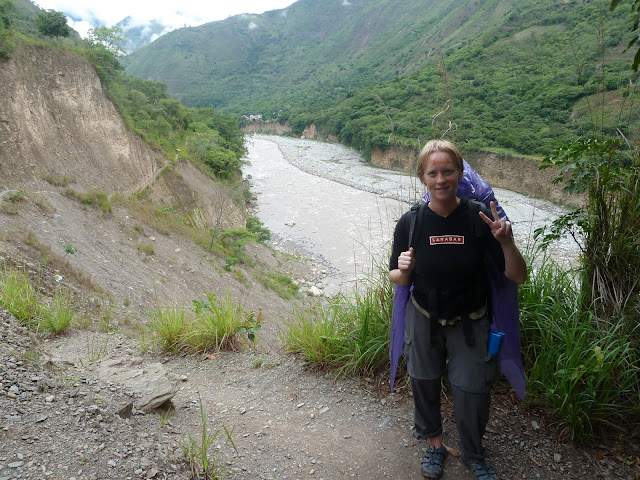 Hiking Along The River

The second day was almost all spent hiking, about 3.5 hours of actual walking before and after lunch. We walked a bit on the traditional Incan Trail, sturdily-built out of stones on the edge of a massive drop: 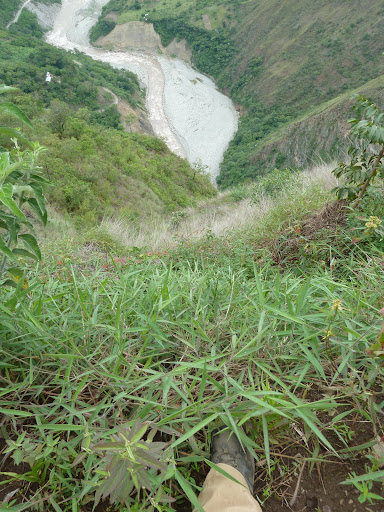 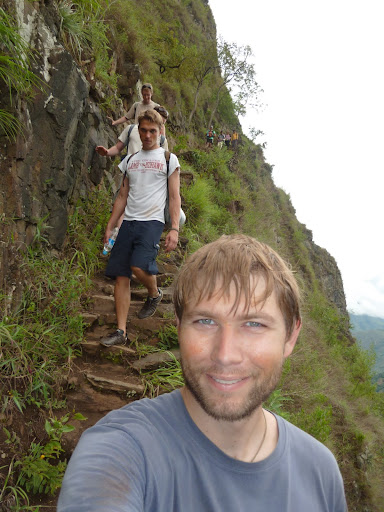 Coming Down The Mountain! 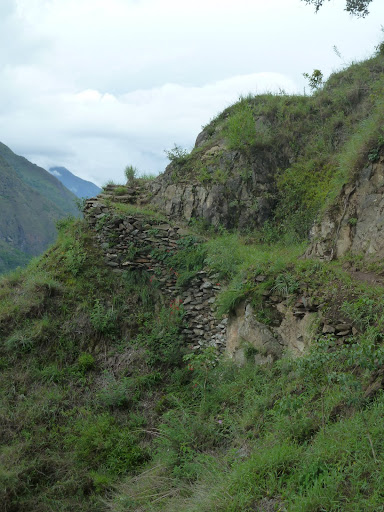 What The Incas Built

We also got shown some of the abundant plants, from dyes to potatoes to edible stems filled with water. It was at times an intense uphill hike, and the trail was never wide, but mostly the walk was relaxing and enjoyable. By the time we got to Santa Teresa our group had separated a decent bit, so we drank beers outside our hotel while waiting. Dinner was alpaca steaks, tasty but not much different from other meat, and then we went out dancing for a while. Everyone ended up partying a bit too hard, especially our tour guide who overslept breakfast by over an hour. As it turned out the morning’s planned hike never occurred, instead going on a zip-lining side expedition. We got driven directly to lunch from there since a new bridge had just opened up, but the food was salty and featured some sketchy-looking chicken, before spending our three-hour afternoon hiking alongside the train tracks leading to Aguas Calientes. 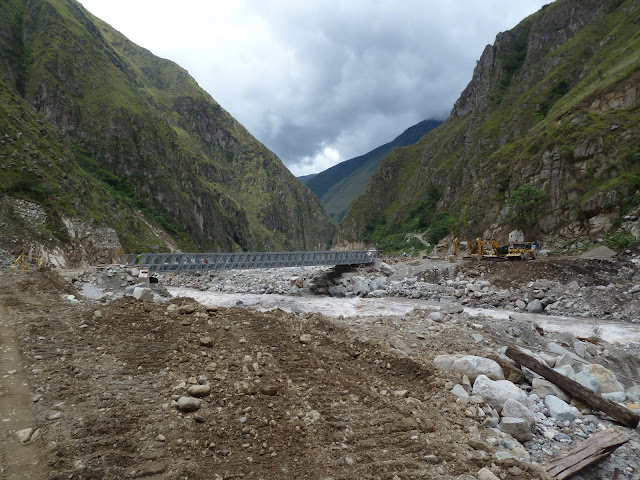 It Really Was Still Under Construction

Every time we hiked it rained off and on, ponchos were in a constant state of flux, but a hard drizzle was about the worst we ever faced. Thankfully the dirt/stone paths remained solid and non-slippery, so we were able to keep up a good pace. 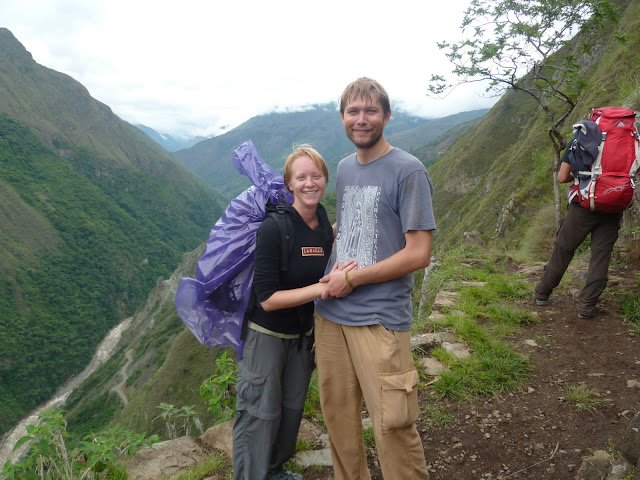 We Rotated Who Was The Sherpa

Our hotel in Aguas Calientes came through with what we needed most, a hot shower, although we had to go to a different room since ours was broken. Another good meal, perhaps the best, with our choice of an appetizer (stuffed avocado/chicken salad), a main course (fish), and then a beverage (juice/tea). We got our admission tickets, met our Machu Picchu guide, and received our time schedule. We tried to keep it an early night since we had to wake at 4am to begin our hike, but excitement kept us up until midnight. The first part of the hike was on the road, and downhill, where we then had to show our tickets in order to cross a bridge over the Urubamba River. Then the challenge began, about an hour straight up the mountain mostly on stone staircases. The dark wasn’t much of an issue but the hike was sweaty and humid as our body temperatures bounced every which way. At the top a line had developed, hundreds deep soon after we got there, especially once the bus-loads of people also started arriving. Being early is important, only 400 people a day get a special Wayna Picchu (“New Mountain”) stamp in two shifts at 7am and 10am. We got the stamp, for 10am, which would let us hike up to a lookout point full of ancient stone constructions and killer views/photo ops. 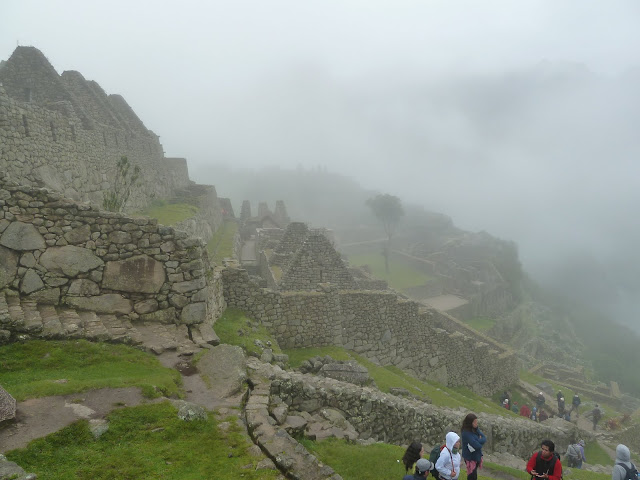 Ruins And Tourists And Mist

But first we had a two-hour guided tour of most of the site, wandering amongst terraces and stone walls. We saw some pretty sweet animals as well, of course the iconic domesticated llama: 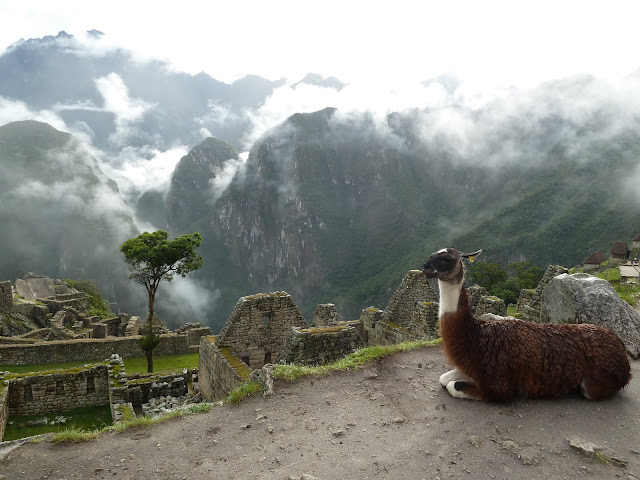 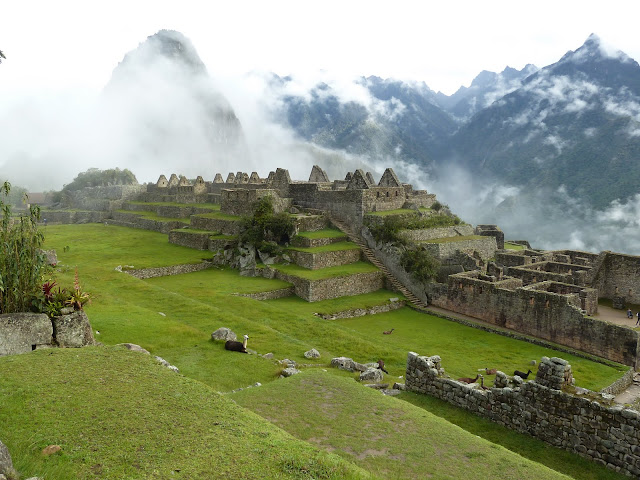 ... And They Happily Posed

and also some wild chinchillas: 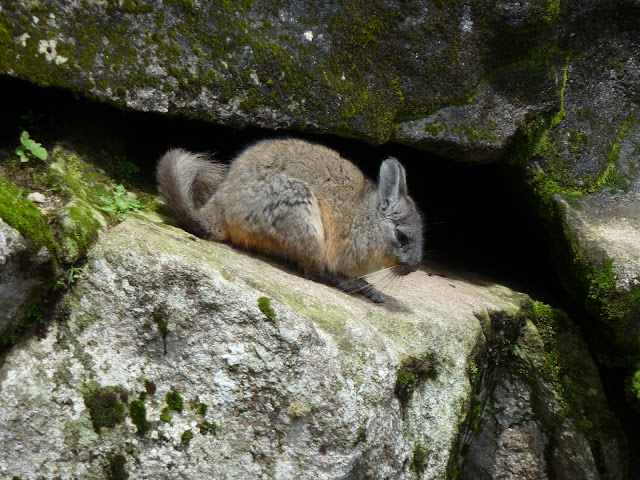 At an altitude of 2300m, Machu Picchu is on the top of a high mountain, in a variety of extremes. The altitude and the weather provided excellent conditions for crops, but the landscape was so inaccessible that this part of the world remained hidden from knowledge from the 16th century up until the early 20th. For more info on it’s “re-discovery” read about Hiram Bingham and The Fights of Machu Picchu.
While we were there the weather fluctuated, sometimes raining and other times sunny amidst blue skies: we managed to both get wet and sunburned, while also working up a sweat exploring. Wayna Picchu provided some fantastic views indeed, made even more impressive after the 45-minute climb up to it’s peak. Small steps, steel ropes, and slick rocks made the going a bit tough at times, but it was definitely worth it: 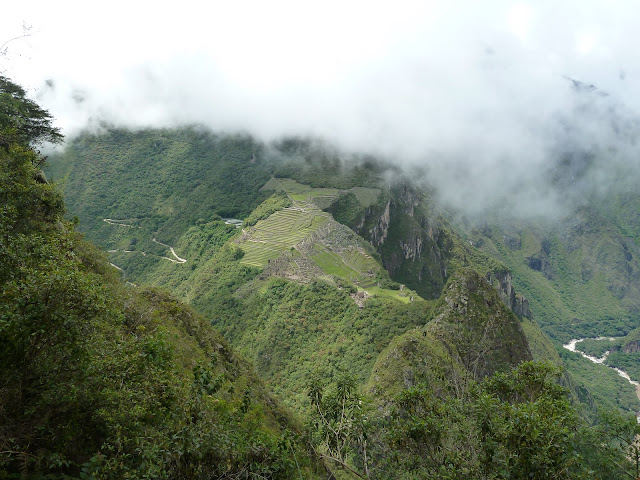 Machu Picchu Amidst The Mist 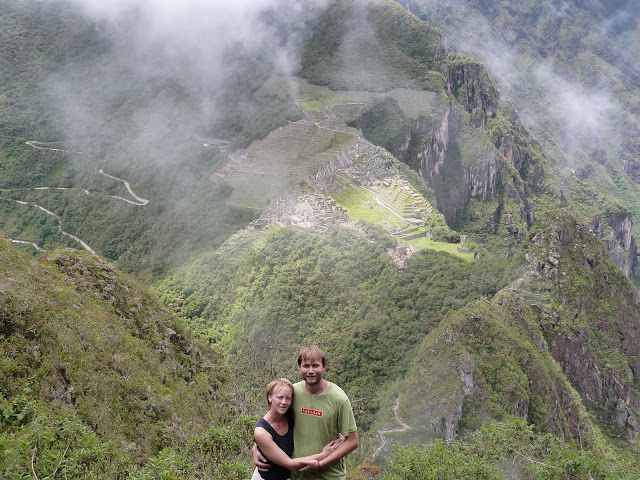 Us And Machu Picchu Amidst The Mist

We spent a good while wandering about on Waynu Picchu, enjoying the changing views, the active clouds, and our exhausted sense of accomplishment. After climbing back down, which went faster than expected, we wandered through Machu Picchu again, before heading back down the mountain in the early afternoon. The endless stairs were by then a bit painful, as knees and calves were well-worn from all their recent activity. After our walk back to Aguas Calientes we found solace in a well-haggled pizza and beer deal, of which both tasted amazing. It was nice to escape the rain for once, though we didn’t escape a bit of drama as it seemed for a while we wouldn’t have train tickets. Our tour guide was supposed to have left them at a restaurant for us (already a great situation), but they weren’t there even after we checked back several times. Finally he showed up, drunk, with the tickets in hand, even though he was supposed to have left on the morning train! With our remaining time we had some dinner, and then caught our 7:30pm train from Aguas Calientes to Ollantaytambo. From there we, along with maybe a hundred other tourists, were piled into buses and vans for the two-hour ride back to Cusco. We arrived right about midnight, weary and glad to be “home!”

2 Responses to Our Journey To Machu Picchu