We were laying low while in Peru, that’s what the combination of plenty of time with little money will do – but then we’ve had a complete change of pace returning back home to the USA. Now we’re finally back in Colorado, where we’ll be for about another week before heading to Wisconsin just in time to see the Green Bay Packers play in the Super Bowl! But before all of that …
We spent five nights in Arequipa, the next Peruvian city south of Cusco, which was a fun place to relax, focusing on eating food and looking around the town. We did manage to catch a day of the South American U-20 World Cup Qualifying Tournament though: 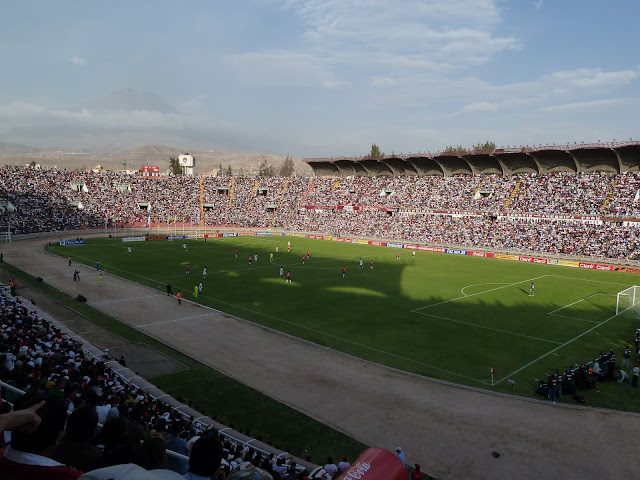 U-20 World Cup Qualifying Beneath A Volcano

Truly our last ten days in Peru were a bit boring per se, but we still had a lot of fun playing cards, Carcassone, and hacky-sack, while also working on our (truly) international job search. Now, for what you’ve been waiting for, our final touristic adventure in Peru – flying over the Nazca Lines in a five-seat Cessna plane! 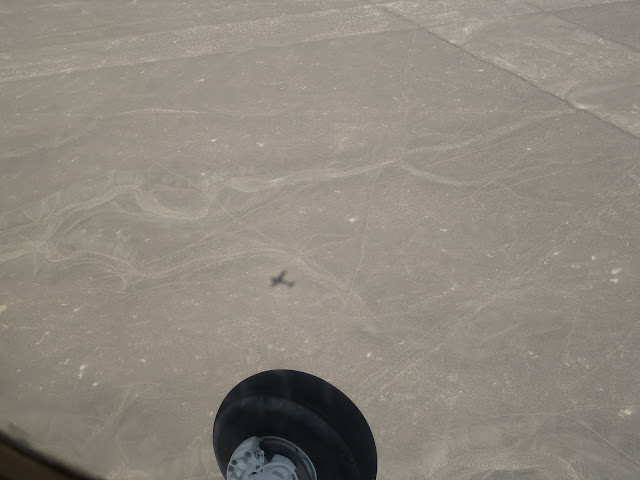 Our Shadow Amidst The Lines The First Animal We Saw: The Whale

The Nazca Lines are over 1500 years old, and were created by carefully turning part of the soil over to reveal a different color of material. Lots more information, that doesn’t have much to do with alien conspiracy theories, can be read here:

Nazca Lines on Wikipedia, and an explanation of ALL the possible explanations including Pseudoarcheology. 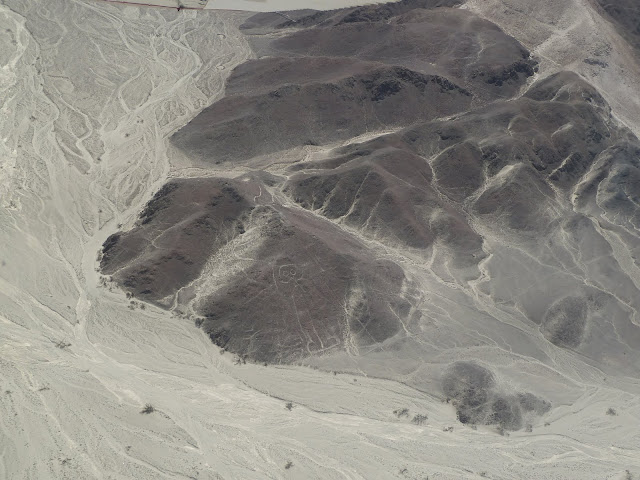 A Spaceman On The Mountain 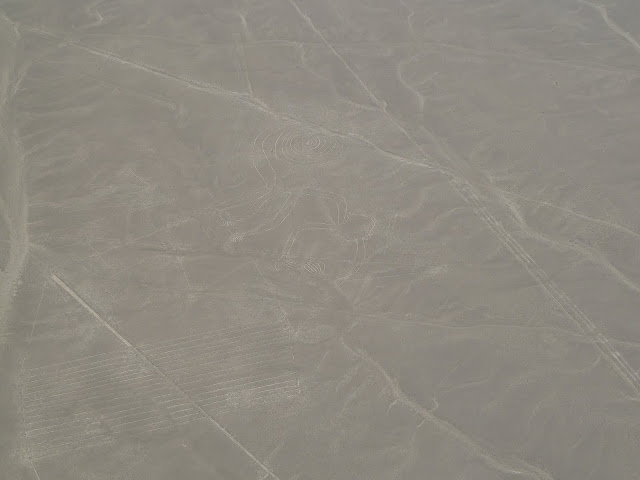 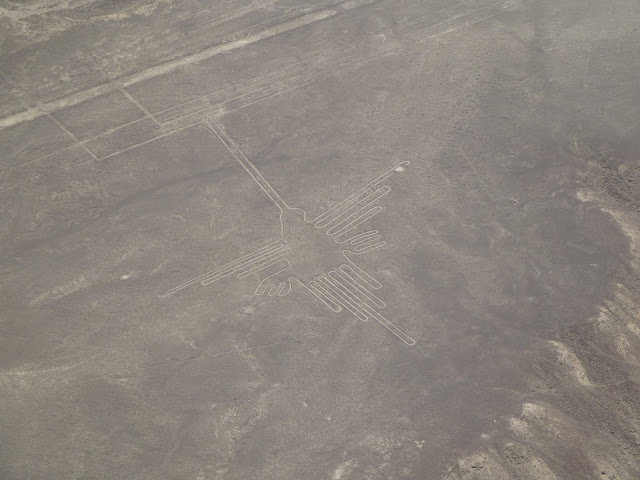 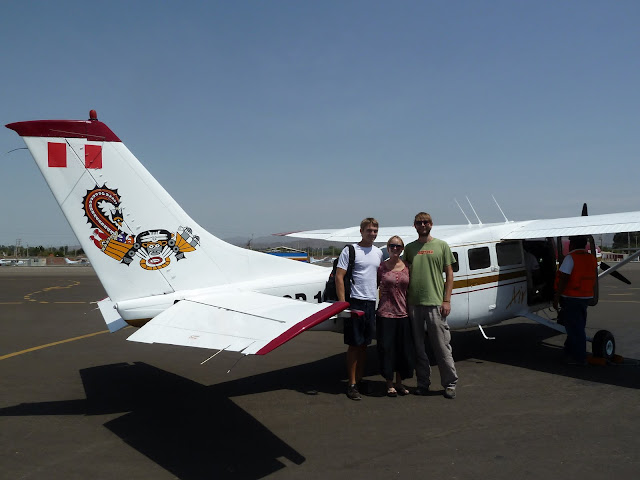 After Our Flight, Safe And Sound

We spent a few more days in Nazca, before having to say goodbye to our travel partner Alan – he’s going to continue to travel throughout South America for some months to come, starting with more Peru, Chile, and Argentina. We wish him the best of luck and safe travels – we had a great time traveling, shared a lot of cool experiences, and perhaps even imparted a bit of travel wisdom!
From Nazca we took an overnight bus to Lima, where we spent our final day in Peru. Definite highlight was the ceviche lunch we indulged in, though Liz’s pedicure and Anderson’s haircut weren’t bad either and were much more necessary! We had an early morning departure time, and everything went smoothly with our taxi ride to the airport, check-in, etc. 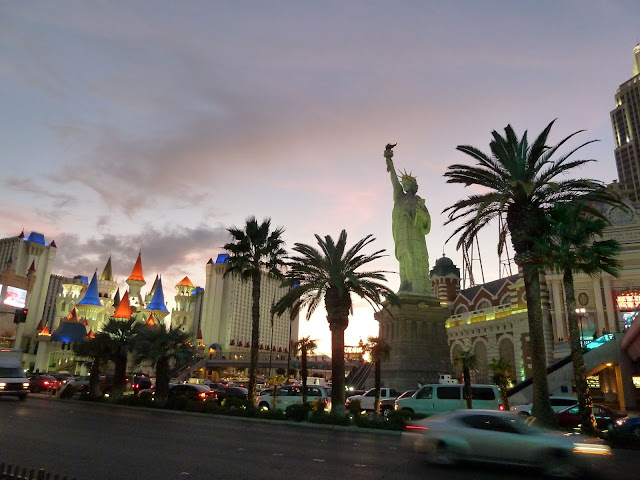 View Of The Strip At Sunset

Our return to the US took us on an interesting route – our super-cheap tickets on Spirit Air took us from Lima to Ft. Lauderdale, and then onto Las Vegas. Since Anderson’s cousin Reannon (who traveled with us in India & Nepal a few years ago) just moved there, we figured we’d spend a few days with her before flying Southwest back to Denver. So we spent three nights in Vegas, though only two full days, and managed to squeeze in a lot while sticking to a tight budget. We did check out a timeshare presentation (not really as bad as they are made out to be, though you do have to say “no” a near infinite number of times) in exchange for discounted show tickets. We saw two shows then, a hypnotist one night and a Sin City Comedy the next. Got a massive buffet as well, which was pretty delicious. 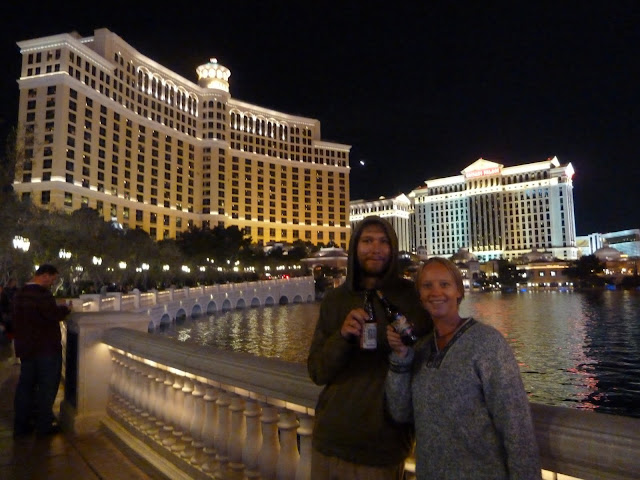 Enjoying A Taste Of CO & WI Outside The Bellagio

Wandering around The Strip was pretty crazy, definitely a different world from Central and South America, and really most anywhere else in the world as well. Vegas knows no proportion, thinks no theme is too gaudy, and attempts to provide everything, everywhere, all the time. An interesting place to say the least!

We aren’t really experiencing much culture shock, just feels great to be back home, though it’s a bit strange having our future so up in the air – hopefully things will start coming together in the near future…