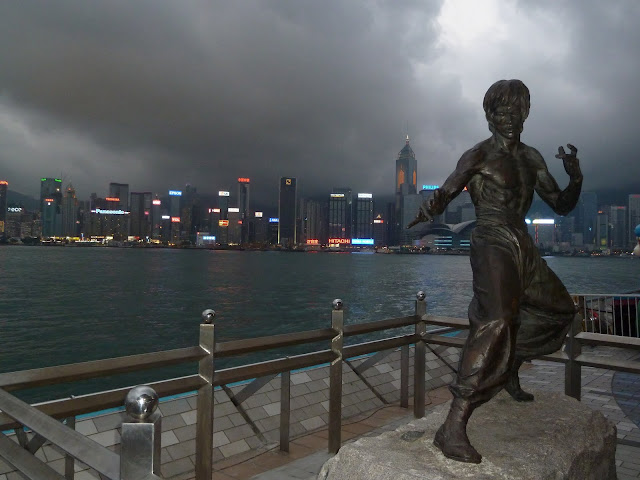 Bruce Lee, Too Awesome Not To Feature... Sorry Buddha

So today was (is) Buddha’s Birthday, a national holiday here in Hong Kong as it is throughout much of Asia.Â  Initially we’d planned on attending the infamous Cheung Chau Bun Festival, but this morning we (consciously 🙂 decided we’d rather not spend the whole day (from 9am to past midnight) on a crammed island waiting to watch a dozen people race up an artificial tower to pull down edible buns.Â  We know, sounds epic – we promise we’ll do it next year – just felt like having a low-key day instead. 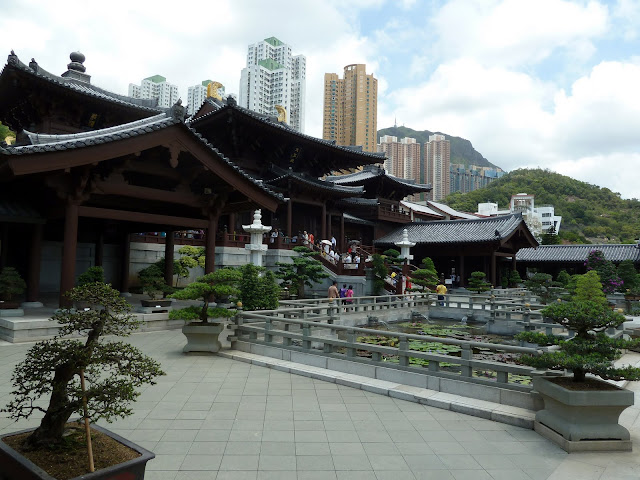 Instead we went to the neighborhood of Diamond Hill, primarily to see the Chi Lin Nunnery, but also for the neighboring Nan Lian Garden.Â  Both are quite modern but with an ancient appearance, well-maintained and at least today were well-populated.Â  The nunnery is known both for its Tang Dynasty-inspired architecture and its vegetarian dim-sum, both of which we sampled.Â  Former was better than the latter, but that’s not to knock on the food: it was still delicious they just didn’t actually have that many options – perhaps due to the holiday crowds. 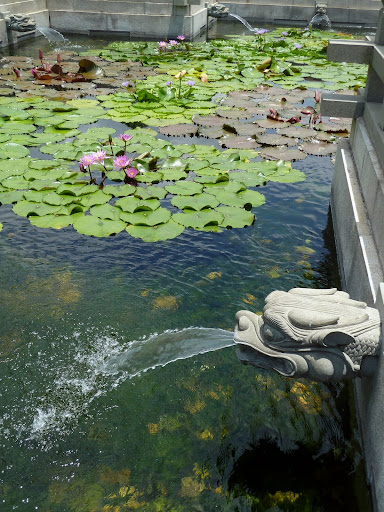 Had the privilege of bowing to and then washing a tiny Buddha statue inside the main hall, a ritual the nunnery apparently offers to all visitors.Â  Wasn’t allowed to take an explanatory photo, but basically there’s a gold-colored Buddha, surrounded by a plastic shield, with a water fountain setup behind him, and then up front is a trigger to be pressed in between a pair of prayers.Â  In addition to having plosive power, the scene evoked more than reverential emotions alone, but at least all the statuary is kept constantly clean! 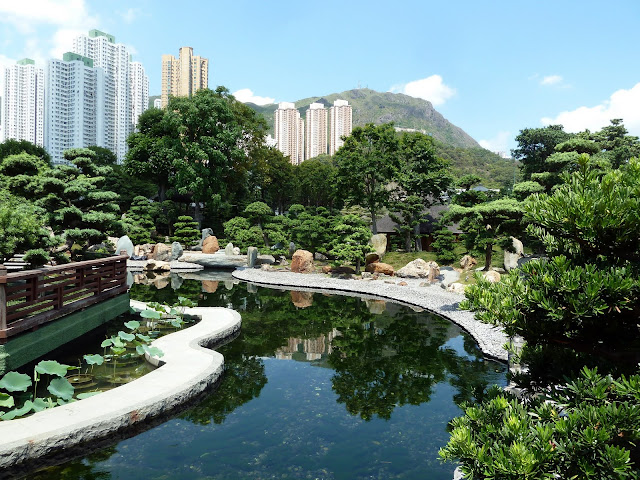 As for the garden, it was less crowded, immaculately groomed, and full of peace, quiet, and nature.Â  Artificial ponds, structures, trees, and rocks form most of the landscaped park, which is run by the nunnery and includes its gift-shop and upscale tea-room as well as an exhibition hall that featured some pretty impressive paintings and recreations from the Mogao Caves in north-west China.Â  If you’ve got time, check out these cool pictures from The Getty Conservation Institute! 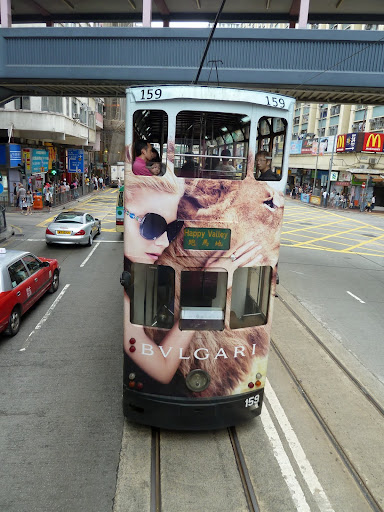 The Tram Runs Only A Block From Our Apartment

Otherwise we’ve been busy working, cooking, and relaxing, living life here in HK.Â  Our friend Zoe visited us from Korea last week (her photos are viewable on Facebook of ‘our life’), which meant we did a bit more touristing than usual.Â  Checked out some new shopping districts, the Avenue of Stars in Tsim Sha Tsui East, and ate plenty of delicious food. 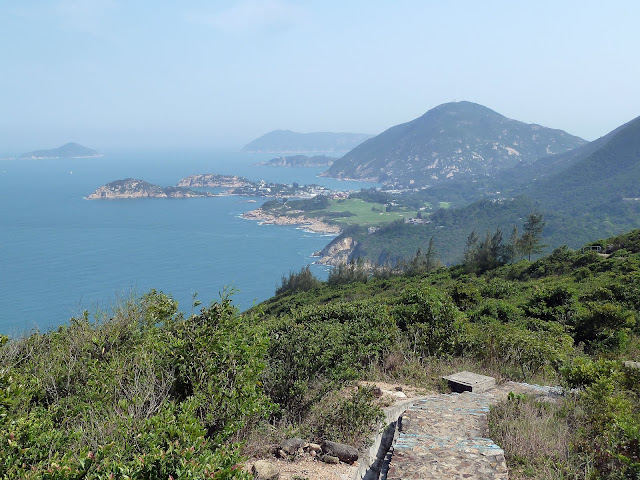 View From Dragon's Back, A Hiking Trail Near Chai Wan

Also gone hiking a few times, as well as walking along the nearby Aldrich Bay Promenade.Â  Our local Indian restaurant, Ashoka, is still treating us well, as is a nearby Chinese place and the neighborhood’s Taiwanese dumpling house – plenty of good eats in Sai Wan Ho, and we’ve hardly tried any of them yet…

We’ll be trying to post more regularly now that we are fully settled in, work is becoming routine in an enjoyable way, and we’re finding a good balance in our life.Â  Here’s a recent photo of us in our living room, short hair for both of us: 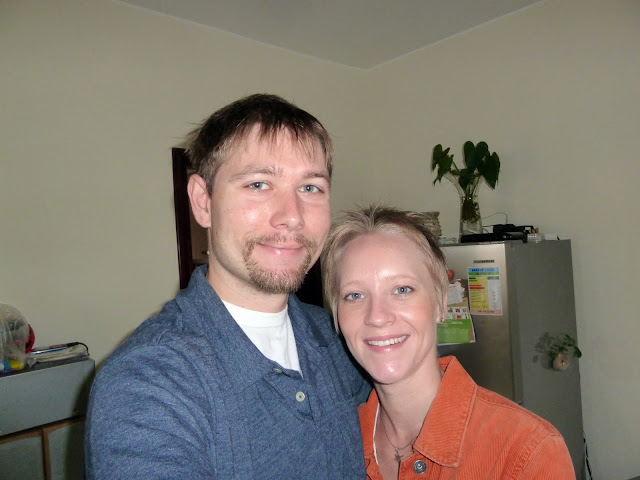 In Our Living Room 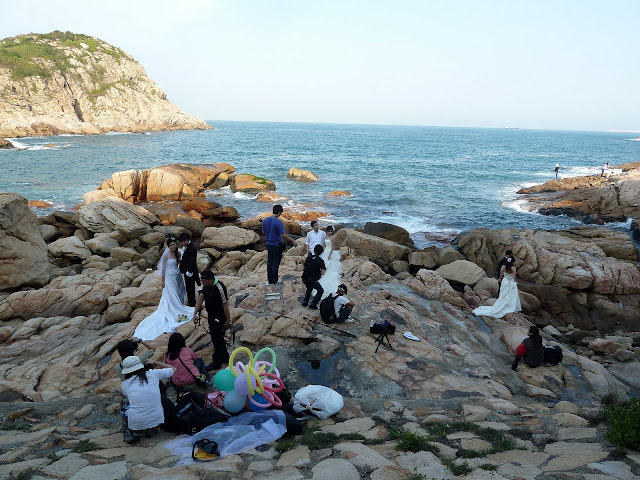