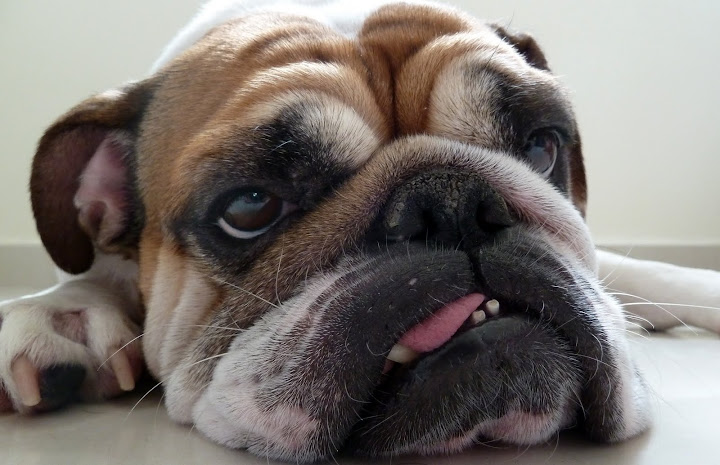 Hi, My Name's Joey. Nice To Meet You!

Since we just put in a lot of research time, and checked out all the available options, we thought telling our tale might help out some future pet adopters, rather than just publishing endless photos of our adorable and sweet British Bulldog, “Joey.”Â  You’ll still get a lot of pictures though, don’t worry!

We knew upon arriving in Hong Kong that we wanted to adopt a dog – we haven’t had one as a married couple yet due to our tendency to be out vagabonding, but moving here has meant a practical shift in priorities as we need to get out of debt, build our careers up, and do all those things you never seem to think you’d want to be doing until suddenly you are.Â  Living in an apartment rules out both large dogs and high-energy dogs, and since enduring potty-training also sounded a bit wearisome we ruled out puppies, focusing on smaller adult dogs from laid-back breeds. 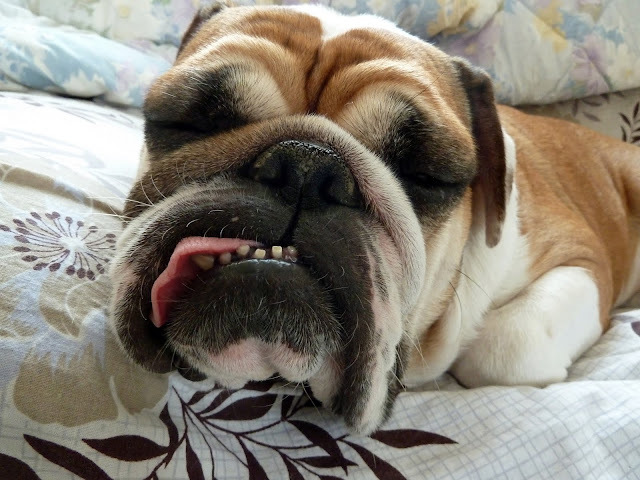 Losing The Battle With Sleep

We began our initial dog search in March, after familiarizing ourselves with the three private dog rescue groups:

We spoke to Jacqui on the phone with PALS, but the call didn’t have the best reception and we never heard back from her… could’ve easily been either of our faults, but we ended up pursuing the other options so we don’t have much room to comment either positively or negatively.

Twice we established email contact with LAP, during both of our serious search efforts.Â  First time ended because we thought we’d found our perfect dog, second time ended because they never got back to us about meeting a potential canine candidate.Â  We communicated with Sheila, Jen, and Belle, all of whom seemed sincerely nice but perhaps a bit preoccupied.Â  We have heard great things about LAP from other people, it just didn’t seem to sync up for us, so we’ll never know if that dachshund would’ve been the dog for us…

HKDR was our initial choice: we’d heard good things about them, Sally responded to our emails well, and their regularly updated Facebook page meant that we could check out all the available dogs easily.Â  Without going into excessive detail, we adopted a dog from HKDR, an situationally-aggressive male corgi who had severely under-emphasized food guarding behaviors.Â  His initial cuteness wore thin as his behavior worsened – first he just growled by his bowl when it had food, then he guarded the dish when there wasn’t any food, which logically led to protecting the kitchen where he correctly deduced the food was stored.Â  After consulting the online experts (ha) we tried hand-feeding, which resulted in Anderson getting attacked, and our email to HKDR for help was responded to with a request for us to return the dog.Â  Apparently they feared precisely this scenario, based on his earlier behavior, but had hoped he would behave well in a new environment.Â  While returning to farm-life (and unlimited food) was definitely the best choice for the dog, we couldn’t help but feel slightly taken advantage of, both financially but also in regards to our safety since it appeared the dog’s true behavior was no mystery but all of that was downplayed in order to get him adopted… 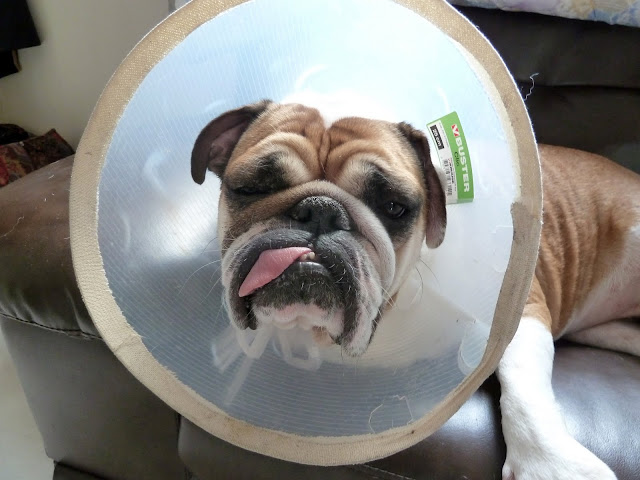 A Certain Someone Kept Itching Her Eye...

After spending a few dog-less weeks “recovering” in a variety of ways, both physically and emotionally, we decided to begin the adoption process over again, much more cautiously the second time around.Â  We decided to include one more possibility, run by the government, which we’d heard mostly good things about:

SPCA (Society for the Prevention of Cruelty to Animals)

As we learned during our second search, the main difference between the SPCA and the rescue agencies is where they are in the proverbial pecking order.Â  All of them have plenty of high-quality animals, taken from private sources who no longer want their pets, obtained from the various government kennels, or strays that have been rescued from the streets.Â  But the SPCA euthanizes animals it deems unlikely to be adopted, while the rescue agencies are all no-kill, which means they take on some of the SPCA’s unwanted animals to give them a well-deserved second chance.Â  This does create a hierarchical system though, with cute and small purebred dogs being the ultimate prize due to their higher chances for adoption and the associated financial windfall.

General adoption rates in Hong Kong range from aboutÂ  (Hong KongÂ  Dollars) $1200 at the SPCA to $1500 with the rescue agencies for purebreds, while mongrels usually go for a bit less.Â  This rate includes vaccinations, sterilization, a vet check-up, but a collar, leash, and all the other prerequisite doggie gear can easily add up to another $1000 depending on food, cage, and toy costs.

Back to our story, over the course of several weeks we tried to see the aforementioned dachshund, kept tabs on the HKDR’s choices, and frequently checked the SPCA’s website.Â  The latter is well-updated, and we twice went to different locations to check out contenders who didn’t quite measure up.Â  Then we spotted this adorable face, and we started to get a bit excited: 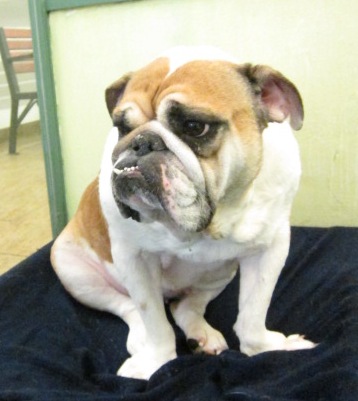 She turned out to be a bit bigger than we’d hoped, weighing in at 25kg, but her friendly personality, enjoyment of affection from anyone, and fun-loving laziness inevitably won us over!Â  After a preliminary visit to the SPCA’s main location in Wan Chai, we placed a two-day hold on her, to give ourselves time to thoroughly think things over. 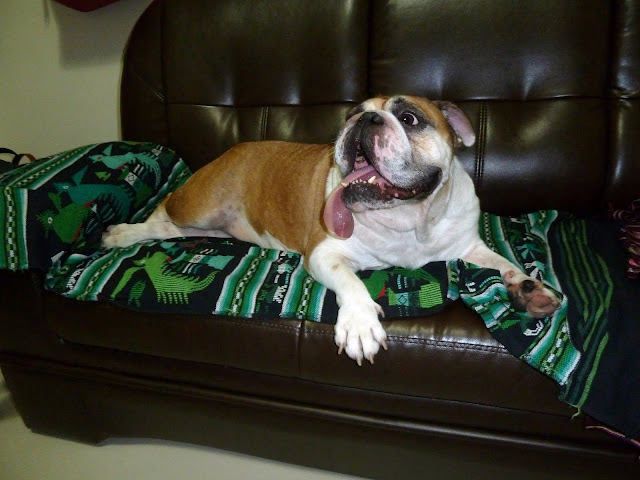 Hard At Work Panting On The Couch

Being patient definitely paid off, as we’ve really found an amazing dog.Â  Joey only had one previous family (she’s four years old), so she’s quickly become an integral, slobbery part of ours, though it took at least a week for all of us to sort out each other’s preferences.Â  She’s all about sleeping in her cage while we’ve sold her on twice daily walks to decrease indoor bathroom usage (which she was previously trained to do); she likes to play tug-of-war and fetch for about twenty minutes at a time while we have to be responsible parents and corral her curiosity to protect the trashcan or our seemingly forgotten shoes.Â  A good balance has been found, and her cuteness is quite irresistible when her tongue and/or snaggle-tooth hang out of her mouth!

Needless to say, we are quite satisfied, and wish anyone else the best of luck on their search for a four-legged friend!

PS – You can vote for Joey as the “cutest dog” at our vet, which she clearly is, and we’ll win a year’s worth of vaccinations!Â  VOTE HERE or click on the photo below: 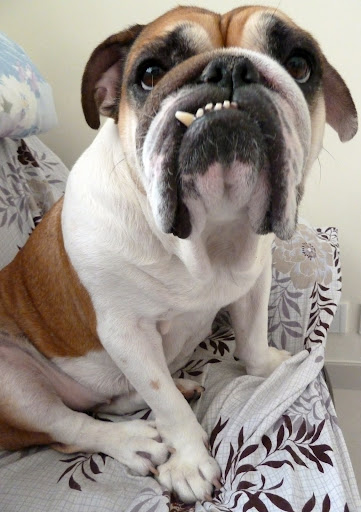 My Tooth Doesn't Fit Into My Mouth!