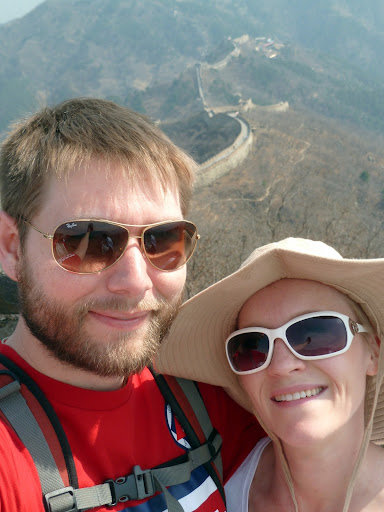 Gettin' Our Great Wall On

We’ve just returned from our Easter holiday in Beijing, which was surprisingly enjoyable, laid back, and all around fun.Â  We spent four busy (but not too busy) days with Anderson’s aunt Aleda and cousin Reannon, who met us for touristing, shopping, and meandering about the Chinese capitol.Â  Our hotel was reasonable, perhaps a bit dirty (apparently vacuum cleaning is not yet popular) but with hot water, clean beds, and a surprisingly good Asian-style breakfast buffet.

We arrived Wednesday night at midnight, so after getting through customs, waiting in the mammoth taxi queue, and dealing with the language barrier to actually get to our hotel, it was about 2am.Â  Thankfully all of our taxi drivers were nice and honest, and when we used the subway it was cheap, quick, and convenient. 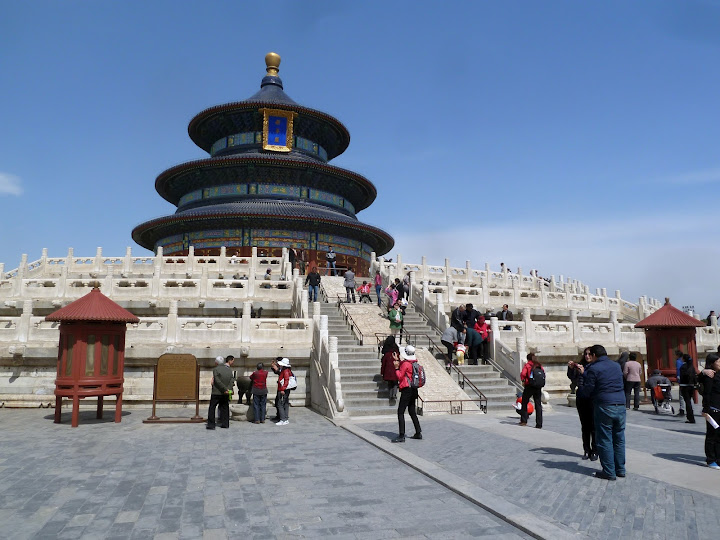 On Thursday we began our sightseeing with the Temple of Heaven, which is set inside a large public park, showcasing some ancient buildings (the first of many).Â  For lunch we had hot pot at Xiabu, which was fresh, filling, and arguably the best and most diverse we’ve ever had. 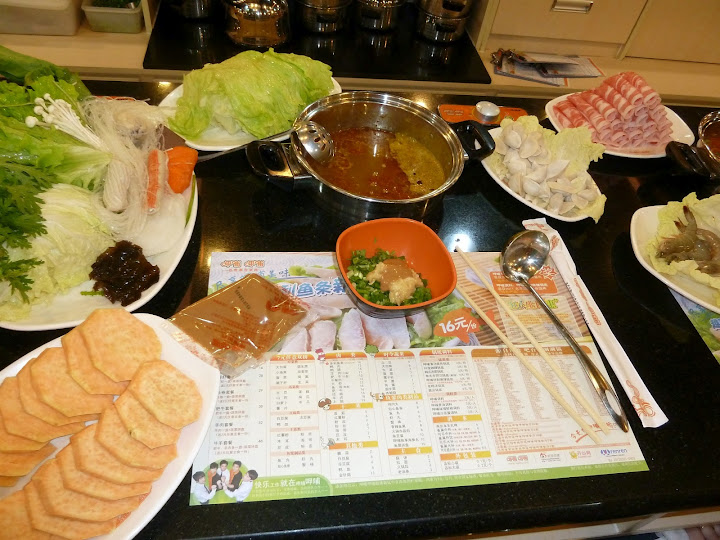 Hot Pot With An Excessive Number Of Extra Ingredients

For the afternoon we explored the active (though slightly fake-feeling) Buddhist Lama Temple.Â  Incense aplenty burned, monks wandered the grounds, and cameras flashed as tourists explored the numerous chambers. Â The main attraction was undoubtedly this massive Buddha: 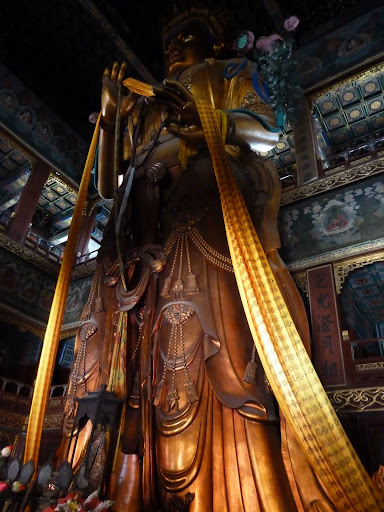 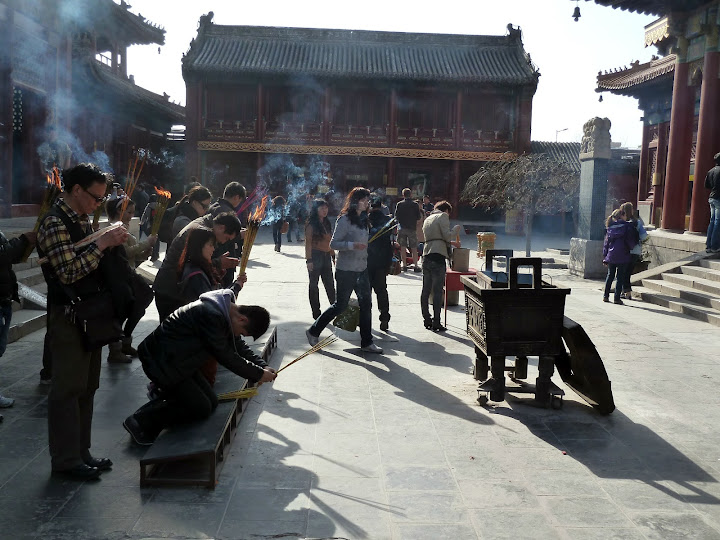 From the subway we wandered the wrong way through “our neighborhood” (near Guomao), but eventually found our hotel just in time to meet up with Aleda and Reannon who had just arrived.Â  Our first proper dinner was the apparently mandatory Peking Duck wraps, which were quite good and crispy though a bit fatty.Â  They carved up a whole duck in front of us, so presentation points must be given despite the restaurant’s overly formal atmosphere. 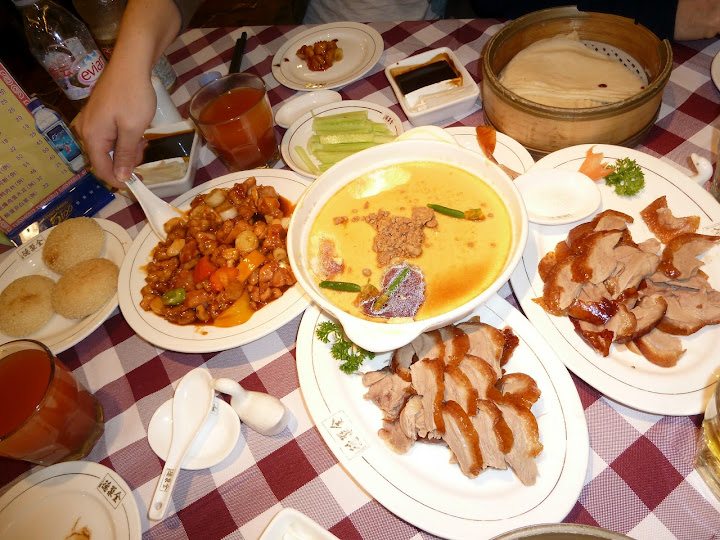 Friday was also busy: after breakfast we headed to the Forbidden City which took about two hours to see most of.Â  Like all the sights, it was a little hectic but not overly crowded. 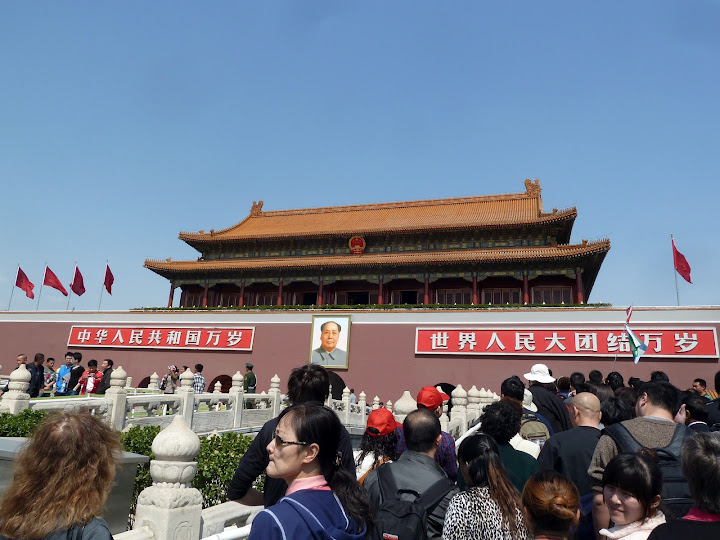 Mao Watches Outside The Forbidden City 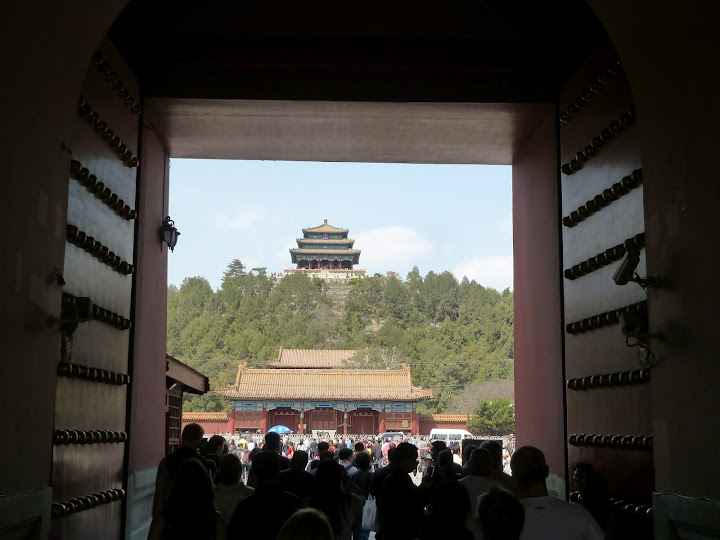 From there we went to the Silk Market for lunch and shopping, where the bargaining was fierce but good prices could be had in exchange for tolerance and endurance.Â  Knock-off brands, presented as the real thing, were thankfully sold at relatively good value once negotiations got past the often ridiculous high starting price.Â  Next up was Tiananmen Square, which meant we went back to where we were in the morning – that was short and sweet since it is merely a large square with an implied police presence.Â  Feeling tired, we booked massages and then had a coffee.Â  After the massage, which was affordable and relaxing, we grabbed dinner at a local corner restaurant which was cheap and simple. 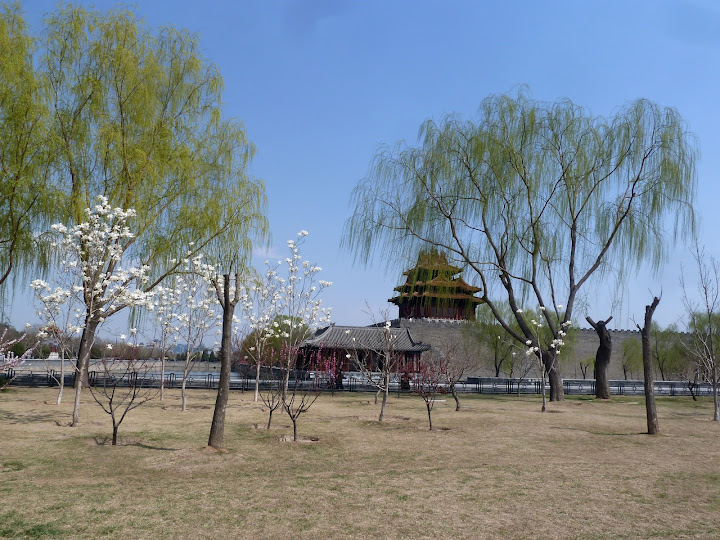 Saturday was effectively the main event as we grabbed a taxi to take us to The Great Wall.Â  Of the many options, we chose Mutianyu since it has a good balance of smaller crowds, some restoration, twisting wall photo ops, and a cable car for easy accessibility. 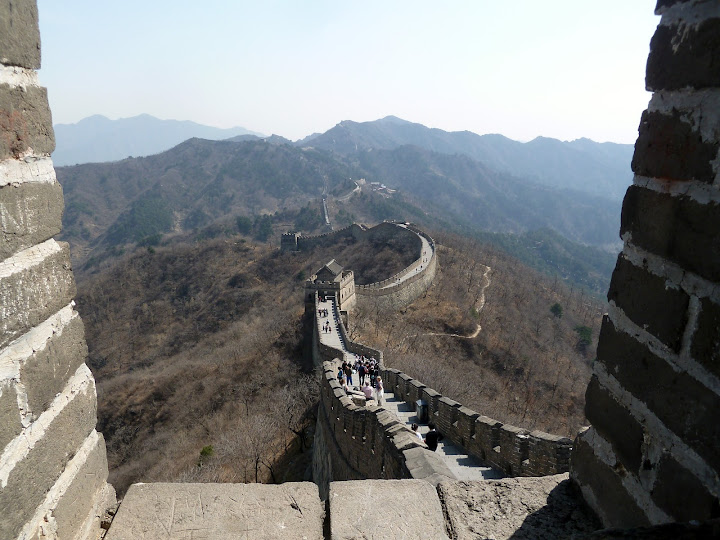 Our taxi driver was friendly, though communication was nonexistent, and he patiently waited while we grabbed Subway sandwiches for lunch, weaved through the ad hoc marketplace, and caught the cable car up to the wall proper.Â  It is definitely an imposing and impressive sight, worth the trip to Beijing without a doubt. 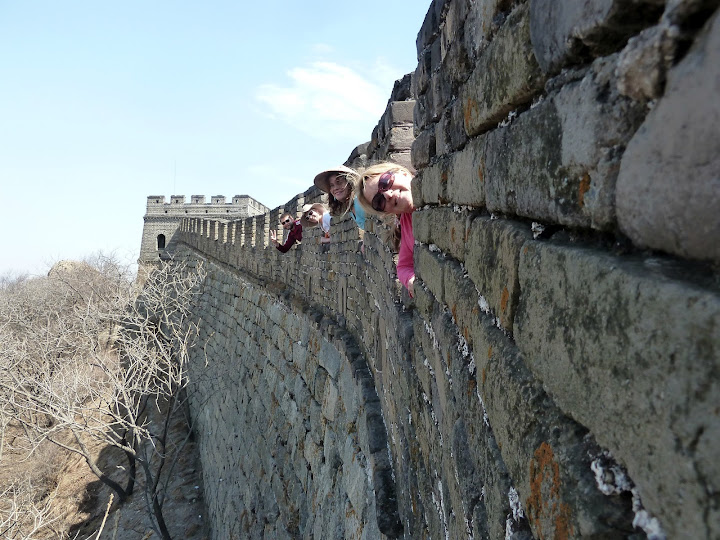 Hanging Out At The Wall 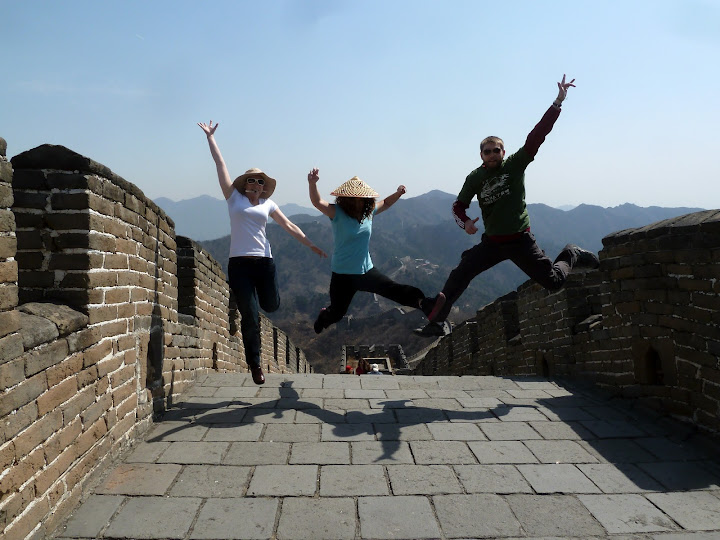 Best Take Of Our "Jumping At The Wall" Series

We took plenty of photos, fun and serious alike, and enjoyed a lunch atop the wall with splendid mountain views all around us.Â  The sun and walking were tiring, so after we’d gotten our view of touristic adventure we took our return trip on the cable car, haggled on a few more products, and then enjoyed the ride back to our hotel.Â  After a much-needed nap, we enjoyed a nice Chinese dinner (fried shrimp, hot and sour soup, lamb and green beans, and potatoes with salted pork). 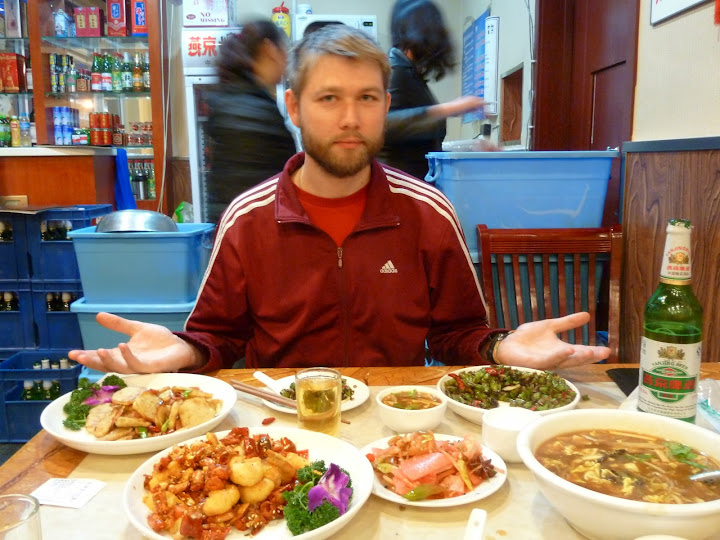 Too Much Delicious Chinese Food

The restaurant was so good that we went back on Sunday night as well since it was just around the corner from our hotel.Â  We then headed out to a local bar, 2 Kolegas, for a surprisingly good live reggae show by multi-national eight-piece band One Drop.Â  The crowd was energized, the mix of originals and covers were well-played, and the band was skilled and clearly having fun. 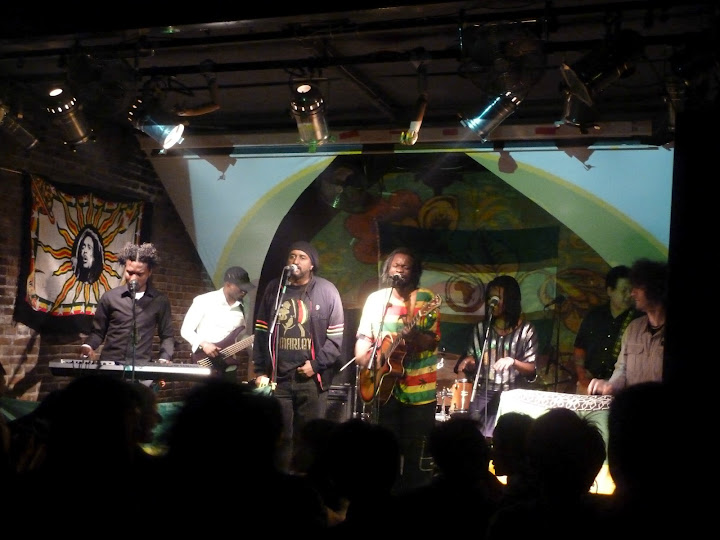 One Drop Performing At 2 Kolegas In Beijing

Our final full day balanced sightseeing at the Summer Palace in the morning (full of expansive gardens next to an enormous lake) with a return trip to the Silk Market to get some bargains we’d missed out on earlier.Â  Liz got some nice work clothes at lower prices than can be had in Hong Kong, and Anderson’s bargaining skills and patience both got tested (but not bested).Â  We were able to use the subway much of the time, which saved plenty of money and perhaps a little time. 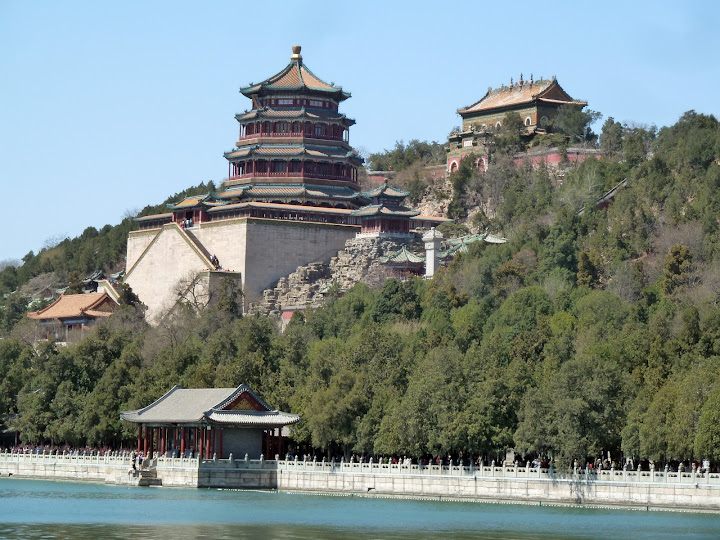 Monday morning was just breakfast and then we headed off to the airport, but having seen everything we wanted to and done plenty more as well it felt like the right time to go.Â  It was great to see Aleda and Reannon – good to catch up and our mix of interests made Beijing much more exciting than it would have been otherwise!

Otherwise life in Hong Kong is normal: busy yet fun.Â  For all your dub/reggae/bass music reviews and needs, please check out Anderson’s music blog alter ego The Groove Thief,Â on bothÂ Facebook and Twitter for your social media convenience. Â He also has a new dub/reggae DJ mix coming out on 19/04 on Mixcloud and Soundcloud. Â A preview remix mashup of some nice reggae tunes is available NOW.

As always, thanks for reading, 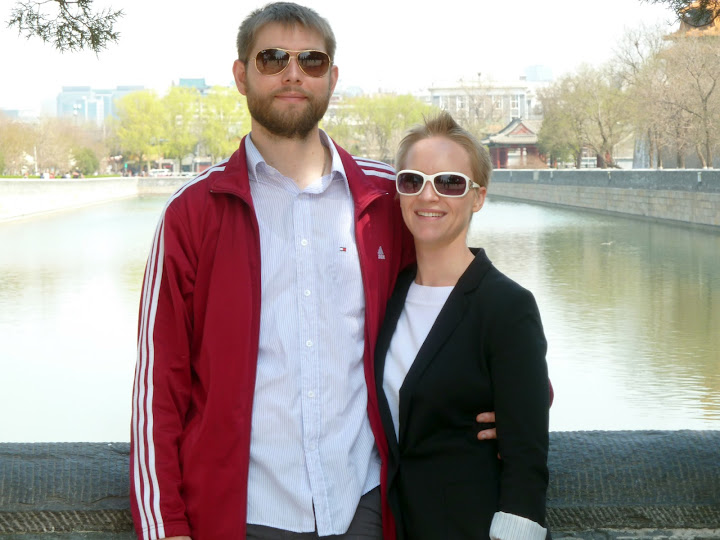 Apparently We Now Dress For Work While Also On Vacation

5 Responses to Easter In Beijing